Arctic blast sending central US into a deep freeze

AccuWeather meteorologists say the expansive blast of cold air could leave more than 90% of the country with below-average temperatures this weekend.

The first official day of winter is still over a month away, but that is not stopping Old Man Winter from making his presence known across the United States. As lake-effect snow piles up in western New York through this weekend, a blast of Arctic air will send temperatures to levels more typical of the middle of winter from the northern Rockies to the southern Plains.

The blast of cold air had already proven to be impressive as of Friday morning. In addition to helping produce a swath of accumulating snow in the Rockies, morning temperatures plunged to levels that are bitterly cold by January standards. Cities such as Denver, Colorado, and Omaha, Nebraska, reached into the teens, while even colder spots such as Casper, Wyoming, had plunged below 0 overnight.

AccuWeather meteorologists say that waves of cold air will continue, and could reach as far as southern Texas. Residents there may need to dust off their winter jackets this weekend. 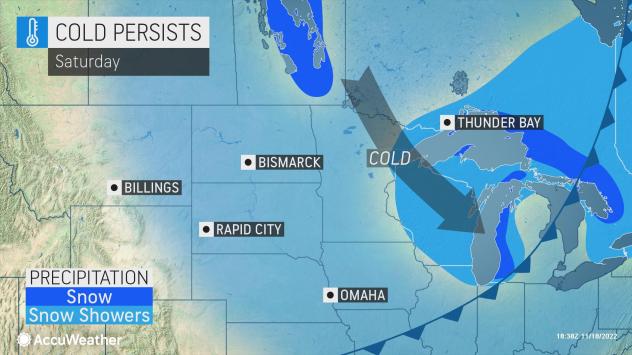 "From temperatures bottoming out in the double digits below zero across Montana and Wyoming to a deep freeze in the South, more than 90% of the nation will experience below-average temperatures through this weekend," AccuWeather Meteorologist Brandon Buckingham said.

As the cold front pressing along the Front Range of the Rockies continued to move south through Friday, the arctic air continued to filter into the Plains and into the South Central states.

High temperatures from Denver to Amarillo, Texas, remained in the 20s while the typical afternoon highs for this time of year in those cities are in the 50s and 60s, respectively. These frigid conditions are normal for the dead of winter, rather than November, and any unprepared residents risked being caught off guard.

"Areas from the Colorado Rockies to southern Texas could see the mercury dip to values 25-35 degrees below normal for this time of year," Buckingham explained.

Friday afternoon continued to remain bitterly cold for many locations as record-low maximum temperatures were challenged from Colorado Springs, Colorado, to Goodland, Kansas. RealFeel® temperatures reached only the lower to middle 20s in cities like Denver, Amarillo, and Oklahoma City.

AccuWeather forecasters say that these dangerously cold conditions will bring the risk of frostbite and hypothermia to those spending time outdoors who aren't properly dressed for the elements.

The wave of arctic air will press into the south-central U.S. on Saturday. 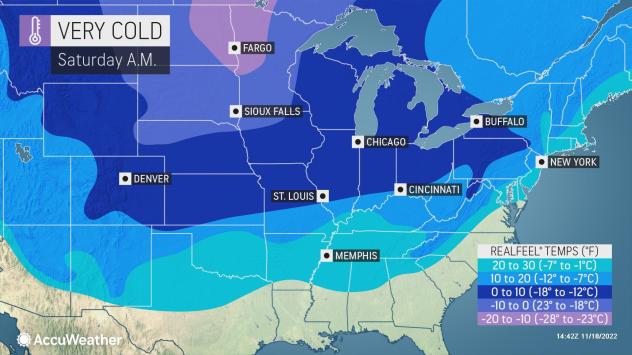 Saturday morning is expected to be a frigid one for many as the coldest air of the season continues to filter into the central and eastern portions of the U.S. The RealFeel® in areas like Fargo, North Dakota, is expected to reach 18 degrees below zero while residents in Dallas will wake up to a teeth-chattering RealFeel® of 24 degrees.

Major cities in central and southern Texas, such as Houston, San Antonio and Austin, will feel the bitter cold as high temperatures Saturday will only reach the 40s with RealFeel® Temperatures expected to settle in the lower 30s.

Conditions this cold have not been felt in most of these areas since last winter. In mid-November, Austin typically experiences high temperatures in the lower 70s, making the high expected on Saturday about 30 degrees below normal. The same will be true in Houston on Saturday with a high in the upper 40s are forecast. A typical high for this time of year in Houston is in the lower 70s.

AccuWeather forecasters say that the harsh cold in the nation's midsection will lessen somewhat by the middle of next week.

"There are signs of moderating temperatures next week across the Plains as an area of high pressure shifts to the east, allowing southerly winds to return," Buckingham said.