Accumulating snow and winterlike chill aim for millions in Northeast

Cold air flows will fuel lake-effect snow squalls and winterlike temperatures throughout the Midwest and Northeast, as accumulating snow will spread from the Great Lakes into New England.

An active storm track from the North Pacific, across the Canadian Prairies and into the Northeastern United States will keep a train of low pressure areas, known as "Alberta Clippers", chugging across the northern U.S. This will lead to more rounds of snow, slippery travel and reinforcing cold shots through the middle of this week from Minnesota and Michigan to Massachusetts and Maryland.

The first of a series of these clippers brought a blanket of snow across parts of Wisconsin and Michigan Saturday. That snow expanded into parts of Ohio, Pennsylvania and New York Saturday night. Some of the snow turned college football games in the Great Lakes Saturday afternoon and evening into a winter wonderland, including East Lansing, Michigan, where a showdown between Penn State and Michigan State was played on a snow-whitened field. 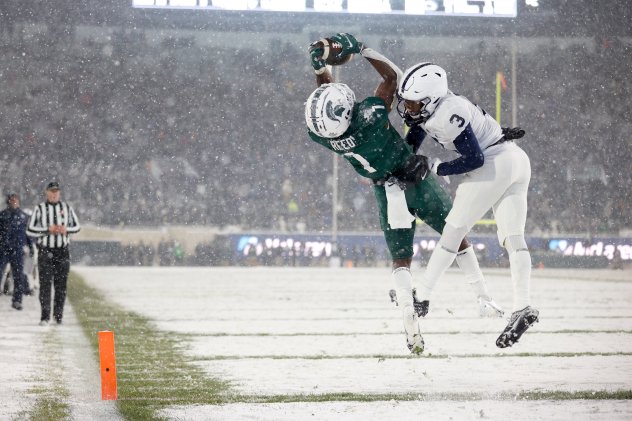 By Sunday morning, light snow was streaking across central and eastern New York toward New England, bringing a fresh coating of snow for many. As the storm progressed eastward into Sunday night, it encountered slightly warmer conditions, largely brought on by the Atlantic Ocean where surf temperatures ranged from the 40s east of Massachusetts to the 50s along much of the mid-Atlantic coast.

As the cold air from Canada and the warm air from the Atlantic Ocean mixed and reached a balance, temperatures largely remained above freezing during much of the storm from southeastern Pennsylvania and New Jersey to the southeastern parts of New York state and New England through Sunday evening. 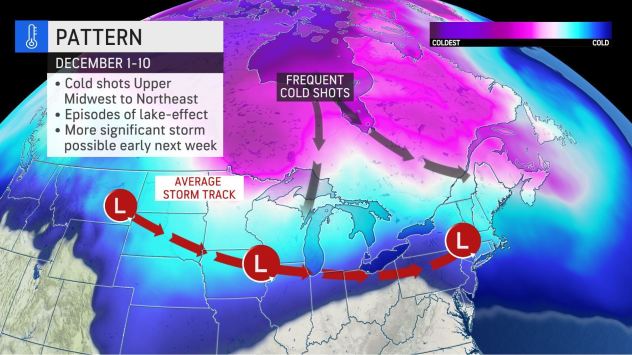 The atmospheric condition resulted in rain, or a rain and snow mix in much of the mid-Atlantic and southeastern New England zone. While most roadways will be wet during the tail end of the storm on Monday from snow showers or mixed rain and snow showers, it is possible for some roads to cool enough to allow slippery conditions to develop, especially outside of major urban areas. A quick light coating of snow or slush can occur mainly on some non-paved surfaces from southern New York state to Pennsylvania, northern Maryland, New Jersey and Connecticut.

As reinforcing cold air flows across the Great Lakes behind this clipper, lake-effect snow squalls will also develop downwind of the Great Lakes on Monday. This can lead to difficult and, at times, dangerous travel in parts of the region, including I-90, I-80, I-79 and I-86 to name a few. 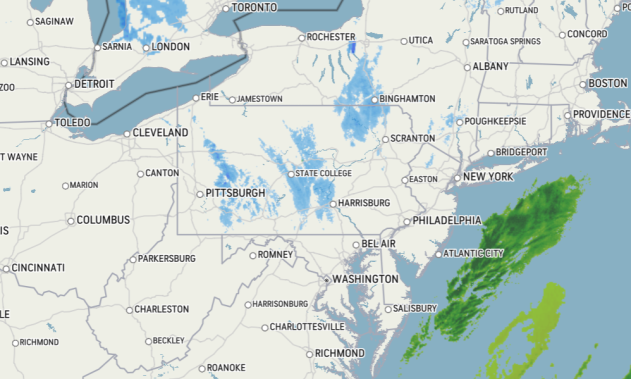 This will also help to boost the snowpack, which is beginning to grow deep southeast of some lakes, as well as in the Adirondacks and mountains of New England, helping ski resorts in the region kick off what AccuWeather's Long-Range Team is predicting to be an excellent ski season in the Northeast. Most of the resorts in interior New England are now reporting base snow depth of 1-2 feet.

Lake-effect snow will gradually wind down Monday, but only because yet another clipper will be sliding from the upper Midwest into the Great Lakes. This system looks to be very similar to its predecessor last weekend, with accumulating snow sliding from the arrowhead of Minnesota, across Wisconsin and Michigan, into the eastern Great Lakes and New England into Tuesday. 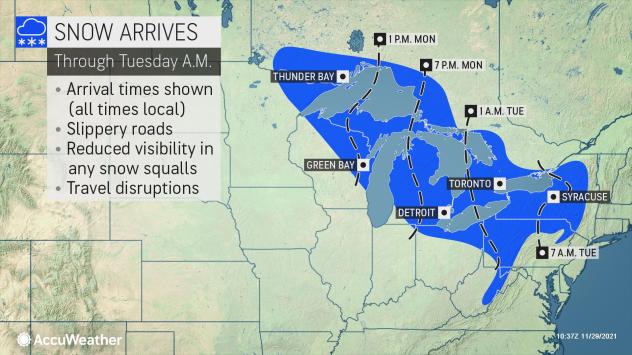 Also, much like the clipper from last weekend, the heaviest and steadiest snow is likely to fall from Wisconsin across Michigan, before the system meets drier and milder air farther east, with snow then becoming lighter and accumulations becoming less. Another brief round of lake-effect snow will follow through Tuesday night, enhancing snow totals once again south and east of the lakes.

While the coldest air and snow will fail to make it far enough to bring the first accumulating snow to most of the I-95 corridor in the Northeast for the time being, below-average chill has still been persistent as well. Aside from a milder day or two, high temperatures for most of the last several days in cities like Boston, New York City, Philadelphia and Washington D.C., have stayed 5-10 degrees below normal. Forecasters say that trend will continue into the middle of this week. 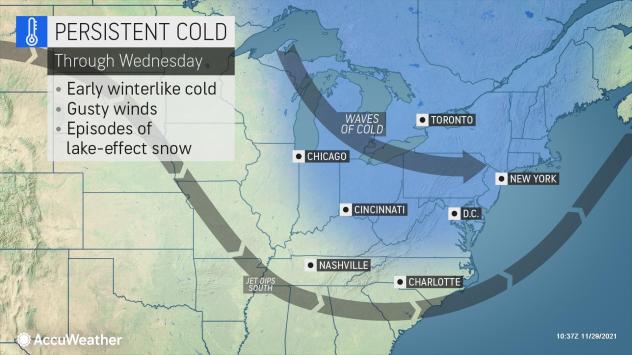 However, forecasters also say a shift in the pattern will allow for much milder air to make a couple of appearances late this coming week. But forecasters also warn this pattern shift could also come at the expense of creating more chances for heavy snow from the Midwest into the Northeast heading deeper into December.