The Cumbre Vieja volcano, located on the Spanish island of La Palma, has been erupting since the middle of September. In addition to destructive lava flows and airport closures, the volcano produced a mesmerizing cloud formation during its eruption on Oct. 4.

On Oct. 7, the La Palma airport was closed for the second time in about two weeks as ash and dust accumulated on the runway.

The latest eruption forced the air above the volcano upwards. This was followed by circular ripples spreading out from the volcano, which could be seen on satellite and was caught on video by bystanders.

Meteorologists have given this weather phenomenon a name: gravity waves.

"As this air is pushed upward, it wants to sink back down in order to remain in a state of equilibrium," stated Duff. "It may take many up and down waves for this state to be reached."

In this case, the waves were made visible by clouds forming, as the air rose and became moist, creating the repeating pattern, like seeing the ripples in the water after dropping a stone in a pond.

Volcanic eruptions aren't the only mechanism that can create gravity waves.

"In the atmosphere, the 'stone' disrupting otherwise calm or stable conditions can be a severe thunderstorm, winds blowing over mountains or cold fronts," Duff said.

The gravity waves satellite photo wasn't the only impressive picture taken of the volcano from above. Planet Labs, Inc., which operates the largest earth observation fleet of imaging satellites, took a stunning closeup of the same day, in which not only the eruption is visible but also the lava which reached the coast last week. 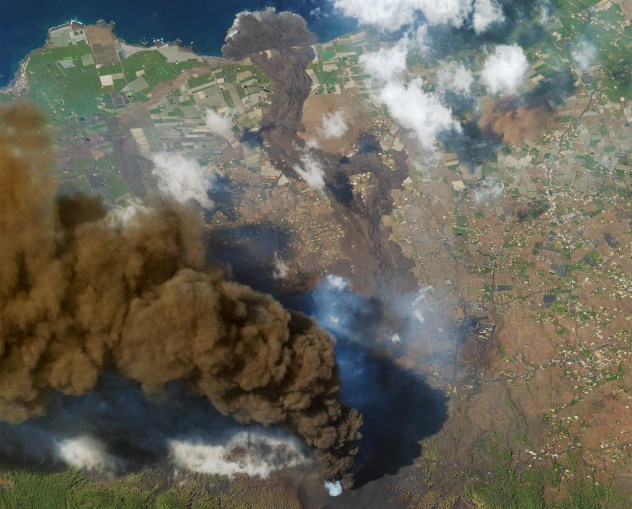 Thousands of residents have been evacuated in the Canary Islands, located off the northwestern coast of Africa, since the Cumbre Vieja volcano began erupting on Sept. 19, according to Reuters. Hundreds of buildings and farms have been destroyed by rounds of lava, but one "miracle house" survived. The eruption came with dramatic footage of lava devouring a pool, filmed via drone.

On Saturday morning, local time, the northern face of the volcano partially collapsed.

Correction: This story previously misstated the location of the Canary Islands. They are located off the coast of northwestern Africa.

Ian will be Florida’s 1st major hurricane in 4 years