The Bormida di Spigno River in Cairo Montenotte, Liguria, Italy, rose to its banks Oct. 4 after Liguria received half a year's worth of rain in 12 hours.

Parts of northern Italy are recovering from a historic deluge earlier this week that produced a new continent-wide record for rainfall over a 12-hour period and left one city with nearly a year's worth of rainfall in one day.

Rossiglione, Italy, located in the Genoa province, found itself in the absolute worst of Monday's extreme rainfall. The city ended up with a mind-boggling 34.8 inches (883.8 mm) of rainfall over the course of 24 hours.

The annual rainfall total for the nearby city of Genoa itself tops out at just over 42 inches, which is fairly representative for the region at large, according to AccuWeather forecasters. This means that Rossiglione recorded 82.9 percent of the average rainfall that falls over the course of an entire year in the region in just 24 hours.

In order to record rainfall totals that extreme, rainfall rates have to be extraordinary, perhaps even record-breaking. 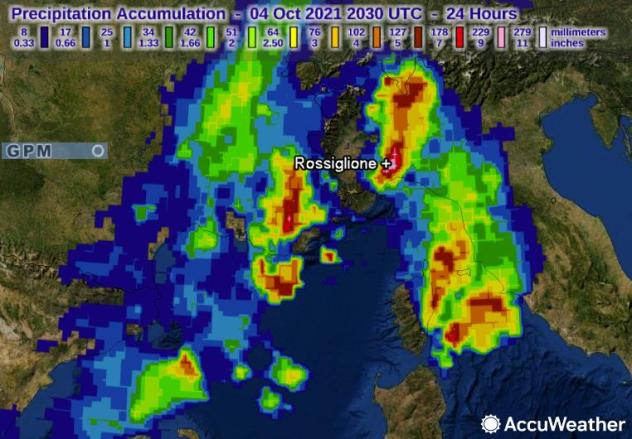 Outside of Rossiglione's new records, at least two other Italian cities set records Monday. The Italian record for greatest six-hour rainfall now belongs to Montenotte Inferiore with an incredible 19.5 inches (496 mm). According to the Regional Agency for the Protection of the Ligurian Environment (Agenzia Regionale per la Protezione dell'Ambiente Ligure or ARPAL), the previous record belonged to Brugnato, Italy, with 18.6 inches (472 mm) in six hours on Oct. 25, 2011.

The Italian record for greatest three-hour rainfall also fell when Vara Superiore picked up 14.9 inches (377.8 mm) Monday. The previous record belonged to Vicomorasso, Italy, when 13.3 inches (336.6 mm) of rain in three hours on Nov. 4, 2011, according to ARPAL.

According to reports from The Associated Press, flash flooding and mudslides were common across the region Monday. No casualties were reported, but at least one bridge in Quiliano, Italy, collapsed following the torrential rainfall.

Genoa, a popular port city, was forced to close its schools, parks, cemeteries, sports facilities and open-air markets Monday as the torrential rain unloaded across the region.

While Rossiglione now holds the European record for greatest 12-hour rainfall, Monday's rain total fell well short of the global record. The global record was set in January of 1966 and belongs to Foc-Foc, La Réunion, with 45 inches (1,144 mm) of rainfall in just 12 hours, according to the World Meteorological Organization. This rainfall was a result of Tropical Cyclone Denise and a meteorological phenomenon known as upslope flow or upsloping. 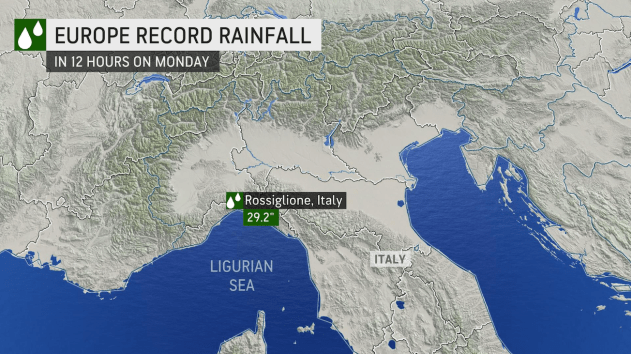 "Upslope flow can commonly be defined as air that is flowing towards higher terrain -- such as a mountain range -- and is forced to rise," AccuWeather Meteorologist Brandon Buckingham explained. "Because of the higher terrain, the air has nowhere to go except up."

When the air is forced upwards over higher terrain, the intensity of precipitation also tends to increase.

While Italy did not need a tropical system to achieve record-breaking rainfall, upsloping was likely a factor for Monday's extreme event.

AccuWeather forecasters say torrential rainfall from a storm moving across southern and central Europe targeted portions of Italy Monday and unleashed significant flash flooding issues. Italy's Liguria region, which is located in the northern half of the country and borders the Mediterranean Sea, was in the bull's-eye for extreme conditions.

The Liguria region wasn't the only portion of Italy in the line of dangerous storms early this week.

A possible tornado tore through downtown Catania, Sicily, on Oct. 5, 2021. Damage from flooding and high winds was reported.

Tuesday's storms also caused flights to Catania–Fontanarossa Airport to be diverted to Palermo Airport on the other side of the island due to the hazardous conditions.

As residents work to clean up following the unprecedented deluge, better weather is in the forecast.

"As the storm system that brought the extreme rainfall moves southward and stalls across southern Italy through the end of the week, dry conditions are expected to prevail across the area," Douty explained. "There can be a gusty wind at times into the weekend, but it should not hinder cleanup and recovery efforts."

Imagine living in this place ... during winter