Unprecedented bouts of extreme heat and increased ice melting events have become the common topics of global warming worries. But in the South Pole, the opposite effects have been just as jarring in recent months.

Unlike its flashier cousin, the North Pole, which has been made famous for its mythical holiday residents, the South Pole hasn't been as directly exposed to the effects of a heating climate. While rising temperatures and melting ice shelves have caused some worry for climatologists, the South Pole has been largely spared from the effects seen at the North Pole, which has endured widespread glacial melting and was even shrouded in wildfire smoke this summer.

But in the vast tundra of Antarctic ice at the South Pole, temperatures plummeted to levels never seen before this past winter.

At the Amundsen–Scott South Pole Station, located on the highest plateau of Antarctica, average temperatures from April to September, the continent's winter months, fell all the way down to 78 degrees below zero Fahrenheit (61 degrees below zero Celsius).

The sun is returning seen illuminating the Atmospheric Research Observatory a few weeks before it finally peaks over the horizon. (Unsplash)

And that wasn't the lowest temperature of that range. That was the average.

According to data kept by the British Antarctic Survey, the 2021 winter's harsh temperatures were the lowest in more than 60 years. The research team, which is part of the Natural Environment Research Council, has been tracking temperature data in the South Pole since 1957 and had never recorded a winter this cold.

The lowest minimum temperature recording from Russia’s Vostok Station was an impressive 110.9 below zero F (79.4 below zero C) on Sept. 30. At that time, the AccuWeather RealFeel® Temperature was 122 below zero F.

According to the Washington Post, the harrowing season can be blamed on a persistent polar vortex that surrounded Antarctica for the entire winter. 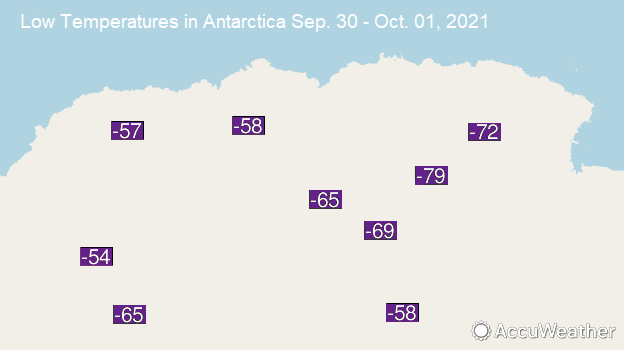 A map showing the lowest temperatures at selected Antarctic stations between Sept. 30 and Oct. 1, 2021, (in degrees Celsius)

That vortex was most intense in July and August, Nicholls said. Even after weakening some in September, it still remained overall fairly strong.

"Basically, the winds in the polar stratosphere have been stronger than normal, which is associated with shifting the jet stream toward the pole,” NOAA atmospheric scientist Amy Butler told The Post. “This keeps the cold air locked up over much of Antarctica.”

The comparison between the rest of the world’s spiking temperatures and Antarctica’s new depths of bitter cold is shocking, as climatologist Zack Labe depicted on Twitter.

All latitude bands, except for Antarctica, observed above average temperatures over the last three months.

Experts are urging people to read into Antarctica's winter temperatures with caution, however. One single season of extreme temperatures, whether hot or cold, shouldn't be used to analyze entire climate trends.

“One cold winter is interesting but doesn’t change the long-term trend, which is warming,” University of Washington Atmospheric Sciences Professor Eric Steig told The Post.

What's it like to live through a South Pole winter?

Before the 2020 winter, Christine Schultz of the Global Monitoring Division's (GMD) Atmospheric Research Observatory spoke to AccuWeather about what winter was like at the South Pole.

"It’s a mix of emotions as the sun sets [for the last time of the season]," Schultz told AccuWeather. "It’s exciting for the winter to actually start ... There’s also a little bit of trepidation too because it’s unknown: How are you going to react without the sun 24/7 for six months? What’s it going to be like working in extremely cold conditions that (you) really haven’t seen up to that point yet?" 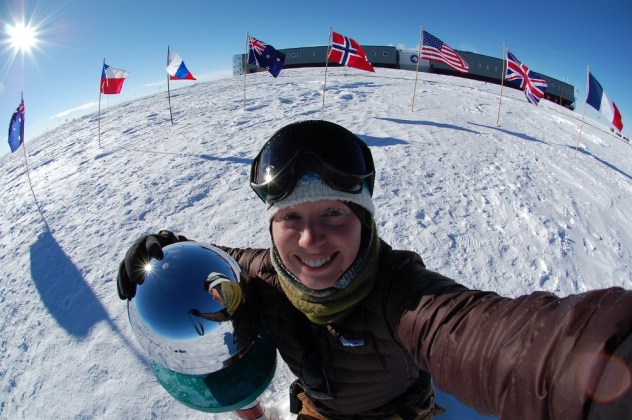 Schultz diverted from her path one day to take a selfie with the symbolic marker of the South Pole in Antarctica. (Christine Schultz)

She added that routine is more important than ever in those winter months, as an entire season without sunlight can make it easy to lose track of time and stay in your pajamas all day while sheltering from the frigid temperatures, which can dip more than 100 below zero F.

"People get pretty creative over the winter months when there's not a lot of outside stimulus," she said, adding that the group she worked with watched movies, learned how to knit and hit the gym.