In a country where it rains nearly 43% of the year, the weather has a significant impact on personal style. And Queen Elizabeth will always be remembered for one matching accessory whenever it rained.

As the world mourns Queen Elizabeth II's death, many people remember the monarch for her colorful wardrobe, which was known for including bright and vibrant coats and hats.

The queen's job entailed a non-stop schedule of public duties and engagements throughout her 70-year reign and even at the age of 96 during the last year of her life. She once joked, "I have to be seen to be believed," explaining that she could never wear the color beige as she might go unrecognized.

The queen was always careful to take the weather into consideration when planning her outfits and how she would accessorize for an official outing, ensuring that any weather-proofing measures did not obscure the people's view of her.

In a country where it rains, on average, 159 days of the year, according to the Met Office, Her Majesty was always prepared for the weather with a custom umbrella, which came from her epic collection, to match her outfit.

Royal watchers in recent years noticed the trend of her matching umbrella and found joy in the many colors she displayed. "To top it all, there is also an umbrella that matches," one social media user marveled while praising the queen's fashion sense. "She has the most curated wardrobe in the world and when she goes out, everything is perfect," another chimed in around the same time people began noticing the umbrella-wardrobe coordination.

The queen's colorful umbrellas were made by a London-based family-owned company named Fulton. The brand was granted a "Royal Warrant," or stamp of approval, from the queen in 2008. Previously, Fulton held a royal warrant with the Queen Mother, who was the mother of Queen Elizabeth II, and preferred the brand's umbrella.

In fact, Town and Country magazine reported that the Queen Mother in 1988 persuaded Fulton to bring the umbrella out of retirement after it had been discontinued some years earlier, expressly for her daughter. 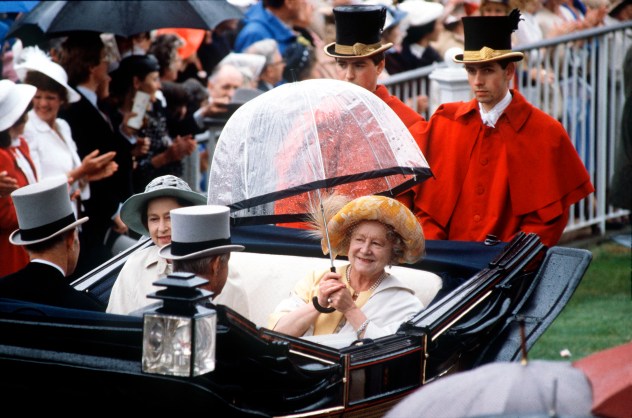 The Queen Mother Holding A Transparent Umbrella To Keep Off The Rain As She Arrives By Carriage With Her Daughter, Queen Elizabeth Il, For The Racing At Royal Ascot. Footmen, Dressed In Red Uniforms, Are Sitting Behind The Queen Mother On The Back Of The Carriage. (Photo by Tim Graham Photo Library via Getty Images)

Fulton's "Birdcage" umbrella, which retails for about $26, was the queen's accessory of choice for foul weather. Its transparent dome shape provided ample protection from the rain while still allowing the queen to see and, importantly, be seen by the masses.

According to Fulton, this specific umbrella type utilizes super-strength construction and high-specification components to withstand up to 78 mph of wind, Express, a London-based morning newspaper, reported earlier this year.

"For us, it's all about the quality and reliability. We can't have an umbrella that fails," Nigel Fulton, the CEO of Fulton Umbrellas, told Vanity Fair in a 2019 interview. "Our umbrellas are made of fiberglass, which make[s] them very resistant. The birdcage model rarely turns inside out because of the shape and the fiberglass flexibility, which gives it tremendous strength." 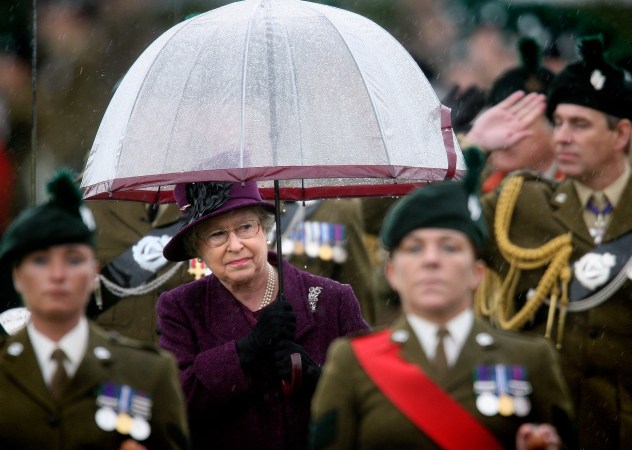 While the exact number of umbrellas the company provided the queen with is unknown, in 2019, Vanity Fair reported that the queen was believed to own "over 100 umbrellas."

Nigel told Hello! Magazine that the queen's assistant and senior dresser, Angela Kelly, approached him at the start of each season to custom design umbrellas specifically for the queen.

"The queen's senior dresser usually sends us swatches of material or color chips for us to match the colored birdcage umbrellas," Nigel told Hello! Magazine in an interview last year. "We then produce samples for their approval, and if no further changes are needed, we make up the finished umbrella." 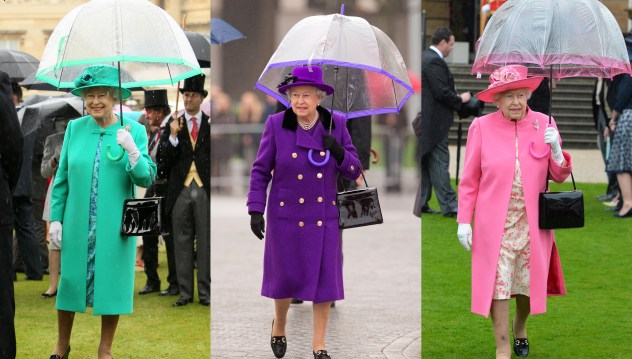 This combination of photos shows Britain’s Queen Elizabeth II under an umbrella while hosting a garden party in the gardens at Buckingham Palace on July 19, 2011, in London, left, while she is attending the opening of the newly developed Jubilee Gardens on October 25, 2012, in London, center, and under an umbrella at a garden party at Buckingham Palace in London, on May 10, 2016, right. (Dominic Lipinski, left, Indigo, center, John Stillwell, right/Getty Images)

While the transparent dome is consistent in each umbrella, the trim, handle, top and ferrule and the pointy bit at the umbrella's tip are all outfitted with the desired color.

The brand is also used by other Royals, such as William, the Prince of Wales, Kate Middleton, the Princess of Wales, Camilla, Queen Consort of the U.K., and Meghan Markle, the Duchess of Sussex. Fulton Umbrellas, in a post on Instagram, expressed condolences about Queen Elizabeth II's passing. "She was a truly inspirational woman," the post said, "and we are deeply honoured to have held Her Majesty's Royal Warrant."

The queen, who commonly advocated for climate actions, braved all kinds of weather conditions during her nearly 70-year reign, and several of her brushes with severe weather made global headlines. 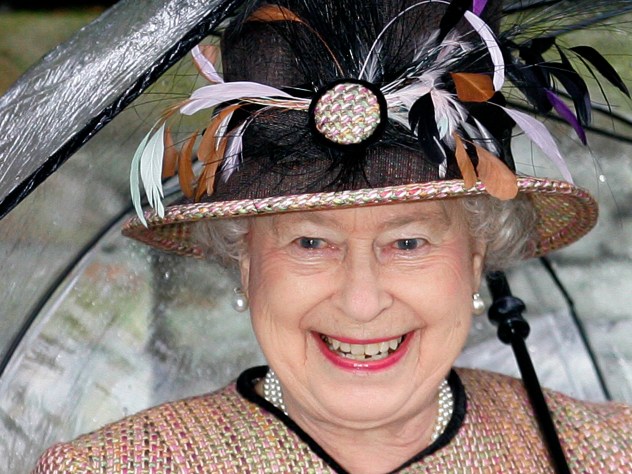 The most recent headline-making close call with the weather came in June when a violent lightning and hail storm prevented the Queen's private jet from landing. The jet circled the airport for about 15 minutes until it was deemed safe to make a second landing attempt. On the second attempt, the flight touched down without any problems, and the queen was driven back to Windsor Castle unharmed.

In 1996, lightning struck at a Buckingham Palace garden party, injuring two women. The queen and other royal family members were in the royal tea tent, just 50 yards behind where the lightning strike occurred.