Blistering heat waves, extreme drought and multiple 1-in-1,000 year floods. It was a summer of extremes, and it didn't let up. Eight U.S. states also notched their hottest August ever this year.

From extreme heat to multiple 1-in-1,000-year floods, there was no shortage of records that were broken this summer. So it may come as no surprise that this past meteorological summer, which spans June 1 to Aug. 31, was ranked the third-hottest summer across the contiguous United States.

In a report recently published by the National Oceanic and Atmospheric Administration (NOAA), the average temperature this past summer for the Lower 48 was 73.9 degrees Fahrenheit, which is 2.5 degrees F above average.

This year ranks right behind the summer of the Dust Bowl, 1936, and the scorching summer of 2021, both of which had an average temperature of 74.0 degrees F, which is 2.6 F above normal.

Ferrell noted that Orovada, Nevada, had the most significant temperature departure from normal as the average temperature climbed 4.5 degrees F above normal.

The month of August was one for the record books, too, coming in as the eighth-warmest August since record-keeping began 128 years ago. The average temperature of the contiguous U.S. in August was 74.6 degrees F, which is 2.5 degrees above average, according to NOAA. 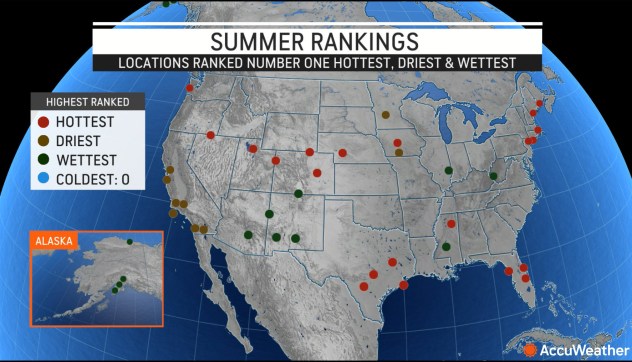 "Perhaps even more notable was the fact that no cities in the U.S. experienced below-normal temperatures when averaged over the summer," Ferrell added.

But it wasn't just temperature records that were broken. Record flooding events and extreme drought made the headlines frequently throughout the summer.

This summer, an ongoing drought tightened its grip across the Southwest, drying up lakes, rivers and reservoirs. According to U.S. Drought Monitor, a severe-to-extreme drought still covers all of California, Nevada, Utah and New Mexico as of mid-September. The Drought Monitor states that an estimated population in California drought areas tops 37 million residents, with over 16 percent of the state under exceptional drought conditions. 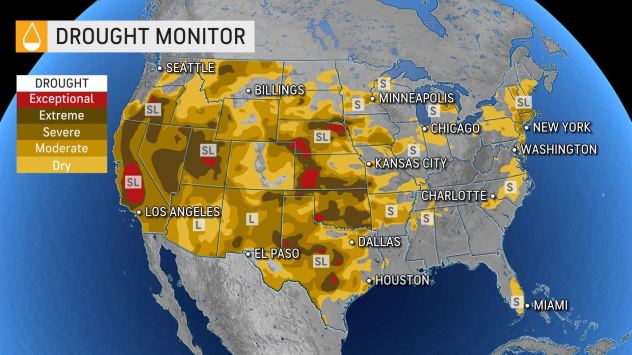 In late August, officials in Southern California took unprecedented measures by restricting water usage to 6 million residents in an effort to adapt to the unrelenting drought. Officials in the neighboring state of Nevada watched water levels on Lake Mead drop to historic levels amid scorching temperatures and dry weather. Multiple bodies turned up as the shorelines on Lake Mead continued to recede.

On the opposite side of the country, flooding left towns and cities devastated.

By the end of meteorological summer, the average precipitation for the Lower 48 measured up to 3.04 inches, which is almost half of an inch above normal.

"Fourteen stations, mostly in California, recorded or tied their driest summer on record -- many with no rain at all," Ferrell said.

There were plenty of cities that endured the opposite extreme, with 12 cities measuring their wettest summer on record. Jackson, Mississippi, topped the list after a total of 22.9 inches had fallen at the Jackson Hawkins Field Airport, which is 10.89 inches more than normal during the period from June 1 to Aug. 31. In August, floodwaters breached the city's main water treatment plant, forcing running water to be shut off to more than 180,000 residents.

According to NOAA, Mississippi recorded its wettest August ever.

Despite ongoing drought conditions across much of the West, five cities in the Southwest had their wettest summers in recorded history.