A week after catastrophic flooding struck Kentucky, killing 37 and leaving many without power or running water, residents are facing added challenges while trying to pick up the pieces.

Recovery has only just begun in eastern Kentucky after deadly flooding. Kim Leoffler talked with residents picking up the pieces.

A week after historic flooding devastated eastern Kentucky, claiming the lives of at least 37 people, high temperatures and humidity will bring a new set of challenges to residents who are still picking up the pieces.

On Thursday, temperatures across eastern Kentucky reached the upper 80s F, including Lexington, Kentucky, which reached 87 degrees on Thursday. Nearby Louisville, Kentucky, recorded a high of 90 degrees.

Wednesday provided the first wave of heat in the region. In Jackson, temperatures were in the upper 80s throughout the day, eventually peaking at 89 F during the early evening hours. High temperatures in Prestonburg peaked even higher, remaining at 90 F for several hours Wednesday afternoon.

Multiple counties across the eastern part of Bluegrass State were under a heat advisory through Thursday evening.

This extreme heat posed a challenge for residents who still didn't have power and reliable drinking water.

“It is so miserable. The humidity is so high, it takes your breath,” Kentucky resident Kirsten Gomez told the Associated Press on Tuesday. “Your clothes stick to you. Your hair sticks to you. This mud is caked on you. ... But I’m just blessed that we don’t have rain anymore.”

As of Friday morning, almost 3,000 customers were without power across Kentucky, with most of the outages coming from eastern Kentucky, according to PowerOutage.US. And water outages were still ongoing.

Without power or reliable drinking water, the high temperatures will threaten to cause heat-related illnesses.

Kentucky Gov. Andy Beshear announced on Tuesday that eight cooling centers will open in eastern Kentucky. "Don't be too proud to go to one of these places. It's going to be really hot and really dangerous," the governor said in a press conference.

Even while enduring added hardships from the stifling weather, community members are still coming together to get through this challenging time.

In Whitesburg, Kentucky, which is near the Kentucky-Virginia border, AccuWeather National Reporter Kim Leoffler spoke with residents who are starting the clean-up process.

"I’ve never seen nothing like this,” Kentucky resident Larry Brown told Leoffler. “I’ve seen it on TV, but never around here. This is the worst we’ve ever had.” 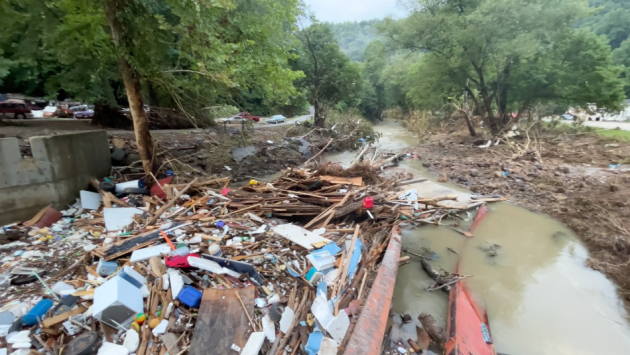 Photos and videos from eastern Kentucky show streets and creeks lined with belongings and debris. Residents are taking it day by day, sifting through what was left behind and salvaging whatever they can.

"You just wonder how someone can rebuild from something like that," Sean Osborne, a contractor who was assessing damage to homes in Whitesburg on Monday, told The New York Times.

Osborne explained to the Times the extent of the damage he saw goes to show how challenging the road to recovery is going to be for the people of this area.

What are the different types of flooding?
The power of floodwater 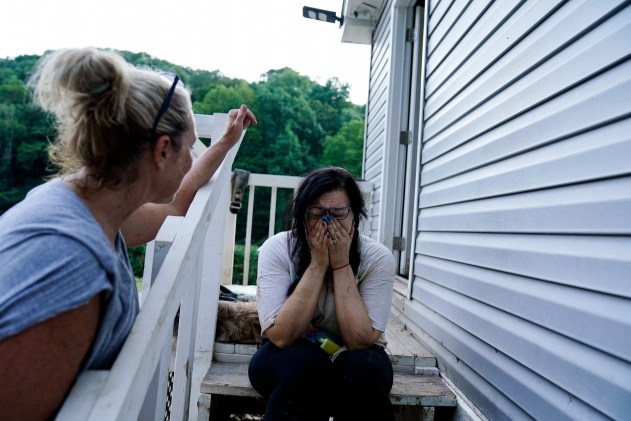 Kirsten Gomez, right, cries to her family member Kathy Hall, left, after what she calls a quiet moment to reflect on what her family has gone through in the aftermath of massive flooding, Tuesday, Aug. 2, 2022, in Hindman, Ky. (AP Photo/Brynn Anderson)

The University of Kentucky men's basketball team came together and organized a player-driven event to raise money for the Kentucky Flood Relief. By the end of the night on Tuesday, the team had raised nearly $3 million for the relief fund.

As search and rescue operations are still ongoing, U.S. Senator for Kentucky Rand Paul gave a shout-out to the Kentucky National Gaurd on Tuesday, thanking them for their hard work.

"The heroism of the [Kentucky National Guard] has been nothing less than astonishing," Paul wrote. "I'm grateful for their work and the work of countless other agencies currently working to save lives in eastern Kentucky."

After describing the flooding as one of the "most devastating and deadly" floods Beshear has ever experienced in his life during a press conference on Tuesday morning, he took to Twitter commending the people of eastern Kentucky for sticking together in this challenging time.

"Despite the devastation -- despite the loss -- the people of Floyd County and all of Eastern Kentucky remain strong," Beshear wrote on Twitter. "Everywhere you look, you can see neighbors helping neighbors. It's really something special."