What's up in the sky for 2019? Eclipses, meteor showers and a rare celestial alignment. We have it all as we give you the top astronomy events of the new year.

The first meteor shower of the new year will peak later this week as the Quadrantids dart through the January night sky.

The peak of the shower will unfold from the night of Jan. 3 into the early morning hours of Jan. 4. One of the benefits for stargazers is that the peak occurs during the new moon, allowing for a darker sky. Those in the Northern Hemisphere, especially in Europe, could wind up seeing the most meteors.

"Anyplace at mid-northern and far-northern latitudes might be in a decent position to watch the Quadrantids in 2019, especially as there is no moonlight to ruin this year’s show," EarthSky states. 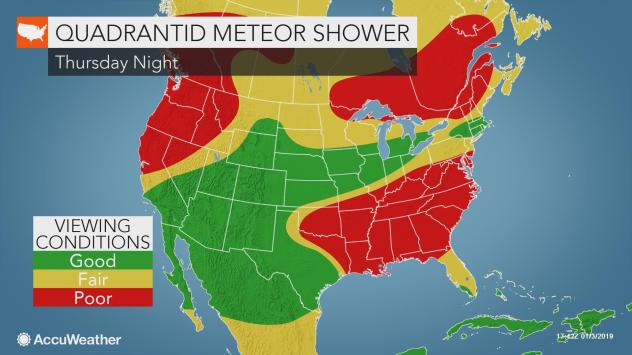 "The lower natural light pollution will make it easier to see more meteors, but light pollution from cities and highways can still interfere with viewing," AccuWeather Meteorologist Brian Lada said.

During perfect conditions, anywhere from 60 to over 100 meteors per hour can be seen during the peak.

The most ideal viewing conditions will appear across parts of the central and southwestern United States. Clouds and unsettled weather may limit viewing in the Northwest while a large storm disrupts skygazers' opportunities in much of the Southeast.

The timing of the peak is very narrow, according to Earthsky. Unlike other meteor showers, such as the Perseids or Geminids where the peak can last for a couple days, the Quadrantids peak is only for several hours, with the best time occurring between midnight and dawn.

Because this peak is so brief, some parts of the world may not be able to see the shower.

According to NASA, the reason the peak is so short is due to the "shower's thin stream of particles and the fact that the Earth crosses the stream at a perpendicular angle."