The winter weather was quite a shock for residents as snow moved through Orchard Park, New York, just south of Buffalo, on May 8.

The popular saying "April showers bring May flowers" might not be the case this year. The northeastern United States experienced an unusual Mother's Day weekend as most restaurants remained closed amid coronavirus concerns and a historic polar vortex packing snow shattered temperature records.

Freeze watches and warnings along with frost advisories were put into effect Friday night for many places across parts of the Midwest, down into the Southeast and into the Northeast. Cities like Atlanta ended up being colder than parts of Alaska on Saturday morning.

Just a 30-second clip of the snow falling this morning — MAY 9th — along the covered bridge over the Ammonoosuc River in Littleton #NH #snowinmay ❄️ pic.twitter.com/64nCnC71Bx

Adding to the wintry feeling this weekend, snow swept through much of the Northeast Friday afternoon through Saturday night.

Snowfall totals exceeded a foot in portions of New England, with 15 inches reported in Orient, Maine. Widespread snow totals of 3-6 inches were recorded elsewhere across the region.

Snowflakes were even observed at Central Park in New York City early on Saturday morning, which tied the record for the latest snow ever at that observing station.

All 6 of our climate sites (EWR, NYC, BDR, LGA, JFK, ISP) reported a T of snow early this morning. Officially, the month of May has the exact same amount of snow as the month of February for 5 of these sites.

Islip, NY has officially had a snowier May than February. #aMAYzing

While areas farther south in the Northeast didn't experience snow, they did get a taste of record cold.

Washington, D.C., tied its low maximum temperature record for May 9 of 52 F, a mark which has stood since 1877.

Low temperatures dipped into the 20s and 30s across the region, with dozens of sites setting new record lows over the weekend. 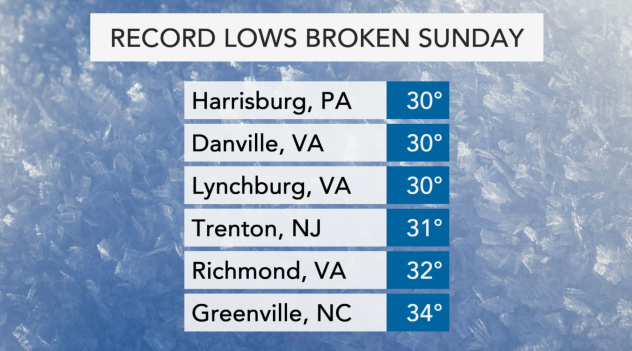 The low temperatures shown on this graphic are just a handful of the new records that were set amid the Mother's Day weekend chill.

Several record lows were broken on Saturday morning, including in Pittsburgh, Detroit, and Central Park in New York City, where temperatures dipped into the upper 20s and lower 30s.

Saturday morning, May 9, was Nashville, Tennessee’s, coldest morning this late in the year since records started being kept in 1871.

While chill will linger early in the week across the Northeast, AccuWeather meteorologists say that spring warmth will finally return later this week.