Scientists observing the erupting volcano on the Spanish island of La Palma captured video of one of the most sensational images to be captured on camera yet.

It’s a rare and dangerous phenomenon being seen out of Spain's La Palma volcano.

Geochemist Harri Geiger was on the Spanish island of La Palma in the final days of October witnessing the power of the Cumbre Vieja volcano. The volcano was erupting at what appeared to be a safe distance, but as Geiger and others watched, a piece of the volcano came racing down the mountainside, slowing to a stop just yards away from his feet.

This wasn’t just any rock, it was a molten lava bomb.

Geiger's video showed the lava bomb tumbling down the side of the mountain, glowing orange as it gathered volcanic dust.

At a glance, the outside looks like a normal rock found in the vicinity of a volcano, but after closer inspection, the rocks are alive on the inside with partially molten lava. 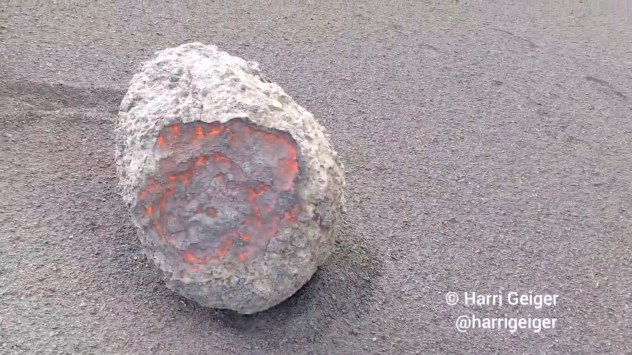 A 'lava bomb' that has rolled down a hill is seen as the Cumbre Vieja volcano continues to erupt, on the Canary Island of La Palma, Spain, October 27, 2021 in this still image form a social media video. Video recorded October 27, 2021. Harri Geiger/via REUTERS

Lava bombs do not occur with every volcano. According to the USGS, these dangerous projectiles only occur during an explosive eruption, like the ongoing eruption in the Canary Islands, which began in late September.

Additionally, to be considered a bomb, the fragment must be at least 2.5 inches across.

The lava bomb captured on camera by Geiger was much bigger than that, measuring 3.2 feet across with an estimated weight of half a ton. It was also careening down the mountainside at speeds in excess of 35 mph, Geiger said.

Once the chunk of debris came to a rest, Geiger and others approached it for a closer look.

Over the last month, the Cumbre Vieja volcano has been causing quite a disruption on the island of La Palma, forcing thousands to evacuate, closing the La Palma airport and leading to the destruction of numerous properties. It has also drawn global interest and drone operators have been capturing footage of the volcano's impacts, including dramatic video of the moment a lava flow collided with a swimming pool.

Meteorologists have also paid close attention to the Cumbre Vieja volcano for the impacts it has had on the weather. In October, satellites captured a rare phenomenon known as gravity waves, which were triggered by the volcanic eruption. The lava bombs are the latest in a series of jaw-dropping images that have resulted from the eruption.

As a man in Hawaii found out a few years ago, anyone in the vicinity of a volcano should be on alert for lava bombs as they can endanger lives and property.

In 2018, Darryl Clinton was protecting homes from the Kilauea eruption on Hawaii's Big Island, using garden hoses and fire extinguishers to stop the lava bombs from igniting houses. Clinton turned his attention away for just a few moments before he was struck in the leg by a lava bomb.

“‘That didn’t just happen’ was my first thought,” Clinton told CNN at the time. “I knew it was real because of the pain. Then I got caught on fire, fell on the floor, grabbed my foot and leg and held ‘em together.”

Clinton was rushed to a nearby hospital where he was able to be treated for his injury.

The volcano in the Canary Islands is not the only one in the world that is currently erupting.

Around 2,500 miles to the north, scientists and travelers have been flocking to see the Fagradalsfjall volcano, the first volcanic eruption in far southwestern Iceland in nearly 1,000 years.

One group of researchers in Iceland took advantage of the sizzling volcanic rocks to cook hot dogs while out in the field, saving the scientists a trip back to town or the hassle of lugging a grill out in the volcanic landscape.