In case you missed it: Last week of summer features a major hurricane, deadly tropical storm and a taste of winter

Multiple residents of Houston, Texas, had to be evacuated from their homes on Sept. 19 after a devastating amount of rainfall coming from Imelda flooded the city.

The Atlantic basin remained active just following last week's peak of the 2019 hurricane season. Humberto followed along Dorian's heels to become the year's second major hurricane. Meanwhile, Northeast residents bundled up as the season change appeared to skip the fall equinox and head straight into winter. And in the South, massive flooding plagued Texans as deadly Imelda drenched communities. Here's a look back at the week that was.

In southeastern Texas and southwestern Louisiana, Imelda took a deadly turn as it dumped over 40 inches of rain onto several communities. It became a tropical storm on Tuesday near Texas, then dropped disastrous downpours over parts of Texas as a depression and eventually a tropical rainstorm.

At least two people in Texas have drowned in the flooding nightmare, which has conjured up traumatizing flashbacks to Hurricane Harvey’s unprecedented deluge in 2017. 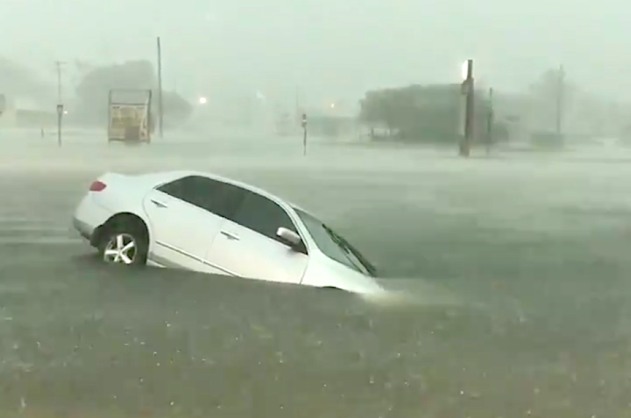 Hundreds of people have had to be rescued from the floodwaters across the region. Beaumont, Texas, which lies east of Houston, has so far seen the worst of the flooding.

“The State of Texas is working closely with local officials and emergency personnel to provide the resources they need to keep Texans safe from Tropical Storm Imelda,” said Texas Gov. Gregg Abbott, who declared a state of disaster for 13 impacted counties as well as a state of emergency.

Some communities were left inundated with astonishing amounts of rainfall by the time rain tapered off Thursday evening. The highest rainfall total as of now has been 43.35 inches at Taylor’s Bayou in Port Arthur, Texas.

Jerry strengthened to hurricane status on Thursday, becoming the fourth hurricane of the 2019 Atlantic season. AccuWeather meteorologists expect this year’s 10th named storm to continue to strengthen and impact the Leeward Islands, with Jerry’s eye anticipated to pass just north of the islands.

As of Friday afternoon, Jerry had maximum sustained winds of 85 mph with a west-northwestward motion at 17 mph toward islands including Anguilla, the United States Virgin Islands and Guadeloupe.

"We are still concerned that Jerry may take a slightly more westerly track for a time," AccuWeather Hurricane Expert Dan Kottlowski said. "If that happens, Jerry could pass very close to the Leeward Islands, and dangerous and damaging conditions could unfold."

Jerry’s strength could rapidly ramp up in the coming days, putting parts of the Leeward Islands on alert for the possibility of tropical storm conditions and potentially up to 6 inches of rain in some places.

Although people in Bermuda avoided a direct hit from powerful Humberto, which became the season’s second major hurricane, the island still felt its strong winds, rough seas and rainfall as it brushed by late Wednesday. 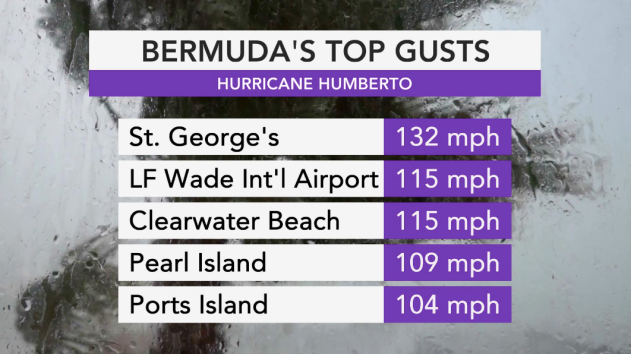 Humberto became a Category 3 hurricane Tuesday evening, and as it tracked close to Bermuda, its track carried it just north of the islands Wednesday, giving the island a taste of its hurricane-force winds. By Thursday afternoon, Humberto had weakened to Category 2 strength.

The top wind gust in Bermuda from Humberto on Wednesday night was 132 mph at St. George's. The last major hurricane to lash Bermuda was 2016’s Nicole.

Fall begins in the Northern Hemisphere on Monday, but from some of the snowy conditions already popping up in some locations, it looks like winter’s just a little bit ahead of schedule.

Humberto batters Bermuda with hurricane-force winds, pounding seas
It may still be summer, but the Northeast just saw its first signs of winter
How extreme weather led to one of the 20th century’s most iconic photos
Imelda’s devastating rains overwhelm southeastern Texas, cause record-setting flooding

Sunday night was a frigid one on the mountain, with temperatures bottoming out at 31 degrees Fahrenheit at the time of the ice’s accumulation on the summit. Monday’s conditions, despite the ice buildup, weren’t the summit’s coldest for this month.

“We have had a few good cold snaps recently with temperatures falling below freezing, though it has so far only occurred when we have dry air in the region, so no snow yet,” Mount Washington Observers' website read.

In other parts of New England, including Maine, Vermont and New Hampshire, residents have been bundling up as chilly conditions persist.

The National Weather Service (NWS) issued freeze warnings and frost advisories, with forecasters expecting that the temperatures Thursday night from the upper 20s to 30s F would result in areas of frost, according to the Associated Press.

Some good news, however: it looks like this cooldown was brief, as summerlike weather is expected through the last weekend of summer 2019.

Ian rated a 3 on RealImpact Scale, 4 for northwest Caribbean