Showers, thunderstorms from Jerry to graze Leeward Islands into Saturday

Jerry continued its journey to the west on Friday as it neared the Leeward Islands. Jerry, which became a hurricane Thursday, is the 10th named storm and the fourth recognized hurricane of 2019 Atlantic season. Jerry weakened to a tropical storm early Saturday morning.

The center of the storm is passing just to the north of the Leeward Islands. As of early Saturday morning, the storm was located about 260 miles to the north-northwest of Anguilla.

Jerry is no longer expected to strengthen as it did on Tuesday and Wednesday, due to increasing wind shear. Most likely, at least through most of this weekend, Jerry has already peaked in intensity. Jerry spent time as a Category 2 hurricane during Thursday night to Friday morning.

However, the storm’s proximity and intensity prompted parts of the Leeward Islands to issue tropical storm watches, with tropical storm conditions possible into this weekend. 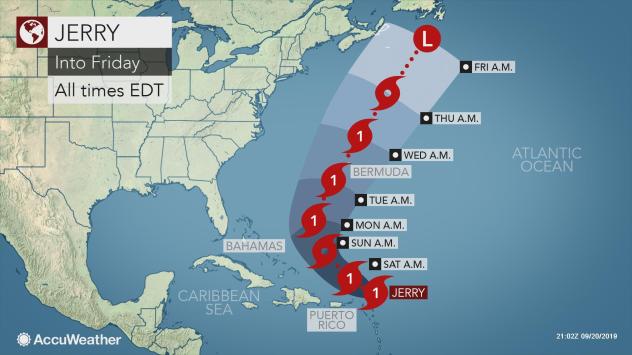 According to the National Hurricane Center (NHC), the hurricane was packing maximum sustained winds of 65 mph early Saturday morning and was moving west-northwest at 16 mph.

"Outer rain bands from Jerry will brush over the northern Leewards, which includes the British and United States Virgin Islands, and Puerto Rico into Saturday," according to AccuWeather Hurricane Expert Dan Kottlowski.

"Winds could gust to near or just over tropical storm force, especially over the higher terrain of these islands. Rain could be briefly heavy bringing a general 1-2 inches," Kottlowski said.

"However, if a heavier rain band sets up over these islands for a few hours, there could be a locally heavier rainfall amount close to 6 inches. This could cause flash flooding and higher terrain mudslides, he added. 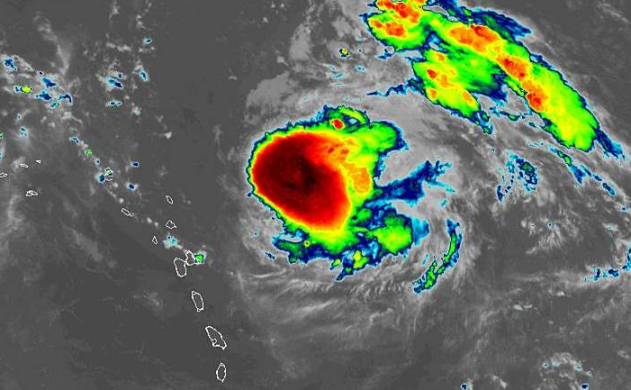 Jerry swirls a few hundred miles east of the Leeward Islands early Friday morning. Thunderstorms were not situated over the center of the storm. (GOES-EAST/NOAA)

While the projected track of Jerry later in the weekend and next week is one that takes the system over the open waters of the western Atlantic, well to the east of the United States, its progress will have to be monitored. Some indirect impacts on the U.S. are anticipated.

Bermuda could face direct impacts from a possible close encounter with Jerry by the middle of next week, AccuWeather forecasters say.