AccuWeather's Jonathan Petramala reports from Houston, Texas, where nine barges broke away from a shipyard Friday morning. At least two slammed into the I-10 San Jacinto River Bridge near Channelview, Texas. Both sides of I-10 East were forced to shut down.

Roads and several communities were still submerged in 2-3 feet of water in southeastern Texas Friday after days of heavy rainfall from Tropical Rainstorm Imelda. Imelda, which came ashore as a tropical storm Tuesday, spawned rising floodwaters that turned deadly and left a bridge potentially damaged after runaway barges collided with it.

The slow-moving tropical system's torrential rain caused a devastating scene Wednesday into Thursday that was reminiscent of Hurricane Harvey's deluge just two years ago. The flooding prompted hundreds of water rescues as well as more than 1,000 calls for assistance. 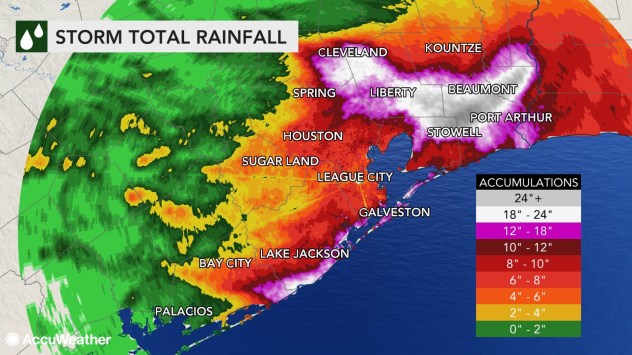 The latest rainfall reports from Imelda as of 9 a.m. CDT Friday, Sept. 20.

Authorities said at least five deaths can be blamed on the widespread flooding. The first happened in Jefferson County when a person drowned while trying to move a horse to safety. Three of the deaths occurred in vehicles caught up in floodwaters. A man found in a ditch outside of Houston on Friday reportedly drowned.

Officials closed a stretch of Interstate 10 east of Houston on Friday to inspect it for structural damage after several barges slammed into a bridge along the swollen San Jacinto River.

Aerial footage captured by AccuWeather National Reporter Jonathan Petramala showed one of the barges jammed underneath the empty interstate.

The Coast Guard said that vessel movement under the I-10 bridge was suspended Thursday evening due to strong currents. The suspension remained in effect into Friday. 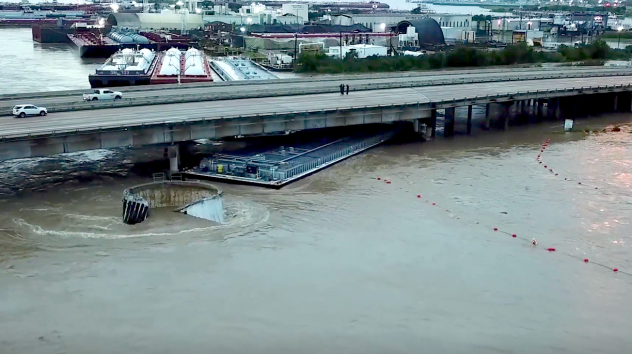 Gonzalez also said that one of his deputies had been swept away in floodwaters while responding to a citizen in need of rescue in Huffman, Texas, which is located near the outer reaches of Lake Houston.

While the sheriff's office lost contact with the deputy for a time, the deputy and citizen, who weren't identified, were eventually both located and were said to be in good condition.

Gonzalez said it was a multi-agency response involving the Coast Guard as well as the Houston Police Department.

Houston officials said that more than 1,600 vehicles had been towed from city streets as of 10 a.m. Friday. Additional tows of abandoned vehicles in parking lots, medians and roadways were ongoing.

The highest rainfall report came in from around the Beaumont-Port Arthur areas. An observation site near Taylor's Bayou near Hamshire reported 43.39 inches inches of rain. Hamshire is about 65 miles east of Houston. Several other areas topped the 40-inch mark, including Mayhaw Bayou (42.64 inches) and Taylor's Bayou (41.57 inches). 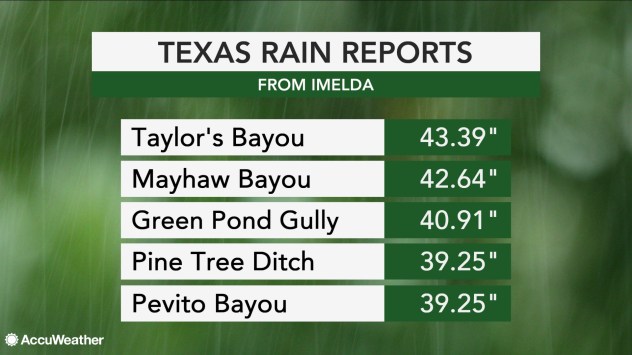 The torrents of rain that Imelda unleashed set numerous records, and the storm also became the seventh-wettest tropical cyclone in U.S. history. 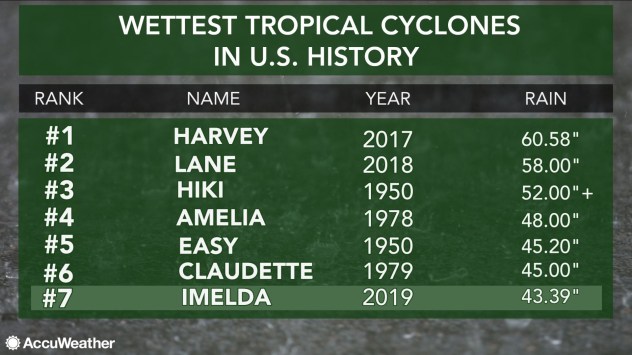 For Houston, Thursday was the wettest calendar day ever recorded in the month of September and the fifth-wettest day ever recorded. Houston's Hobby Airport set daily records on Tuesday and Wednesday and the monthly total is now 11.37 inches, good for the third-wettest September on record for that site.

On Thursday afternoon, a very heavy rain band east of Houston continued to drop copious rainfall amounts of 3 to 4 inches per hour, adding to the significant and even major flooding that is ongoing, forecasters said.

One Texas couple spent seven hours inside their vehicle, trapped in floodwaters as they waited to be rescued. Tina and Robert Horne had gone out to make a grocery run and suddenly found themselves overwhelmed by Imelda's surging floodwaters in Splendora, about a 40-mile drive north of Houston.

"I hit that water and poof, that was it," Robert told KTRK's Ted Oberg. "My car was floating." Firefighters used a zodiac boat to reach the couple in water that was nearly chest deep, according to Robert, and then usher them to dry land.

Tina said she clung to her husband to prevent being swept away by the current from the rushing floodwaters. The Hornes were weary after the ordeal, but glad to be safe -- two of hundreds who need rescuing from stranded vehicles.

"The State of Texas is working closely with local officials and emergency personnel to provide the resources they need to keep Texans safe from Tropical Storm Imelda,” Abbott said in a statement. “I thank our first responders who are acting swiftly to help the communities that are facing this severe weather event. I urge all those in the path of this storm to take the necessary precautions and heed all warnings from local officials.”

In Vidor and Winnie, officials interviewed by separate media outlets both spoke of the dangerous waters and the severity being worse than Harvey in 2017.

Vidor, Texas, Police Chief Rod Carroll told KFDM News that the situation in town was "catastrophic" and the flooding in town was worse than Harvey.

Videos on social media Thursday morning showed numerous water rescues being carried out by airboats, including some by the Texas Game Warden.

Farther south, Chambers County Emergency Management stated early Thursday morning that significant flooding was occurring in Winnie, with water coming into homes and businesses. Riceland Hospital was evacuated, and a flood shelter had been opened at White’s Park Community Center.

The Chambers County Sheriff's Office said the community of Winnie was "devastated" by rising water and high water rescue vehicles and airboats had been deployed.

In an interview with ABC News, Chambers County Sheriff Brian Hawthorne said the flooding in Winnie was "absolutely horrible" and homes and businesses that never got water during Hurricane Harvey in 2017 have been overwhelmed by flooding.

Elsewhere in Beaumont, the dual ABC/NBC affiliate,12 News, was forced to evacuate Thursday morning due to the rising floodwaters. The station said on its Facebook page that news anchors would broadcast from their sister station KHOU 11 out of Houston.

Imelda could be responsible for a few tornadoes that spun up in Chambers and Harris counties on Wednesday. Beaumont was under a tornado warning for a time early Thursday morning, but there were no initial reports of a confirmed tornado.