The central Washington pileup forced a closure of Interstate 90 for up to 12 hours, while freezing conditions caused accidents across the state.

At least 30 vehicles were involved in a pileup amid foggy conditions on Interstate 90 in central Washington on Wednesday, Dec. 7, according to officials.

Three people in central Washington were sent to local hospitals Wednesday morning after multiple collisions involving at least 30 vehicles near the town of Kittitas. According to the Washington State Patrol, at least 12 semi-trucks and 18 other vehicles were involved in the pileup that took place in frigid, foggy conditions.

The collision took place around 5:30 a.m. PST on Interstate 90 outside of Kittitas and nearby Ellensburg. The injuries of the three sent to hospitals, including one semi-truck driver, were not considered to be life-threatening. Among the other vehicles involved was an ambulance, photos from the scene show. 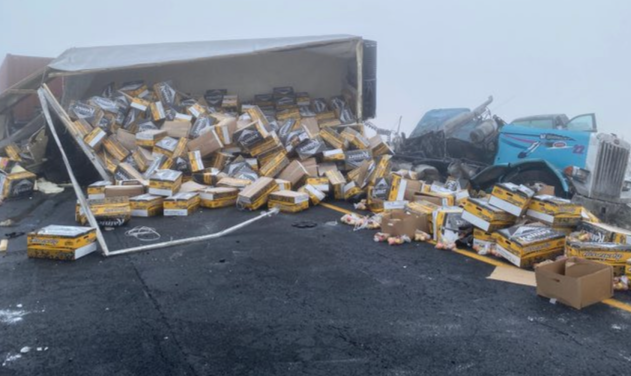 A load of goods was spilled onto Interstate 90 East in central Washington Wednesday morning after a pileup involving at least 30 vehicles. (Photo via Washington State Patrol)

A state patrol trooper stated Wednesday that freezing fog was a main contributor to the collisions. At Ellensburg Bowers Field, an airport about 6 miles northwest of the accident site, a weather station reported the temperature at the time of the crash was 22 F. The airport's official weather station reported clear skies; however, the station is around 100 feet higher in elevation than the airport, meaning the station was likely above the fog bank that factored into the pileup.

Freezing fog was also noted as a factor in several eastern Washington crashes Wednesday morning, according to state patrol in the city of Kennewick, which is about 100 miles southeast of Kittitas.

Freezing fog is defined as fog that forms when the temperature at the surface is at or below the freezing mark of 32 degrees Fahrenheit. On top of the reduced visibility hazard, freezing fog can bring additional danger for travelers, AccuWeather Meteorologist Ryan Adamson stated. 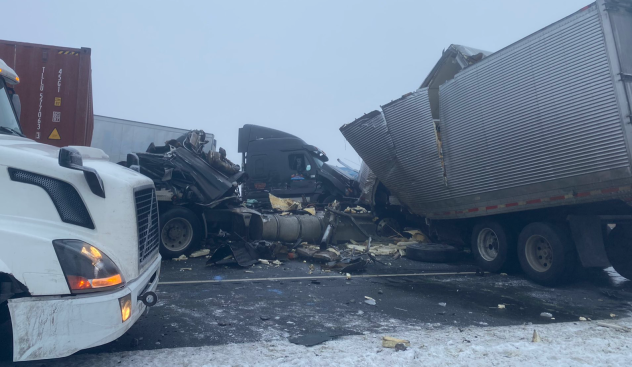 “When freezing fog forms, any moisture deposited by the fog onto roadways can also freeze,” Adamson said. “This can cause icy spots, especially on bridges and overpasses, so motorists need to exercise extra caution when there is fog with temperatures below freezing.”

Transportation officials announced that I-90 East is estimated to reopen around 4 p.m. PST after the closure due to the incident near Kittitas. Traffic was being diverted from the Kittitas exit of I-90 onto local roads. Cleanup of the collision will require tow trucks and other units, which headed to the scene shortly after the accident. One truck spilled a load of apples onto the interstate, troopers noted.