At least eight of the victims were children after heavy rainfalls and mudslides deluged parts of Colombia, including the bus and two other vehicles on a stretch of road in Risaralda.

Rescue workers search for survivors after a devastating landslide caused at least 27 fatalities in Pueblo Rico, Colombia, on Dec. 5. The country is experiencing the worst rainy season in 40 years.

A busload of passengers traveling from southern Colombia to the northwest corner of the country became buried within seconds under an enormous landslide that left at least 34 people dead Sunday morning.

The BBC reported that the bus, which was among several vehicles and their occupants that ended up trapped under the avalanche of mud, trees and rocks in the province of Risaralda, had two drivers and 25 passengers on board when it set off. Other reports, however, said there were about 30 or more passengers aboard.

Reuters reported on Monday that the number of children killed had increased to eight.

The bus left from Cali, a city in southwestern Colombia, and traveled about 168 miles to Quibdó in the northwest, according to Univision. An accident farther ahead caused the bus to stop in Pueblo Rico’s jurisdiction just as the landslide came down the hill and collapsed on top of the three vehicles.

The Associated Press reported a car with six passengers and a motorcycle with two people were also buried under the landslide, but at least nine people survived.

More than 70 rescuers spent about 24 hours searching for survivors before the search was called off Monday afternoon, according to the AP. 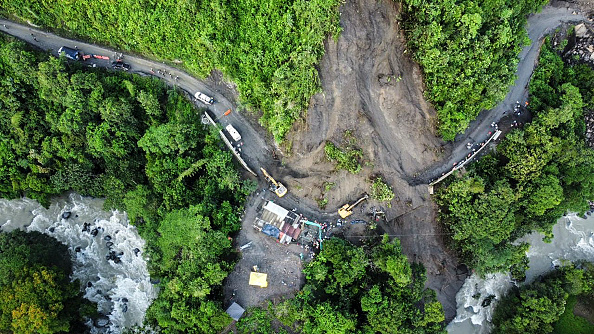 Aerial view of a landslide of a mountain in the sector El Ruso, Pueblo Rico municipality, in northwestern Bogota, Colombia, taken on Dec. 5, 2022. (Photo by AFP via Getty Images)

Guillermo Ibargüen was identified as one of the bus passengers who died. "Dad helped me get out of the bus through a little hole and I had to throw myself into the ravine," his son, Andrés, told Caracol News on Sunday. Ibargüen’s wife and daughter also survived.

Colombia has been in a “national disaster” state since early August after facing the worst rainfall season in the last 40 years, Univision reported. Colombia's national emergency management agency said the town had been under a mudslide threat triggered by the intense rains, according to the AP.

The heavy rains have been associated with La Niña, a climatological phenomenon that occurs when sea-surface temperatures in the central and eastern Pacific Ocean drop to lower-than-average levels for an extended amount of time. Government statistics show heavy rains this year have killed more than 216 people and left 538,000 homeless, according to Reuters.

Colombian President Gustavo Petro described the event as a tragedy, according to Reuters.

“Solidarity with the victims' families, they'll have the complete support of the national government," Petro said on Twitter. 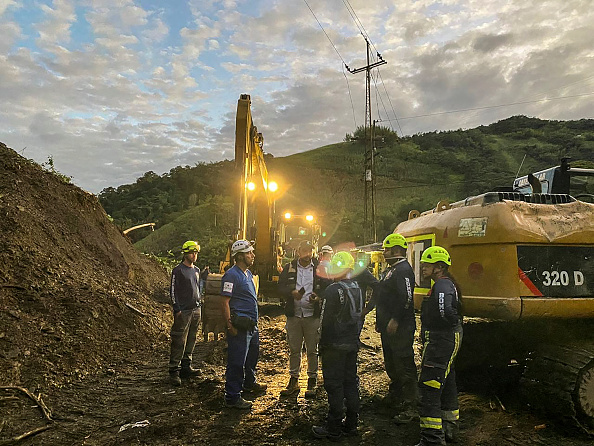 Rescue teams organize the search for people at a landslide of a mountain in the sector El Ruso, Pueblo Rico municipality, in northwestern Bogota, Colombia, on Dec. 5, 2022. (AFP via Getty Images)