It was business as usual in the bustling steel town just before Halloween 1948, but an extremely dangerous weather event was settling in — one that would force first responders to make difficult decisions and eventually pave the way to a cleaner future.

The modern “clean air” movement in the United States can be traced back to one small mill town in western Pennsylvania. In one brutal week in 1948, Donora's roughly 14,000 residents went about their daily lives while being subjected to one of the worst public health and environmental disasters in United States history.

Before the horrendous incident, the borough of Donora, about an hour south of Pittsburgh, was proud of its industrialization. And like its sister steel city, the community was reliant on industrial plants for its livelihood. Donora residents worked primarily for the local American Steel and Wire plant, or the Donora Zinc Works, both of which contributed to heavy pollution. The Zinc Works plant, in particular, emitted several harmful pollutants, such as hydrogen fluoride, carbon monoxide and nitrogen dioxide.

Donora was a bustling town in the 1940s, Donora Historical Society volunteer Mark Pawlewec told AccuWeather. Many people living in the town and working at the mill had immigrated to the area for various reasons. "They lived through World War I, the Great Depression, World War II," Pawlewec said. "Donora was a self-contained town … everything was here." 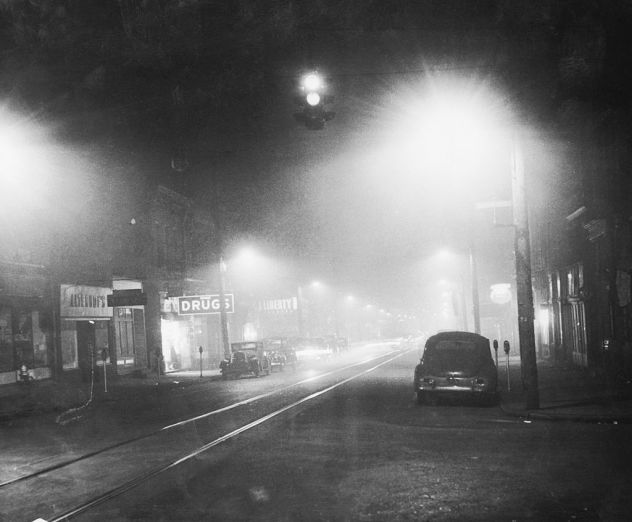 The Donora Smog of 1948 began on Oct. 27 and lasted until Oct. 31, when rain cleared the combined smoke, fog and pollution that had become trapped over the town. In those four days, 800 animals died, 7,000 people were sickened and 20 people were killed mostly by asthma-related ailments, all caused by the trapped air pollution. (Getty Images)

The local reaction to the polluted environment at the time was often indifference, as smoke in the air was seen as a sign of economic prosperity.

That attitude, however, changed in October of 1948 when a weather phenomenon called a temperature inversion occurred in the area, producing a choking smog.

On Oct. 26, a cold front had moved through Donora and was followed by very little wind. The air became stagnant with cold air confined below warmer air, which trapped pollutants and acted as a “lid” over the valley. Donora's location, in a narrow valley surrounded by hills and cliffs, meant that the thick polluted air was trapped within this topography -- with deadly effect. 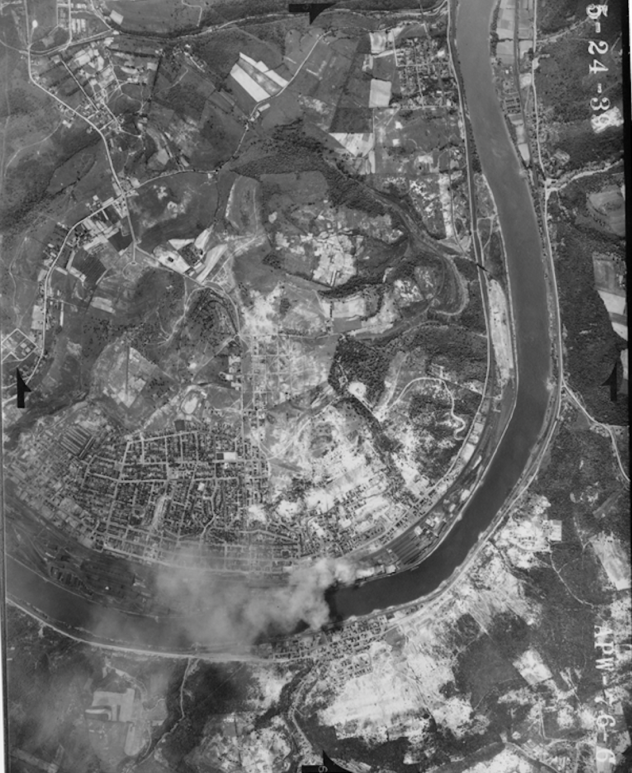 The town of Donora, Pennsylvania, shown in this aerial photo from 1939, was the site of a smog incident that left over a dozen dead in 1948. (Photo via Donora Historical Society)

Donora sits on a horseshoe bend, and it is surrounded by hills that rise 400 feet tall on all four sides. It's "the classic bowl-shaped valley," Pawlewec explained, adding that the Zinc Works' stacks were only 100 feet tall. As cold air pooled into the valley, the dangerous emissions from the steel mill had no way of escaping due to the region's topography and the weather setup.

The growing blanket of smog was once again met with indifference, at least at first. The borough's annual Halloween parade went on as scheduled, and the local high school football game was played the next day amid extremely low visibility.

"The smog created a burning sensation in your throat and eyes and nose, but we still thought that was just normal for Donora," Charles Stacey, who was a senior in high school at the time, told NPR in 2009.

Despite the business-as-usual attitude, concern began to grow when residents started calling their doctors with reports of respiratory distress. Due to the dense fog, doctors and other first responders in area vehicles had to be guided by someone on foot with a flashlight. 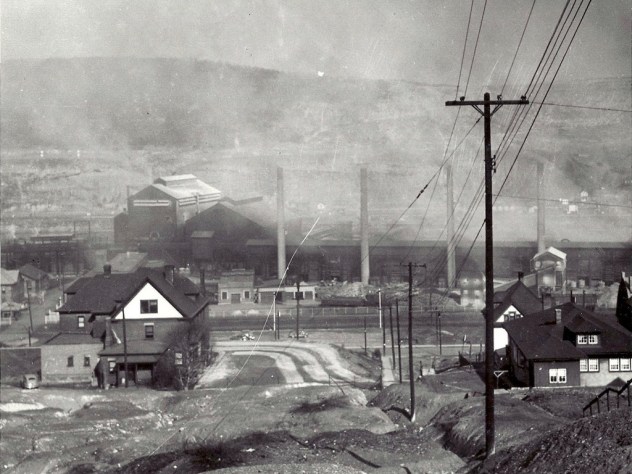 A town known for its industrialization, Donora routinely had smoke fill the air from local plants in the early 1900s, culminating in the deadly smog tragedy of 1948. (Photo via Donora Historical Society)

Eventually, the smog was too much for such maneuvering, and emergency responders had to go door to door to provide oxygen to residents gasping for air. Those with growing health issues were also unable to leave town since the dense fog left roads impassable.

It wasn't just pollution from the mill that fueled the disaster. Pollution from people's coal furnaces added to the toxic smog. "The sun didn’t have as much of an effect on dispersing the fog," Pawlewec said, so the air just became more and more contaminated. "We heard stories where people couldn’t see the hand in front of their face."

The first of what would eventually be 20 total deaths reported in Donora and the nearby town of Webster took place at approximately 2 a.m. on Oct. 30, 1948. Over the next 12 hours, 16 more people would die while physicians and first responders continued to visit the homes of the ill. 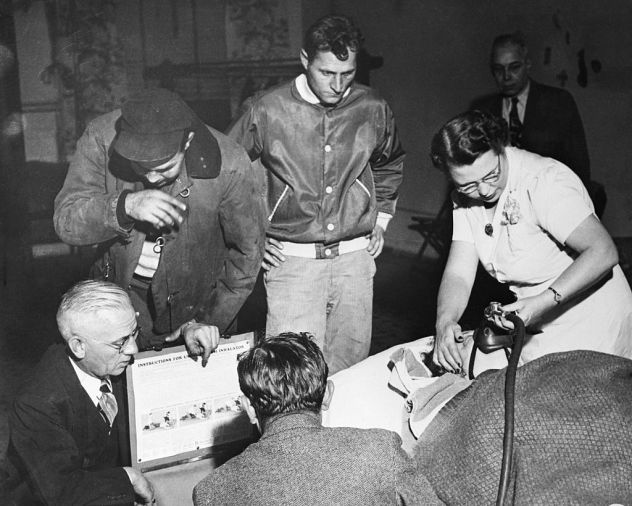 A nurse administers oxygen to a patient in the emergency hospital in Donora, Pennsylvania, during the smoky, lethal fog that enveloped the small mill town. (Getty Images)

"Things like 911 didn't exist ... they went out on foot, they carried oxygen tanks, they went door to door ... they gave shots of oxygen out of the tank ... the hard thing for them was leaving those houses," Pawlewec said. "[People] may have had a good shot of oxygen, but they knew maybe their symptoms would reoccur, and they would beg the firefighters to stay. But, they had to move on to the next house ... they had a hard time navigating the streets."

By the time the crisis had abated, over 1,400 individuals were stricken with a serious illness, while more than 4,400 had reported some mild to moderate symptoms related to the smog. The severe pollution also claimed the lives of 800 animals, according to officials.

After the smog had finally lifted during the first days of November, the previously apathetic town was now conflicted, looking for answers but unwilling to outright blame their employers at American Steel and Wire as well as Donora Zinc Works. Eventually, an investigation into the smog was ordered by the United States Public Health Service (USPHS), becoming the first large-scale study of a public health crisis in U.S. history.

After a lengthy and extensive probe that included analyzing weather conditions, the federal government was unable to identify one key contaminant or source of the smog. But officials did identify three factors that led to the tragedy: the pollutants emitted by the plants, the temperature inversion and the unique geography of the Donora valley that further entrapped the pollutants.

A subsequent report on the findings offered recommendations to prevent such an event from reoccurring, such as creating a weather alert system to warn the region of conditions that could produce further smog incidents. 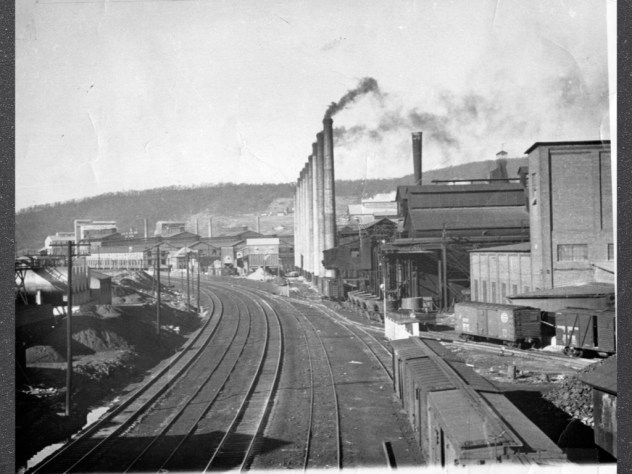 The smoke that billowed from local industrial plants in Donora eventually paved the way for the modern "clean air" movement in the United States. (Photo via Donora Historical Society)

That terrible week in Donora was one of the national catalysts for the modern “clean air” movement, eventually culminating with the passing of the Clean Air Act in 1963. The act set standards for the concentration of pollutants in outdoor air, created requirements for industrial facilities to curb negative effects on air quality and eventually paved the way for future guidelines on a bevy of climate-related subjects.

Today, Donora’s population is roughly half of what it was back in 1948, but the borough set up a permanent reminder of what happened all those years ago with the establishment of the Donora Smog Museum, curated by the local Historical Society. A historical team carries out partnerships with other local, state and national constituents, taking part in lectures and media sessions. Their goal is to better inform people about the public health crisis and ensure such a catastrophe never happens again.