Deadliest earthquake in 20 years leaves more than 1,000 dead in Afghanistan

The death toll from an earthquake in Afghanistan on June 22 hit 1,000, with more than 600 injured. Helicopters flew into the damaged areas to provide medical supplies and food.

"The death toll is likely to rise as some of the villages are in remote areas in the mountains, and it will take some time to collect details," Salahuddin Ayubi, an interior ministry official said, Reuters reported.

With the increasing death toll, Wednesday morning's quake is now the deadliest earthquake to hit the country since 2002, when a 6.1 magnitude tremor killed about 1,000 people.

The U.S. Geological Survey recorded the magnitude at 5.9, with a depth of 6.21 miles (10 kilometers), which is a factor that could increase the amount of damage. The earthquake's epicenter was in Afghanistan's Paktika province, which is just near the border and roughly 30 miles (50 kilometers) southwest of the Afghanistan city, Khost.

The Associated Press reported that an earthquake of this intensity and depth in such a remote area is expected to cause severe damage. Homes and buildings throughout the region, according to the AP, aren’t built to sustain such shaking, which leaves them vulnerable to any earthquake let alone a powerful one.

Photos from social media show the houses and buildings that were turned into rubble after the quake shook the region. Other images show people being carried into helicopters to be airlifted from the area, while some people were being treated right at the scene.

Heavy rain and winds prevented helicopters, that were deployed in the rescue efforts to reach the injured and fly in medical supplies and food, from landing, the United Nations’ emergency response agency told The New York Times.

The rain and thunderstorms will come to an end in the region Wednesday night, AccuWeather meteorologist Nicole LoBiondo said. 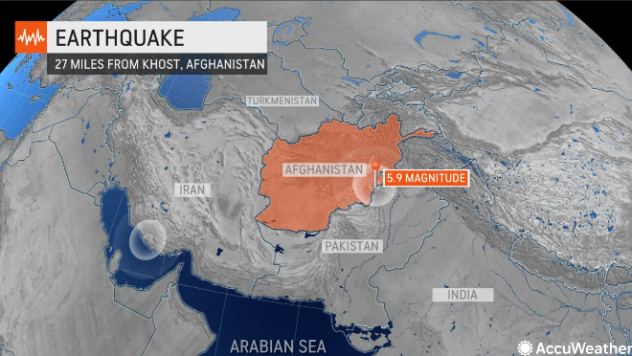 Reuters wrote that rescue efforts will be a major test for the Taliban, who took over the country in August and have been cut off from international assistance because of sanctions. Some of those sanctions were on Afghanistan's banking sector and billions of dollars of developmental aid were cut.

Despite some of the sanctions, humanitarian aid has continued with international agencies such as the United Nations (U.N.).

Afghanistan asked humanitarian agencies to help with rescue efforts, according to the U.N.'s Office for the Coordination of Humanitarian Affairs (UNOCHA), and teams were being despatched to the impacted area.

“Last night, a severe earthquake killed and injured hundreds of our countrymen and destroyed dozens of houses in the four districts of Paktika province,” Karimi wrote. “All aid agencies are urged to send their teams to the area immediately so that further catastrophe can be prevented.”

According to Maulawi Sharafuddin Muslim, the acting deputy minister for the country’s disaster management authority, the government will allocate about $11 million in aid, with about $1,000 to be given to families of the deceased and $500 each to the injured, The Washington Post reported.

"Many people are now buried in Paktika. Aid teams from Kabul have reached the area and rescue work is underway," director-general of state-run Bakhtar news agency, Abdul Wahid Rayan, wrote on Twitter.

Adding to the challenge for Afghan authorities is recent flooding in many regions. The disaster agency said to Reuters that the floods have killed 11, left at least 50 injured and blocked stretches of highway.

#BREAKING;
More than 1000 people were killed and over 1500 others injured in Tuesday night’s #earthquake in #Gayan and #Barmal district of #Paktika province alone, Head of Information and Culture Department of the province told BNA.
The death toll is likely to rise, he added. pic.twitter.com/mI8HZy6SFX

Large areas of South Asia along the Hindu Kush mountains, including the mountainous Afghanistan region, are exceptionally vulnerable to devastating earthquakes.

“There are numerous fault lines in the Hindu Kush mountains that are responsible for the high magnitude of earthquakes that happen in the region,” LoBiondo said.