Denmark has embarked on a 50-year project to construct the man-made peninsula, which officials hope will protect its capital city from the threat of rising sea levels.

More than 40 coastal villages in Fiji are under the threat of rising sea levels and might be forced to be relocated inland in the next several years.

(CNN) -- In January 2022, a team of developers, architects and environmental consultants began work on a 50-year project that — if completed — will become one of Denmark's most ambitious and controversial infrastructure schemes to date: A 271-acre man-made peninsula devised to shield its capital, Copenhagen, from rising sea levels.

Real estate developer By & Havn believes the cape-like design, known as Lynetteholm, is essential for the protection of the port city, highlighting Copenhagen's history of dangerous storms and severe flooding. "(Climate) predictions are not getting better," said the firm's plant manager and harbor master, Hans Vasehus, during a site visit. "We've got to — if we can — change."

But the $439 million environmental project has drawn vocal criticism — primarily, and somewhat ironically, from those concerned about the climate.

Those opposing Lynetteholm worry construction of the peninsula is already damaging habitats and contaminating surrounding waters, poisoning the city's harbors and disturbing the delicately balanced salinity of the Baltic sea.

When Lynetteholm was approved by a parliamentary vote in June 2021, the decision was met with public outrage, protests and even attempted legal action. Demonstrators from the 16,000-strong "Stop Lynetteholm!" Facebook group arrived outside the Danish parliament holding placards and wearing sheep costumes. In June 2021, climate organization Klimabevægelsen lodged a petition with the European Parliament claiming the Danish government broke EU law by failing to carry out an adequate assessment of Lynetteholm's environmental impact (the European Commission dismissed the complaint in September). 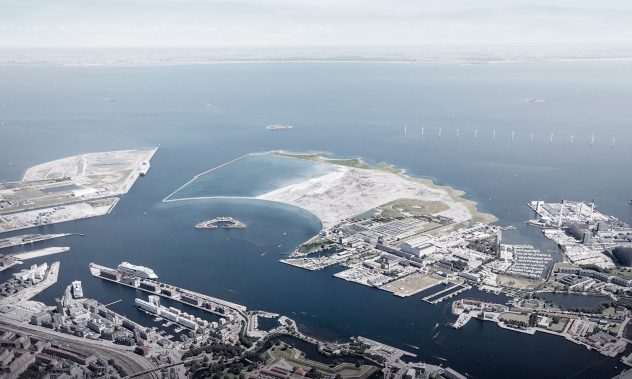 An artificial coastline will face out into the Øresund. (COWI/Arkitema and Tredje Natur)

At a ceremony marking the start of construction in January 2022, Copenhagen's mayor Sophie Hæstorp Andersen, the city's transport minister Benny Engelbrecht and By & Havn's CEO Anne Skovbro were surrounded by protesters as they symbolically shoveled Lynetteholm's first piles of dirt. One protester even lay on the ground during the photocall, according to the local newspaper Copenhagen Post.

The Intergovernmental Panel on Climate Change (IPCC) predicts 9 to 12 additional inches of global sea-level rise by 2050, on top of the 8 to 9 inches already it has already risen since the industrial revolution. Research predicts Copenhagen will be one of the regions most affected by rising sea levels — with parts of the city already sitting just a few feet above the sea's surface.

"Large parts of Copenhagen and the surrounding areas will be flooded," said Vasehus. "The metro (subway) will be flooded in the worst cases, and they'll be out of business for a year. Copenhagen would be hit really hard."

While there's not much to see yet, blueprints for Lynetteholm outline a batwing-shaped peninsula with a small western dam shielding the city's port. An artificial coastline will face out into the Øresund, a strait of water that leads to the Baltic Sea. Instead of the typical concrete sea-wall, landscape architects hope this will be an example of "adaptive design" that can be modified in the future. Just as a naturally occurring beach can buffer and reflect powerful wave energy, designers believe Lynetteholm's man-made shoreline will absorb and dissipate incoming waves. Architects argue the wide and purposely jagged coastline will be far easier to bolster and even raise, if sea levels exceed forecasts, than extending a wall higher.

"Instead of going vertically high, we go wide," said Ole Schrøder, a partner at Tredje Natur, one of the architecture firms involved in the project.

"If it were a vertical wall, it would become fragile were the sea levels rise on top with waves," he added. "But here, we can better accumulate the waves with a beach landscape that absorbs them with a more natural approach." 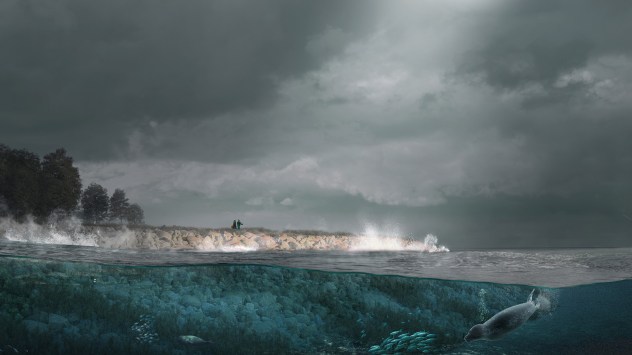 Landscape architects meanwhile hope the project's shoreline — which they have envisaged as a so-called "process landscape," designed to be developed over time — will promote biodiversity over the next 10 to 30 years through its mixture of flatlands, forestry and beaches.

"The idea was to somehow respect the original type of nature that was here before we came," said Schrøder.

35,000 new homes are scheduled to be built on Lynetteholm's flatlands, and although the IPCC advises against new developments in "exposed coastal locations," it does recommend construction projects that prioritize protecting ecosystems. "We're creating habitats, either naturally or artificially, to create environments for fish, shellfish, seagrass," said Schrøder. "It's not a design, it's designing a process that will evolve over time."

Criticisms of the project are multi-faceted, with those opposed to Lynetteholm emphasizing fears the peninsula will become an example of maladaptation (a term used to describe architecture that is built to address climate change but itself causes significant environmental damage).

Its positioning has already attracted criticism over potential threats to the delicate saline balance of the surrounding waters, which could kill local organisms and wreck habitats. By & Havn was also forced to alter construction plans after protesters argued that dumping the excavated soil in the city's harbors could pollute the waters and damage wildlife.

"We cannot exactly tell you what is toxic in the sludge," said protestor Kathrime Hammich while on a group video call with the Stop Lynetteholm! campaign. "But we know that a part of the project will be built on a place where there have been shipyards in the past, and they have everything from paint to (old ship) parts (buried) in the harbor." While Vasehus insists removed soil will be "uncontaminated," he admitted that his firm's original proposal for disposing of soil was "not in fashion anymore." 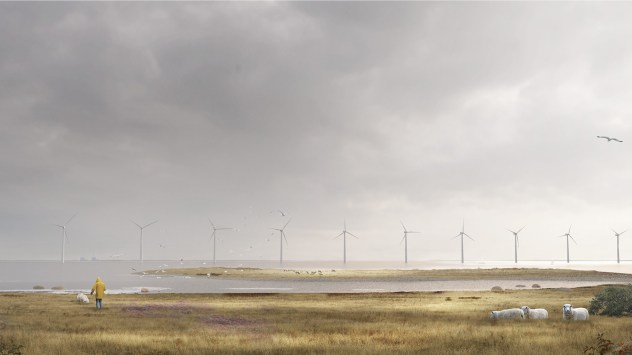 About 35,000 homes are scheduled to be built on Lynetteholm's plains. (COWI/Arkitema and Tredje Natur)

The project's fluid budget is another issue for critics. The initial phase of construction was reportedly expected to cost 300 million Danish krone (approximately $43 million), but By & Havn admits the budget will likely reach more than 10 times that amount. The entire project's budget now stands at 70 billion DK ($9.9 billion).

The young people opposing the project "feel their agency is being taken away," said Nicholas Woollhead, another member of the protest group. "The plans that are being made bind them to a budget for the next 70 or 100 years," he added.

"We decided to live in Copenhagen (because) it's a nice city to live in," added fellow protester Marcello Morns. "And somehow now it's going to be a construction project. It's going to make Copenhagen noisy and dirty for the rest of my life."

Lynetteholm is not the only project of its kind on Copenhagen's horizon. In fact, an entire man-made archipelago is set to be built in the harbor in coming years. Also developed with rising sea levels and urban flooding in mind, the project was designed by MAST, an architectural firm currently formulating a prototype of floating pavilion platforms they hope can one day be used to build homes on water.

It's more evidence of a new wave of climate-focused architecture beginning to emerge. More and more firms are opting for repurposed materials to mitigate the impact of the environmental emergency, or trialing evolving construction techniques — like MAST — to better adjust to different conditions. Landscape architects, such as those behind Lynetteholm, are increasingly meeting the fluid reality of climate change with adaptive design.

While it seems there is no going back now (Lynetteholm's first phase of construction is already on-schedule to be completed by early 2023), one of the project's biggest challenges will be convincing the public. In November, developers By & Havn announced they will be holding citizens meetings with 66 members of the public from Copenhagen and the surrounding area in an attempt to engage with mounting criticism.

"I still think that parliament and the municipality is in general behind us," said Vasehus. "There is an audience in Denmark that is against this, sure, there's a lot of individuals against us, they might have their own ideas. Some of the people living out here do not think this is an attraction, and I can understand that."

'A world rapidly warming': The past eight years were the eight warmest on record for planet
EPA proposes new rule to crack down on deadly air pollution
Drone captures striking images of polar bears turning weather station into Arctic playground
Report a Typo