The drought-plagued regions of South America will see little to no relief this winter as a dry weather pattern continues to hold across the northern extent of the continent.

“Weak El Niño conditions will likely be a factor in the overall pattern across South America much of the winter,” AccuWeather Lead International Meteorologist Jason Nicholls said.

Meanwhile, people from around the globe will be keeping a close eye on the weather pattern in Chile and Argentina in early July as onlookers gather to see the first total solar eclipse anywhere in the world since 2017. 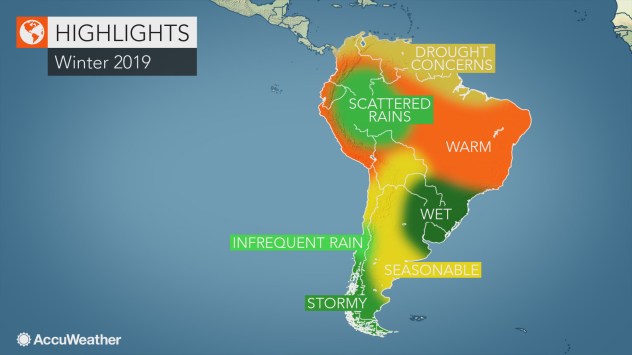 Rains to focus on southern Brazil, Paraguay and Uruguay

A wet winter is on tap for southeastern Brazil as rain frequents the region, bringing the risk of flooding.

The primary areas of Brazil that can anticipate potentially flooding rain include the states of Rio Grande Do Sul to Parana and southern Mato Grosso Do Sul.

“Cold shots will be limited, but there can be a few shots of cold air into these areas later in June and July,” Nicholls said.

“Wet snowflakes cannot be ruled out into portions of Buenos Aires, La Pampa and Cordoba provinces,” he added.

Chilly wintry air will be hard to come by farther north in Brazil as much of the country experiences a largely warm and dry season.

“However, a scattered frost event or two cannot be ruled out as far north as Parana and interior portions of Sao Paulo,“ Nicholls added.

Drought to grow worse from Colombia through Venezuela, Guyana

Another season of drought is in store for the northern extent of South America as the region stays mainly dry through August.

“Drought conditions will continue across northern Colombia into Venezuela, Guyana and parts of the Brazilian state of Roraima with only minor relief, despite the opportunities for needed rainfall, “ Nicholls said.

The best opportunities for rain will come during the second half of the winter, but they will be mainly focused on Suriname, French Guiana and the Brazilian states of Amapa and Para.

The long-term drought is already taking a major toll on the agriculture across the region.

Up to 60 percent of the plantations in Cordoba, Colombia, have been severely impacted by the drought, according to Fresh Plaza.

Cordoba accounts for 10 percent of the nation’s plantain crop with 150,000 families depending on the crop.

These types of impacts may become even more widespread in the coming months.

Winter storms to track over

A fairly typical winter weather pattern is projected for most of Argentina and areas through northern Chile and into Bolivia.

“Overall, central Chile will have near- to above-normal temperatures with precipitation averaging a little below normal for the season,” Nicholls said.

Systems that do move into this region will be largely focused on southern Chile and southern Argentina, although a few opportunities for rain may arrive in central Chile during the second half of the winter.

“Any systems into central Chile early in winter will favor precipitation over the Andes with any rainfall in Santiago and the valleys of central Chile tending to be light and infrequent,“ Nicholls said.

The lack of winter rains may benefit those traveling to the region for the upcoming total solar eclipse on July 2, 2019.

The path of totality, or area where the total solar eclipse will be visible, will extend from the coast of central Chile, over the Andes and across central Argentina.

The balance of the continent will be able to see a partial solar eclipse.

Skygazers will benefit from the largely tranquil pattern expected during the first part of the winter.