Above-average February temperatures set over 1,000 new records in US alone

As the coronavirus pandemic affects almost every aspect of daily life, many wonder if warm weather will inhibit the spread of the virus. AccuWeather founder and CEO Dr. Joel Myers shares his insights.

After delivering waves of springlike temperatures across the globe and even toppling a few daily highs, February 2020 ranked globally as the second warmest on record, which date back to 1880.

The month's global land and ocean surface temperature departure from average measured 1.17 degrees Celsius (2.11 F) above the 20th century average, according to the National Oceanic and Atmospheric Administration's National Climate Report. This falls less than a tenth of a degree from February 2016's departure of 1.26 degrees Celsius (2.27 F), which was the warmest recorded February on record.

This was the 44th consecutive February and 422nd consecutive month with temperatures nominally above the 20th century average, according to NOAA. 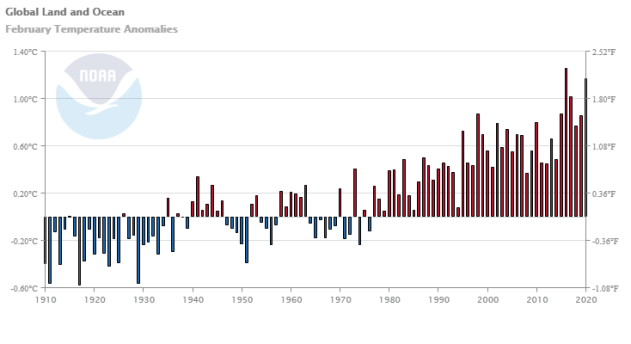 February average global land and ocean temperature departures from average from 1880 to 2020. (Image/NOAA)

"The 10 warmest Februarys on record globally have all occurred since 1998," AccuWeather Senior Meteorologist Brett Anderson said.

Unlike during 2016, this year's February did not get a boost in temperatures from El Niño -- a routine climate pattern when sea surface temperatures in the tropical Pacific Ocean rise to above-normal levels for an extended period of time. The last February that wasn't during an El Niño year was in 2018, when the global land and ocean surface temperatures only reached 0.77 degrees Celsius above average.

Ghost ship lands in ‘one in a million’ place during Storm Dennis
Storm Ciara cuts power to more than 500,000 in UK, brings travel to a standstill in northern Europe
Weather station in Antarctica records high of 65, the continent’s hottest temperature ever

For the contiguous U.S., this February was ranked among the warmest one-third of the 126-year period of record. There were at least 1,438 daily record daily high temperature records across the nation during February 2020, according to NOAA.

Antarctica even set an all-time high record when a weather station recorded the highest recorded temperature on the continent, 65 degrees Fahrenheit, near the beginning of the month. 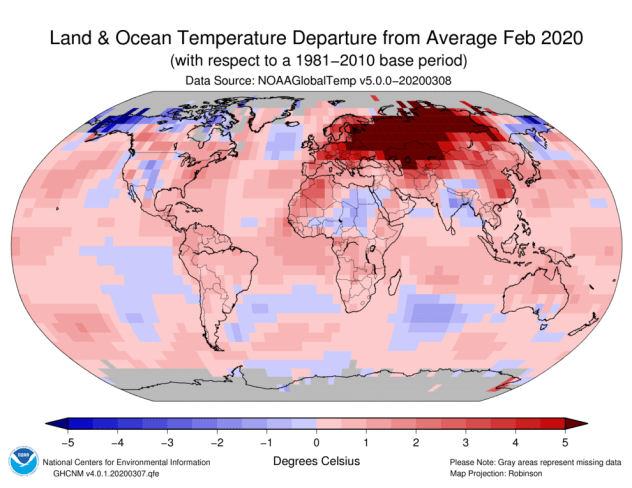 Although February 2020 wasn't the warmest globally, it still reached the warmest on record for a few nations. (Image/NOAA)

Much of Asia and the Caribbean region also had their warmest February, according to Anderson. This was also the driest February on record for Spain.

On the other end of the spectrum, February 2020 was the wettest on record for the United Kingdom, recording 209.1 mm of rain (8.23 inches), or about 237 percent of normal after enduring storms Ciara, Dennis and Jorge.

There also some corners of the world that did experience abnormally low temperatures this winter.

"It was not warm everywhere," Anderson said. "Alaska, northern Canada and far-eastern Russia were abnormally cold in February due mostly to the fact that the polar vortex, which was very strong, basically sat over the far-northern latitudes through the month, leading to persistent cold and significant sea ice growth."