Storm Ciara cuts power to more than 500,000 in UK, brings travel to a standstill in northern Europe

On Feb. 9, Storm Ciara kicked up strong winds and heavy rain across the United Kingdom, and made massive waves in Criccieth, Wales, that flooded coastal roads.

The name Ciara was given to the storm on Wednesday by the UK Met Office, which had warned ahead of time it could be the biggest of the season for the country. In Germany, the storm is known as Sabine.

Ciara is the third-named windstorm of the season by the United Kingdom, Ireland and Netherlands. The windstorm season begins in September and continues through the end of April. 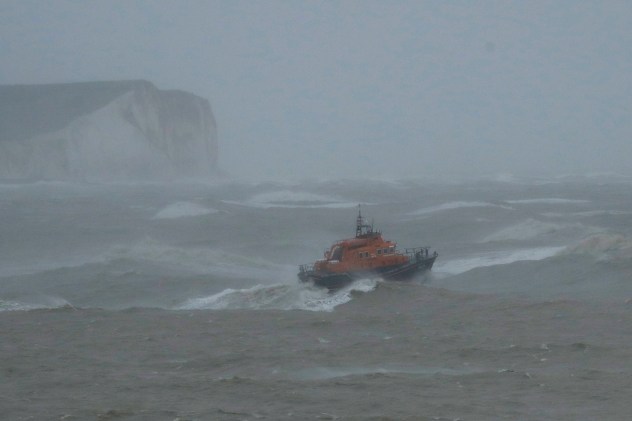 A lifeboat passes white cliffs, as Storm Ciara hits Newhaven, on the south coast of England, Sunday, Feb. 9, 2020. Trains, flights and ferries have been cancelled and weather warnings issued across the United Kingdom and in northern Europe as the storm with winds expected to reach hurricane levels batters the region. (AP Photo/Matt Dunham)

At least five people were killed in storm-related incidents, according to the Associated Press.

Deaths were reported in the United Kingdom, Poland, Sweden and Slovenia. Many other injuries were reported across northern Europe due to trees falling on automobiles and flying debris from the fierce winds.

Several news outlets reported a death due to the strong winds in the Netherlands.

The full force of Ciara was felt across Ireland and the United Kingdom Saturday night into Sunday as powerful winds whipped across the region and downpours caused flooding. 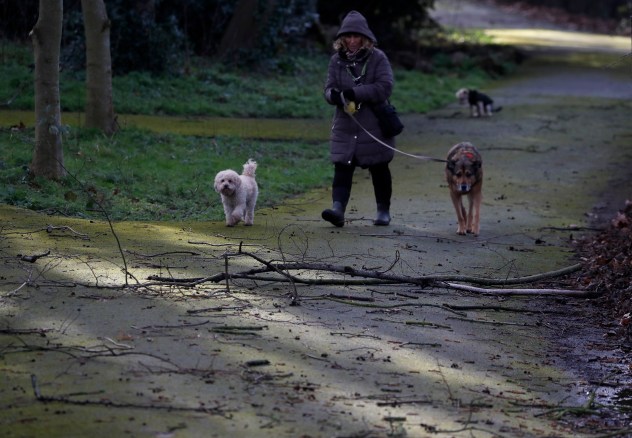 Tree debris on the path as a woman walks her dogs in a park in the aftermath of Storm Ciara, in London, Monday, Feb. 10, 2020. Storm Ciara battered the U.K. and northern Europe with hurricane-force winds and heavy rains Sunday, halting flights and trains and producing heaving seas that closed down ports. Soccer games, farmers' markets and cultural events were canceled as authorities urged millions of people to stay indoors, away from falling tree branches. (AP Photo/Frank Augstein)

As of Monday, total power cuts have totaled nearly half a million across the United Kingdom, according to the BBC.

Elsewhere, more than 125,000 homes and businesses were left without power from Sunday into Monday across France, according to the AP.

An additional 290,000 power outages were reported in Czechia on Monday. 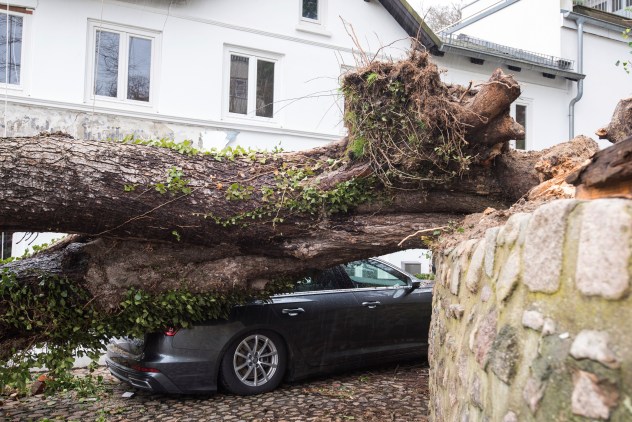 A tree lies on a car in Hamburg, Germany, Monday, Feb. 10, 2020. A storm battered the U.K. and northern Europe with hurricane-force winds and heavy rains Sunday, halting flights and trains and producing heaving seas that closed down ports. Soccer games, farmers' markets and cultural events were canceled as authorities urged millions of people to stay indoors, away from falling tree branches. (Daniel Bockwoldt/dpa via AP)

More than 1,000 flights were cancelled across northern Europe from Sunday into Monday.

Hundreds of flights traveling to and departing from the London Heathrow Airport were canceled, while a flight from Geneva, Switzerland, had to be rerouted to Lyon, France, after numerous failed attempts to land at the London Gatwick Airport.

Planes could be seen struggling to land or take off due to dangerous crosswinds at Birmingham Airport.

However, there was a unique instance were travel was aided by the storm. A British Airways flight from JFK International Airport in New York crossed the Atlantic to Heathrow Airport in London on Sunday in record time.

Flight operations were suspended in other airports across the continent due to dangerous weather conditions.

Long-distance train service was suspended in Germany and France where there have been reports of trees falling on train lines.

In the Cairngorm Mountains, a wind gust of 118 mph (190 km/h) was reported, which is the highest wind gust attributed to the storm so far.

When driving in fog you should remember these tips Storm Ciara fast-tracks plane flying from JFK to Heathrow in under 5 hours, breaks record Trains, flights cancelled in northern Europe following Storm Ciara

These strongest wind gusts damaged structures, knocked over signs and trees and tossed around trampolines and wheelie bins alike. 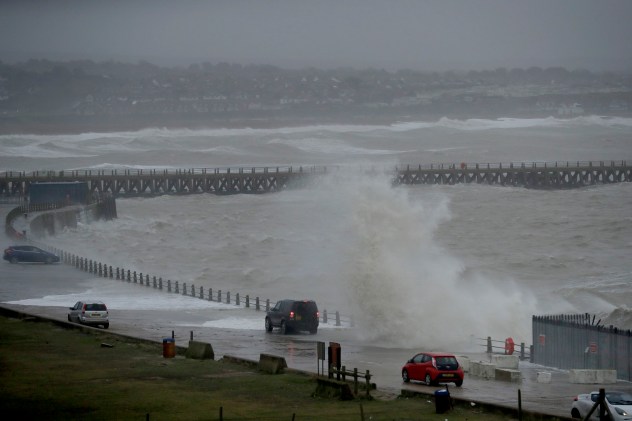 A wave crashes over the sea wall as cars slowly pass, as Storm Ciara hits Newhaven, on the south coast of England, Sunday, Feb. 9, 2020. Trains, flights and ferries have been cancelled and weather warnings issued across the United Kingdom and in northern Europe as the storm with winds expected to reach hurricane levels batters the region. (AP Photo/Matt Dunham)

Flooding was another problem as Ciara swept through the U.K. Numerous locations from Wales into Northern England, Scotland and Northern Ireland reported 25-50 mm (1-2 inches) rainfall totals.

A band of heavier rain dumped over 100 mm (4 inches) of rain in northern Wales and Northern England.

Powerful waves could be seen slamming onto shore and washing out roads in Wales. Monstrous waves were also observed in Galway, Ireland, and the turbulent waters caused boats to rock violently as they navigated the unsettled seas.

More than 140 flood warnings were still active on Monday morning as Ciara exited the region.

In the town of Brentwood, east of London, a car fell into a sinkhole in a residential street. Six properties also had to be evacuated due to the unstable ground that may be linked to a partially collapsed sewer from recent flooding.

Following Ciara, blustery and cold weather will continue into Wednesday with showers and hill snow expected.

Another storm is set to bring downpours to the United Kingdom on Thursday which may renew flooding problems.

A second storm may arrive this weekend with widespread strong winds and downpours. This storm could become a named windstorm and the next name on the list for this season is Dennis.

A volcano that created ‘one of the best climates in the worl...

Cool, dry air to follow stormy stretch in northeastern US Storm puts on a lightning show over Ohio racetrack Why endangered turtles swim to a Mediterranean island