AccuWeather meteorologists say a sharp cooldown will unfold across the northeastern United States this weekend which will make it feel like November rather than early October. The colder air will bring an end to the brief stretch of warmth the region experienced in the wake of a coastal storm, but residents should not pack their warm weather attire away for the season just yet.

"A cold front will arrive across portions of the interior Northeast and bring showers and temperatures comparable to late fall," said AccuWeather Meteorologist Alyssa Smithmyer.

The air has already gotten cold enough for a frost or freeze Friday night and early Saturday morning, with frost and freeze alerts in effect for many areas. The same conditions will expand into parts of the Eastern states on Saturday night.

Frost and freeze alerts, shaded in blue, are in effect for a large swath of the Midwest and eastern states.

Around the Great Lakes and the Northeast, a brisk wind will make AccuWeather RealFeel® Temperatures several degrees lower than what the thermometer reads through Saturday.

At the coast, Friday's warmth is unlikely to be repeated on Saturday, with colder air and a brisk wind will affect the entire Northeast. 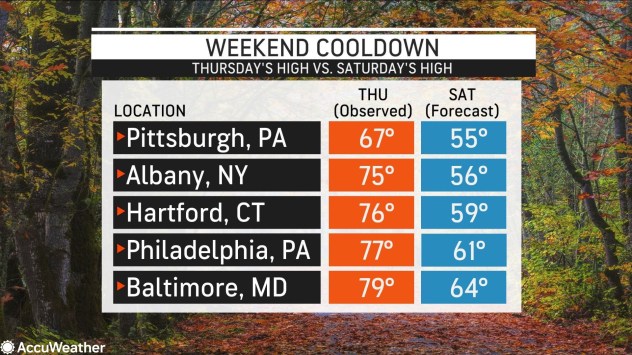 A brisk start to the weekend is expected Saturday. A spotty shower will be possible very early in the day in eastern Massachusetts, but many locations will have sunshine and some clouds.

Near Lake Ontario and Lake Erie, the colder air moving across the relatively warmer lakes could create some lake-effect rain showers. This is the same mechanism that causes lake-effect snow later in the fall and in the winter, but the air mass moving in will not be cold enough for frozen precipitation in most locations. 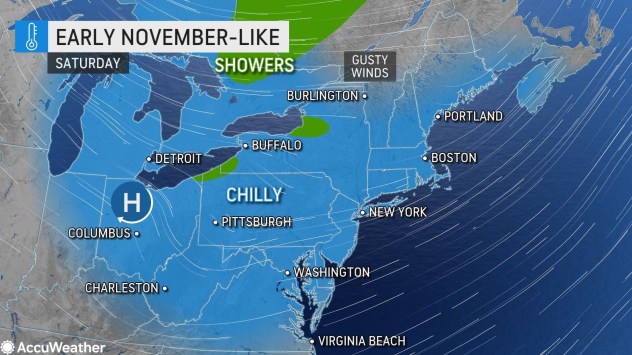 Only locations closest to the lakes will have any light rain Saturday, with the greatest concentration of showers north of the Canadian border. Where it manages to rain hard over the hilly terrain, a few snowflakes can mix in.

High pressure will move eastward from the Ohio Valley Saturday night. This will cause the wind to diminish and present a higher risk of a frost or a freeze, which could end the growing season over many interior locations. 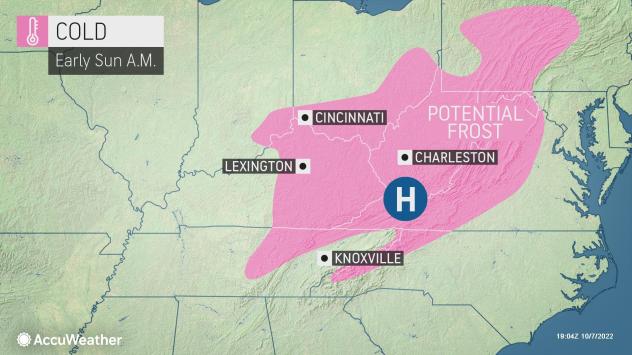 A breeze over the northern tier of the Northeast may prevent a frost Saturday night, but one may occur on Sunday night.

"The loss of daylight accelerates through the months of September and October across the Northern Hemisphere, which allows for more cooling at night," explained AccuWeather Meteorologist Matt Benz.

Benz added that this also causes a greater temperature change in the wake of any cold fronts.

At the coast, low temperatures will be in the 40s both Friday night and Saturday night. It is typically not until later in October or even November when the first frost occurs from Boston to Washington, D.C. 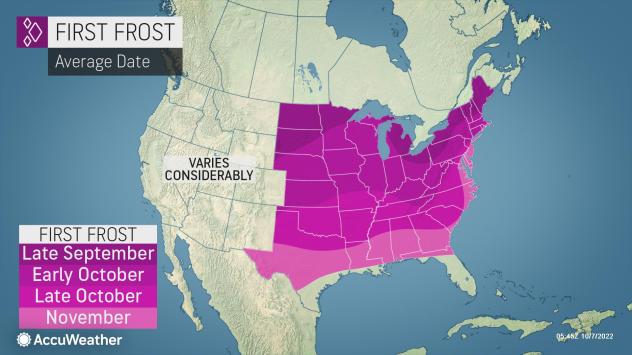 Warmth to erase colder air by early next week

Temperatures will slowly begin to moderate Sunday and Monday, according to AccuWeather forecasters. By Tuesday, cities such as Philadelphia and Harrisburg, Pennsylvania, could be back into the lower 70s, while Boston and New York City are likely to be in the upper 60s. In all instances, these temperatures would be slightly above normal for this time of year.

Even higher temperatures are likely Wednesday, but a strong cold front will be located to the west. Clouds and rain from that front will cause temperatures to begin to trend downward Thursday. Showers could linger into Friday.

Longer-range forecasts indicate that the air mass next weekend could be colder than the air arriving this weekend. If that is the case, then any lingering moisture next Saturday may allow the first snowflakes of the season to fly in parts of northern New England.

Although normal temperatures rapidly fall this time of year, ups and downs are typical.

"This upcoming week highlights a classic fall pattern as colder air building across Canada starts to spill southward, but warmer air typically returns in between these initial incursions of cold," said Benz.

AccuWeather's long-range forecasting team says it is possible that temperatures will trend upward once again in the week before Halloween.