After reaching hurricane strength early Saturday evening, Julia made landfall in Nicaragua early Sunday morning and crossed into the eastern Pacific that night. AccuWeather meteorologists warned that life-threatening impacts were expected in the continue in portions of Central America as torrential rain continued to fall, even away from the coast.

The disturbance AccuWeather has been tracking for over a week and dubbed a tropical rainstorm on Tuesday was upgraded by the National Hurricane Center (NHC) to Tropical Depression 13 on Thursday night. At midday on Friday, the NHC said the depression had strengthened into the 10th tropical storm of the 2022 season. On Saturday evening, the NHC upgraded the storm to hurricane status, making Julia the 5th hurricane of the season.

At 3:15 a.m. EDT Sunday, the time of landfall, Julia was moving toward the west at 16 mph (26 km/h) with maximum sustained winds of 85 mph, making it a Category 1 hurricane on the Saffir-Simpson Hurricane Wind Scale. Julia's center was located near Pearl Lagoon, Nicaragua. Late Sunday morning, local time, Julia lost wind intensity and again became a tropical storm with sustained wind speeds of 70 mph (110 km/h). As of 1 p.m. EDT Sunday, sustained wind speed was down to 40 mph (65 km/h). The storm was centered roughly 15 miles south of San Salvador, El Salvador. 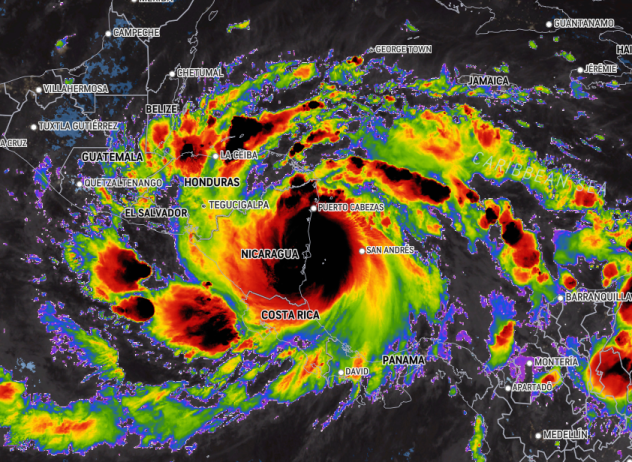 Preparations were made for many in the path of the storm. In Colombia, President Gustavo Petro announced the government was preparing shelters on the islands, according to the Associated Press. San Andrés officials announced a curfew for residents that began at 6 a.m. on Saturday.

Light damage was reported off the coast of Nicaragua in the Colombia Caribbean islands of San Andres and Providencia on Sunday morning, according to Colombia President Gustavo Petro. According to AP News, damaging winds led to extensive damage to trees and roofs in Nicaragua, and flooding had prompted evacuations and forced the closure of several heavily travelled roadways. 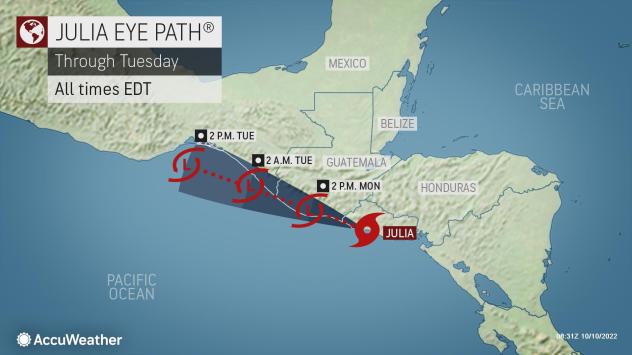 The only deterrent to the storm's development much of last week had been the proximity to the coast of South America. The system moved steadily westward all week and was responsible for torrential rain and flooding early on in the Windward Islands of Trinidad and Tobago. Torrential downpours spread westward through the northern coast of Venezuela and the ABC Islands during the middle days of last week. Tragically, the combination of flooding rainfall and poor infrastructure led to a destructive mudslide in Venezuela, where at least 25 are confirmed dead.

Julia continued to track westward over Nicaragua on Sunday, losing wind intensity and falling back to tropical storm status on Sunday morning. However, heavy rainfall remains just as great of a threat farther inland through Monday, even as the storm is likely to become a less organized tropical rainstorm by Tuesday. 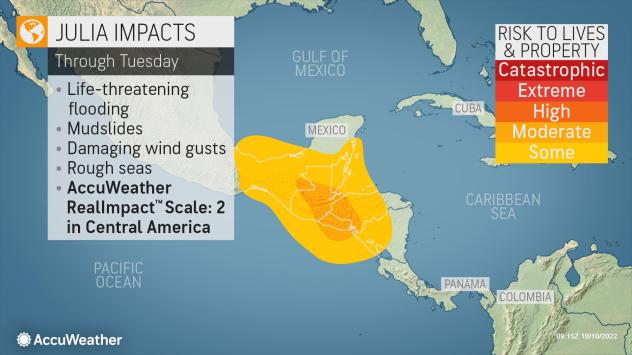 Due to Julia’s expected impacts in Central America this week, AccuWeather meteorologists have rated this storm as a 2 on the AccuWeather RealImpact™ Scale for Hurricanes.

The most far-reaching threats to lives and property are likely to stem from torrential rainfall in Central America. A general 8-12 inches (200-300 mm) is forecast in central and western Nicaragua, as well as part of southern Honduras and perhaps eastern El Salvador where an AccuWeather Local StormMax™ of 20 inches (500 mm) is anticipated. Rainfall of this magnitude will lead to major flooding of rivers, flash flooding of small streams and urban areas, and the likelihood of mudslides in mountainous terrain. 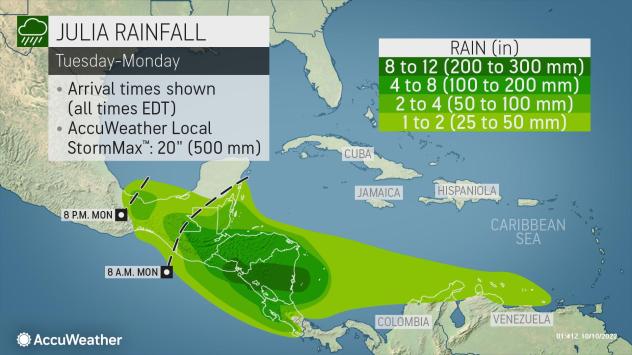 Heavy rain, flooding and localized gusty winds will spread westward and northward over Central America and into southern Mexico into Monday.

Concerns with Julia also extend to crop impacts. According to AccuWeather Meteorologist Brandon Buckingham, October is typically the month where coffee beans are harvested and the heavy rain could slow the process. Across Central America, coffee exports are a multi-billion dollar business.