Sultry week ahead for Northeast as humidity returns

Amber Rollins, director of Kids and Car Safety, speaks on the best ways to keep children safe from hot cars during the warmer months.

Following a beautiful summer weekend, AccuWeather forecasters say hot and steamy weather will soon return to the northeastern United States. Along with a rise in sticky, uncomfortable conditions, the opportunity for showers and thunderstorms will increase for portions of the region early this week.

Residents enjoyed a comfortable weekend as drier air filters southward out of Canada and into the region through Sunday. However, forecasters say Mother Nature is set to flip the comfort switch through the early part of the week.

With strong low pressure to the north in Canada, a significant amount of moisture will be drawn northward over the Northeast from Southeast states, where increased humidity from the Gulf of Mexico has already been in place for days.

In addition, the same area of high pressure that kept the Northeast comfortable this weekend is forecast to depart the region early this week. This departure, when combined with strong low pressure in Ontario, will allow a warmer and more humid mass of air to move into the Northeast.

The change will likely be noticeable quickly for residents across the region. Afternoon temperatures on Monday peaked in the 80s F for a majority of the Northeastern states with a few places that approached 90. 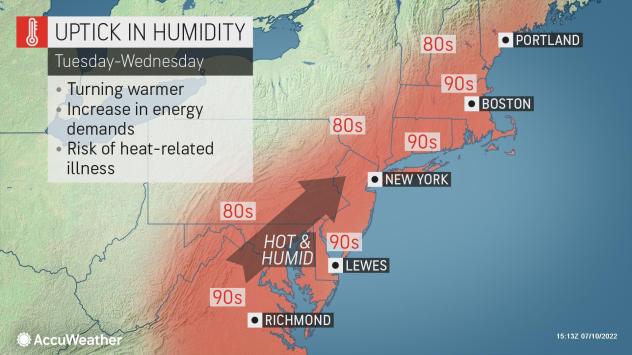 Monday is likely to end up being the hottest day of the week for places like Pittsburgh; Syracuse, New York; and Burlington, Vermont. In Pittsburgh, the Monday high was 86 degrees, while Burlington topped out at 87. Syracuse soared even higher, reaching 93 degrees Monday afternoon. Each city typically tops out in the lower 80s in early July.

For the majority of the Northeast, Tuesday will be the most uncomfortable day of the week as humidity levels peak.

In addition, high temperatures across a large swath of the region are forecast to push into the 90s on Tuesday. High temperatures in the low to-mid-90s are likely from eastern Pennsylvania through much of New Jersey and into portions of New York and southern New England. Temperatures of this magnitude are a solid 5-10 degrees above normal for mid-July.

Climatologically, mid-July is the hottest time of the year in the Northeast. While residents in the region may be used to steamy summer heat, conditions that exceed what is typical can quickly become hazardous. Forecasters urge people who plan on being outside in the heat and humidity to take precautions by limiting vigorous outdoor exercises and manual labor, as well as increasing their intake of fluids.

Always double-check cars or other vehicles before locking as temperatures can quickly reach deadly levels on summer days, experts warn.

Steamy conditions on Tuesday will also leave the atmosphere primed for showers and thunderstorms. 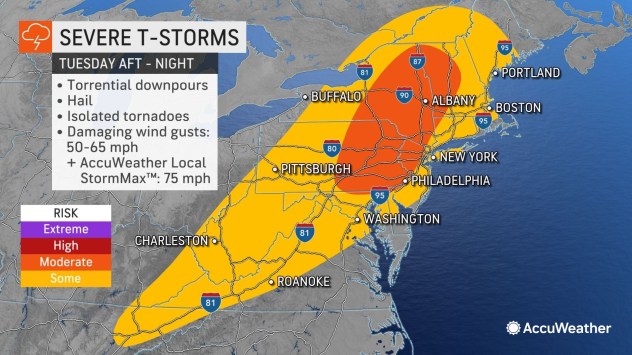 A cold front is set to cut across the Great Lakes and into the Northeast on Tuesday. This front will spark thunderstorms from West Virginia and Pennsylvania northeast into portions of northern New England. Forecasters expect that some of these storms will turn severe.

The current corridor of greatest concern stretches from eastern Pennsylvania and New Jersey through Vermont. However, isolated severe storms are possible as far north as Maine and southward to Virginia and Tennessee.

By midweek, humidity and warmth will begin to ease somewhat across the region. A period of calmer conditions can once again build into place late this week.