A break from the summertime heat and humidity is on the horizon for residents across the northeastern and part of the midwestern United States later this week, AccuWeather forecasters say.

A southward dip in the jet stream will play a significant role in pulling cooler and less humid air across the Great Lakes on Wednesday and Thursday, and the Ohio Valley and Northeast by Thursday and Friday.

"While the first half of the week will bring stifling heat and humidity to much of the East Coast, a cold front will begin to make some progress to the south and east starting Wednesday," explained AccuWeather Senior Meteorologist Carl Babinski.

As the front pulls away by the end of the week, it will carry with it the sticky conditions currently lingering across the Midwest, mid-Atlantic region, New England and Tennessee Valley. 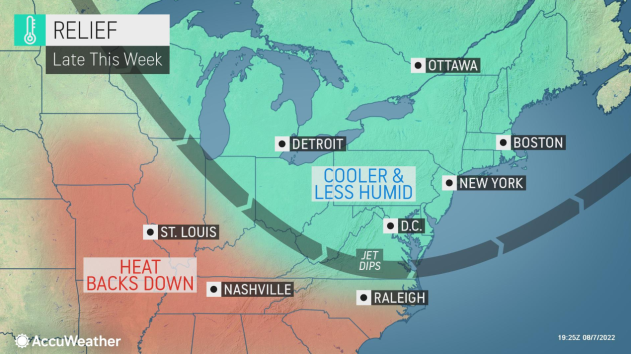 Cities that experienced their hottest day of the summer on Thursday, Aug. 4, will soon have temperatures that are a few degrees below average for this time of year. Albany, New York, topped out at 99 F on Aug. 4, the city's hottest day since July 21, 2011, but on Friday, the mercury will struggle to reach 80 F, a few ticks below normal for mid-August.

Residents will be able to notice the drop in temperature and humidity levels just in time to enjoy various county and state fairs that kicked off this week. 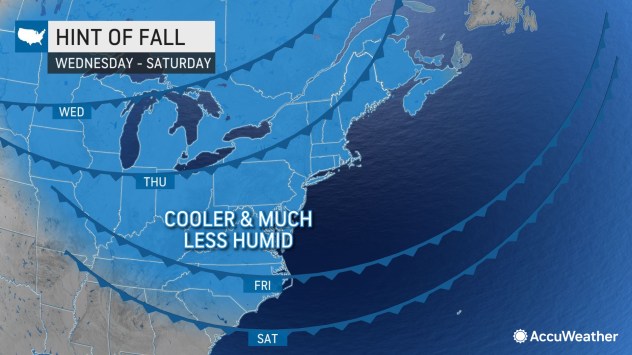 Additionally, folks planning to watch the peak of the Perseid meteor shower on Thursday night might need a blanket or sweatshirt due to the cooler overnight conditions compared to the recent mild and muggy summer nights. Partly cloudy conditions are in the forecast for most of the Northeast and Midwest on Thursday night, although the full moon will make it difficult to spot some of the dimmer meteors during the breaks in the clouds.

Prior to the late-week relief, millions of people from Boston to Baltimore will contend with a few days of typical summer heat and humidity. Temperatures in the two cities climbed well into the 90s F on Monday, with a high temperature reading at Logan International Airport recorded at 98, while Baltimore settled in at a high of 94.

After a high of 99 in Newark Monday, the city eclipsed the 100-degree mark Tuesday, the sixth such day this year. The six days of 100-degree heat in 2022 are the most in one year since nine such days in 1993.

The slow-moving cold front set to usher cooler air across the region will be preceded by thunderstorms on Wednesday that will stretch from the Northeast through the Tennessee Valley. AccuWeather forecasters are particularly concerned about flooding across a corridor that includes north-central Tennessee, central and eastern Kentucky, West Virginia, southern Ohio and far southwestern Pennsylvania.

Locally severe thunderstorms can cause area rivers and streams to rise and even result in road closures and delays, especially across regions that have observed excessive rainfall over the last few weeks, such as portions of eastern Kentucky.

Anyone traveling across the Mississippi Valley, Ohio Valley and Northeast through midweek should closely monitor the forecast with heavier thunderstorms possible. Any watches and warnings issued for flash flooding should be taken seriously, and motorists are reminded to avoid driving through any flooded roadways. 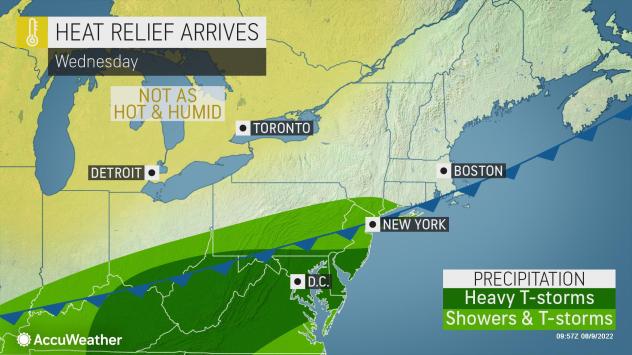 "By Friday, as some much less humid air arrives, daytime temperatures in the Northeast should range in the lower 80s," Babinski said. "New England should experience the biggest temperature drops between Tuesday and Friday of this week."

Heading into the weekend, much of the Ohio Valley and mid-Atlantic region is expected to have largely dry and comfortable weather. Along the Atlantic coast, forecasters are monitoring the chances for pockets of showers and thunderstorms to develop this weekend and bring a risk of unsettled weather across portions of New England.

The front is also forecast to dip into part of the Southeast states late this week and this weekend.

"Even though an initial surge in humidity accompanied by showers and thunderstorms is likely to take place, some cooler and less humid air is likely to be felt in parts of the Carolinas, Georgia and Alabama as the weekend progresses," AccuWeather Senior Meteorologist Alex Sosnowski said.