Northwest bakes under another heat wave

Temperatures have been trending upward across the Pacific Northwest since this past weekend, and AccuWeather meteorologists say that Mother Nature will turn the thermostat up higher for the remainder of the week.

The heat began to expand on Wednesday with temperatures reaching about 10 degrees Fahrenheit above normal in Seattle, with a high of 90 F. The mercury could climb a few ticks higher on Thursday.

Farther south, the heat will be more intense. So far this season, residents of Portland, Oregon, have experienced four days at or above 100 degrees, with Wednesday nearly becoming the fifth after a high of 98 F. Thursday will also come close to the century mark in Portland, potentially adding to this year's tally. The record for the most 100-degree days in a year in Portland stands at five, which was reached in 1941, 1977 and 2021. The city has reached the 90-degree mark 20 times this year, five above the annual average and four behind 2021's total.

Other highs in the region on Wednesday included 99 F in Medford, Oregon, and 100 F in Spokane, Washington.

"Yet again, a broad but pronounced area of high pressure moving into the area means that the Pacific Northwest is poised to get into heat that will threaten records," explained AccuWeather Meteorologist La Troy Thornton. 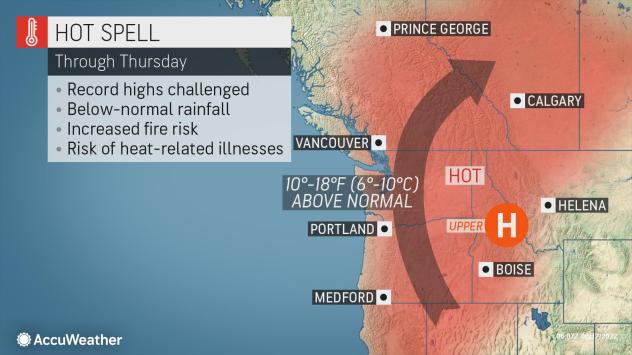 Wednesday's record highs of 96 degrees and 105 degrees in Seattle and Portland, respectively, went unchallenged, but a different story could unfold on Thursday as the heat continues to build. The current record high for Aug. 18 is 88 degrees in Seattle and 99 degrees in Portland, with both records in danger of being tied or broken. Seattle has had 11 days of 90-degree heat in 2022, already almost tripling the annual average of four and beating 2021's total of eight such days.

The heat will throttle back on Friday along the Interstate 5 corridor, but temperatures are likely to remain slightly above normal for mid-August. However, this will not be the case farther inland.

"The heat will last longer across inland areas such as Pendleton, Oregon and Boise, Idaho," said Thornton. 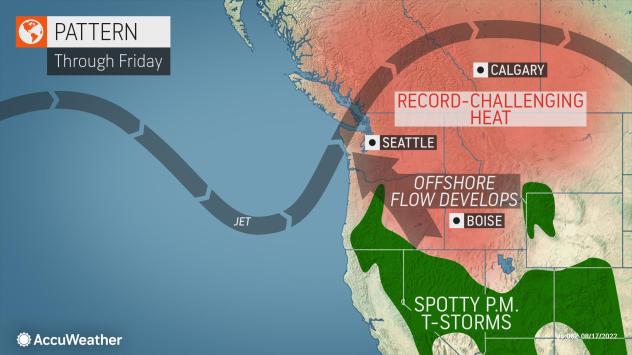 In addition to the heat, spotty thunderstorms could pop up over part of the region through Friday, especially over the mountains. Lightning from the thunderstorms will elevate the fire risk across the parched landscape.

"A ripple in the jet stream may pivot through part of the Northwest later this week, and could produce spotty dry thunderstorms," said AccuWeather Senior Meteorologist Alex Sosnowski.

Thunderstorms with lightning and little to no rain could start new fires and any gusty winds near the storms could quickly spread the flames. The highest risk for these storms will be over inland locations.

"During and soon after the last major heat wave to hit the region in late July, wildfires which were scarce in the region much of the spring and early summer, then surged," Sosnowski said. "This next dose of heat, especially where spotty storms brew, is likely to bring another boost in the number of fires."

After a short break from the heat along the coast on Friday and over the weekend, a resurgence is expected next week.

"The heat will likely rebuild by the middle of next week, although it does not appear quite as warm compared to this week's event," said Thornton.

In addition to the heat perhaps not being quite as intense, forecasters say that the risk for dry thunderstorms will be lower across the region.