Memorial Day weekend to start wet and dreary, but then hello, sunshine!

AccuWeather forecasters have the latest forecast for the Northeast -- and it's improving -- along with a look at weather elsewhere across the nation for Memorial Day weekend.

A slow-moving storm will bring flooding downpours and severe weather to the East Coast into early this weekend.

It seems the weather got the message not to ruin the entire weekend in the northeastern United States as the latest AccuWeather forecasts continue to trend drier and warmer after an anticipated rainy and stormy start.

However, in some areas, the weather will improve faster than in others, and for those hitting the road early, downpours and severe thunderstorms may cause some issues, AccuWeather meteorologists caution. As the weather improves for the heart of the weekend in the East, conditions may deteriorate over the north-central part of the country.

The same storm responsible for multiple days of showers, thunderstorms and severe weather over the Central states will continue to move slowly along as the week draws to a close. The timing of the storm system will bring the same troublesome conditions to the Appalachians and Atlantic Seaboard from into Saturday as millions hit the roads and airports to begin their first unofficial summer holiday weekend.

Nationwide, more than 39 million Americans are expected to travel more than 50 miles from home this holiday weekend, according to the auto club and insurance company AAA. The number of expected travelers represents an 8.3% boost from last year and is on par with 2017 thanks to post-lockdowns due to the COVID-19 pandemic. Plus, AAA predicts that more than 3 million travelers will take to the skies over the holiday weekend. Weather is likely to be a disruptive force at the outset of the holiday weekend travel rush.

"Motorists should anticipate delays in much of the East into Saturday in the Northeast and not only from increased traffic volume on the roads but also due to areas of torrential downpours," AccuWeather Senior Meteorologist Tony Zartman said. 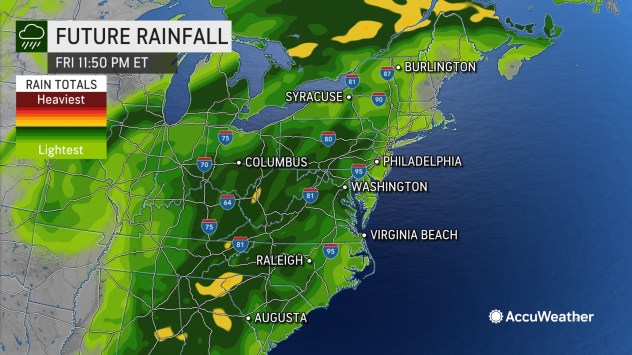 Rainfall rates of an inch-per-hour can occur in localized areas and lead to dangerous driving conditions. Downpours of this intensity are more than enough to drop the visibility on the highways to near zero and lead to ponding in poor drainage areas.

In a few extreme cases, the downpours can persist long enough to cause small streams to overtop their banks. Those with camping in mind during the early part of the weekend throughout the mid-Atlantic and Northeast should avoid low-lying areas along streams, due to the potential for rapidly rising water.

Lightning strikes and severe thunderstorms will also be a concern for those planning to begin holiday weekend activities into Saturday. 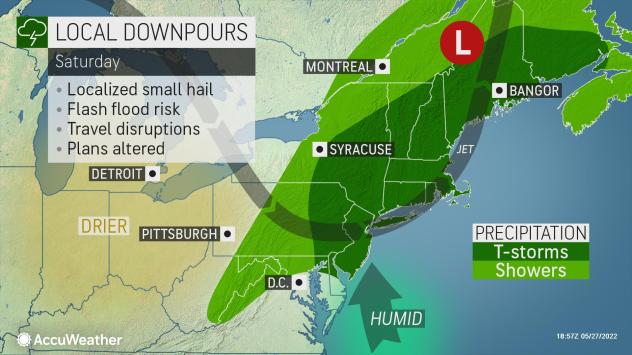 A swath of thunderstorms from the Carolinas to eastern New York brought powerful wind gusts, hail and at least one isolated tornado to the area Friday evening. The same zone of thunderstorms prompted multiple National Weather Service tornado watches in portions of Virginia, North Carolina and Maryland on Friday morning.

As the evening progressed, a potential tornado was reported a few miles from Coatesville in Hanover County, Virginia, shortly before 6:45 p.m. EDT, according to the National Weather Service.

On Saturday, the potential for flooding downpours and gusty thunderstorms will shrink over the Northeast states but can still cause trouble for outdoor plans and travel from eastern Maryland to coastal Maine.

But don't despair: The weather news gets much better for Sunday and Memorial Day in the East!

The storm is forecast to keep moving and allow a zone of drier and warmer air to build eastward from the Central states. 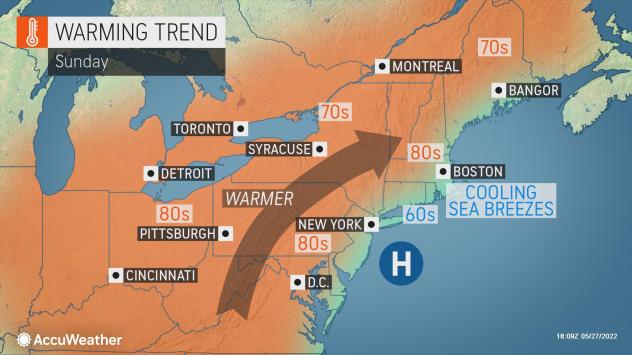 Temperatures will trend upward in the Northeast from the 60s, 70s and low 80s on Friday and Saturday to widespread highs in the 80s on Sunday and Monday. A few spots, such as Pittsburgh and Washington, D.C., could come within a few degrees of 90 on Memorial Day, in true summerlike fashion for the unofficial start of the season.

Memorial Day in the Northeast and in many other locations of the eastern half of the nation is looking spectacular and should cooperate for picnics, ballgames, parades and paying tribute to America's veterans who both risked and gave their lives for their country.

Even with the forecast temperatures from Friday to Saturday to be suppressed in the Northeast this Memorial Day weekend, it will be a far cry from part of the same holiday weekend last year in the Northeast. 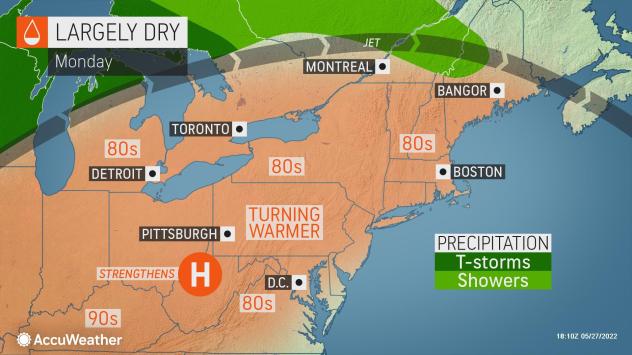 "Anything is better than last year’s wet and exceedingly chilly Memorial Day weekend people in the Northeast endured last year," AccuWeather Meteorologist Dean DeVore remarked. "But this year the weather will vastly improve and warm up as the weekend unfolds." Temperatures on Friday and Saturday of Memorial Day weekend 2021 were in the 40s, 50s and 60s, which was an uncomfortable 20-25 degrees below average.

Elsewhere in the U.S., the weather will cooperate for some big events. Clear conditions are in store for both the Indy 500 at Indianapolis on Sunday afternoon Coca-Cola 600 near Charlotte on Sunday evening. 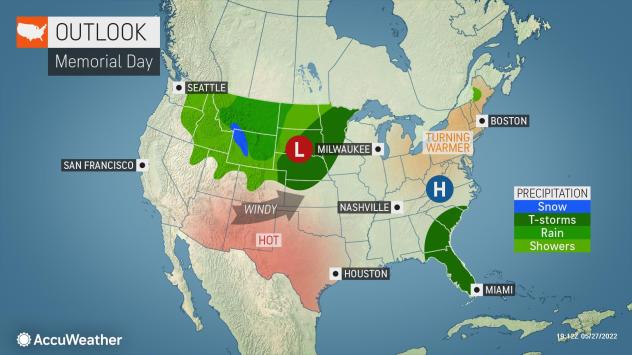 "A pair of storms will push inland over the Northwest with low-elevations showers and also mountain snow showers this weekend," AccuWeather Senior Meteorologist Bill Deger said. "Any accumulation of snow over the northern Rockies will be limited to the high country."

Farther to the east, a zone of showers and thunderstorms with localized severe weather is likely on Saturday in portions of the Dakotas, Nebraska and Minnesota. 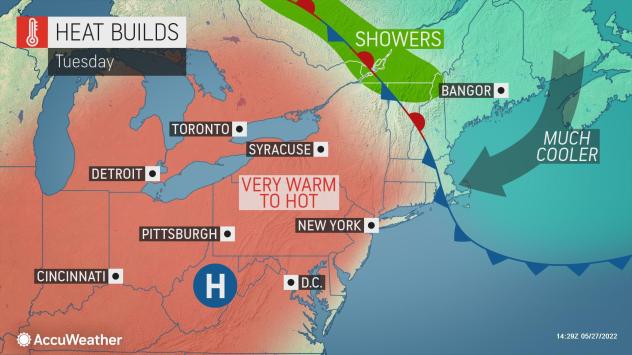 The same general area over the North Central states will be at risk on Sunday and Monday, but a slight southeastward shift is likely to bring storms into portions of Iowa, Wisconsin and Kansas.

Looking ahead for the mid-Atlantic and Northeast, the week after the unofficial start of summer is shaping up to be positively summerlike.

As the pattern evolves, the season's first official heat wave could unfold in parts of the Northeast next week, where some locations in the mid-Atlantic and central Appalachians could have three days in a row in which high temperatures are at or above 90 degrees.

Philadelphia is one such city that is forecast to reach 90 or higher from Tuesday through Thursday. There's a chance of the same in New York City, too. While temperatures may initially surge in New England as well, a back door cold front may dip in from the northeast and stop the heat in its tracks by midweek. The same front could disrupt the 90-degree string of days in New York City also, but at the very least, a taste of summer is on the way.