Even with all the lights on in Times Square, the streets of Manhattan are completely empty on March 25 as people are staying home due to the coronavirus.

Millions of Americans are growing stir crazy as coronavirus shelter-in-place measures have been in effect for a couple of weeks in parts of the Northeast -- and unfortunately, for those hoping to take a stroll or venture to the grocery store for essentials, the need to dodge raindrops will be the norm into this weekend.

For much of the central Appalachians and mid-Atlantic, Thursday will probably end up being the best day of the week for catching a few rays of sunshine and taking in fresh air through the weekend as more unsettled weather is on the way. 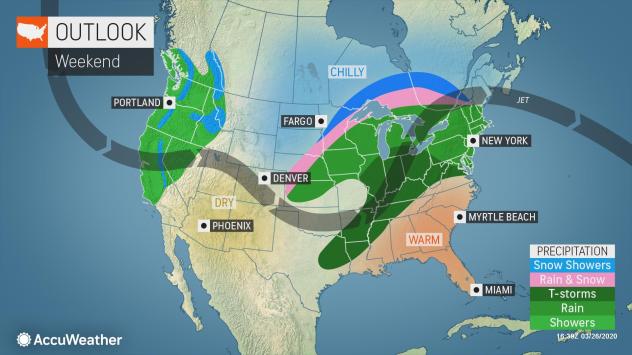 Those thinking of venturing outdoors during the less-rainy episodes should heed all restrictions set in place by local and state officials. All individuals are urged to avoid crowded areas and continue to practice social distancing, whether indoors or out. Officials and medical experts recommend that people sanitize their hands often, including when entering and leaving a store, even when carrying an umbrella becomes a necessity.

Forecasters monitoring several factors for potentially dangerous severe storm outbreak Flooding rainfall threatens Italy, Greece amid battle against coronavirus What infection rates in Iceland and Australia may reveal about how COVID-19 could spread in the US AccuWeather's 2020 Atlantic hurricane season forecast calls for 'above-normal' tropical activity

Even though cleaning up the yard is great exercise and perhaps a must this time of the year, spring brush and leaf collection may have been suspended in many communities. Check with township and municipalities before putting these items at the curb where they may again blow away in windy weather.

At least two more storm systems will affect the area from the Midwest to the Northeast through this weekend.

The next storm spread clouds and showers across the Ohio Valley and lower Great Lakes region on Thursday. This moisture will spread across the central Appalachians Thursday night and will dampen portions of the Interstate 95 corridor on Friday. 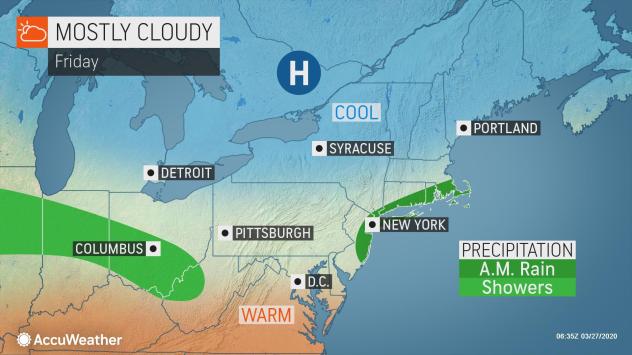 Some dry air will follow this feature, but it may not pack enough punch to clear out the rain, let alone dry out parts of the Appalachians and lower mid-Atlantic coast Friday night.

More rain will be on the heels of the Friday storm. As a large storm pivots across the Plains and Mississippi Valley with severe weather, a new area of rain will form over the Ohio Valley and lower Great Lakes region on Friday and then expand eastward during Saturday. 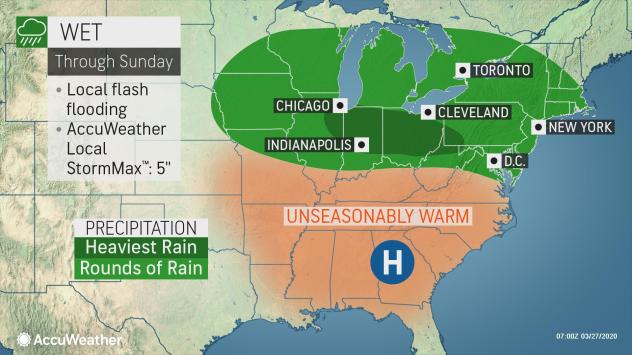 "While parts of the central Appalachians can get a thorough soaking from the storm this weekend, the greatest risk of urban and small stream flooding will be over the Interstate 70 and 80 corridors of the Midwest," AccuWeather Senior Meteorologist Brett Anderson said.

A general 1-2 inches of rain is forecast with an AccuWeather Local StormMax™ of 5 inches centered on the Ohio Valley.

One area that may miss out on some of the wet weather pattern will be at least part of New England. The storm on Wednesday was generally dipping south of the region. The storm on Friday is likely to do a similar maneuver. It may not be until Saturday night or Sunday before rain will spread over a large part of the region. But, even Sunday may not be a total washout along the immediate southern coast and farther to the northeast over Maine. 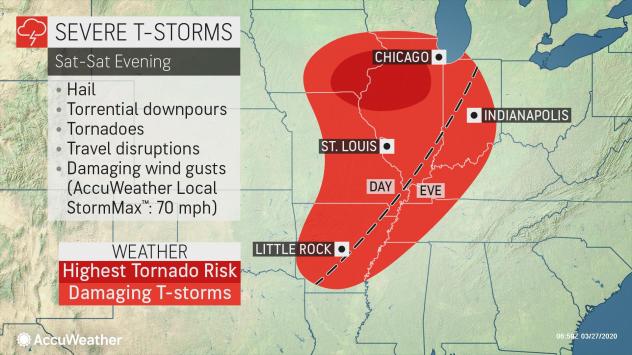 Since the storm over the Mississippi Valley is likely to strengthen, it may have enough energy to send heavy, gusty and locally severe storms eastward across Ohio, West Virginia, western Pennsylvania and western New York state late Saturday night to Sunday. People in the aforementioned areas should monitor the forecast in case severe weather bulletins are posted. 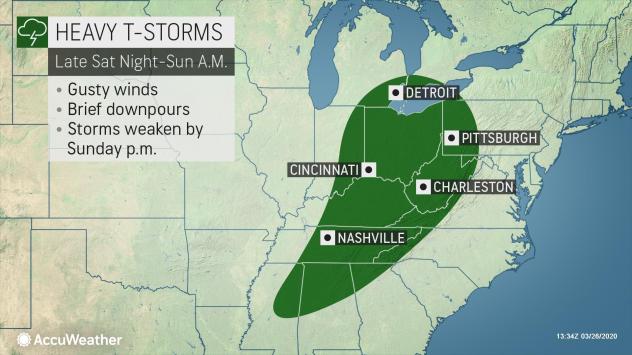 The approaching strong storm is also likely to kick up gusty winds in lieu of any thunderstorms from the central Appalachians to the eastern Great Lakes region from later Saturday to Sunday. Winds could get strong enough to break tree limbs and perhaps cause sporadic power outages.

This time of the year, sunshine can make all the difference between mild days and chilly ones. Even when a cool air mass is present that brings cold nighttime conditions, the late-March sun can work wonders. However, when clouds linger much of the day or when a wind is blowing off the Atlantic Ocean, the day can be not only gloomy but chilly as well.

So while New England may stay in a cool air mass into this weekend, when and where the sun is out the next few days, temperatures can be a tad above average. Temperatures are forecast to climb into the 50s F in Boston on Friday and Saturday with some sunshine, but they may be no better than the middle 40s on Sunday with the rain.

Meanwhile, the building warmth over the Southern states may poke northward at times over parts of the Ohio Valley and mid-Atlantic region. That southern air may be especially warm when and where the sun manages to burn through the clouds. In Charleston, West Virginia, temperatures are forecast to reach the middle 70s on Thursday and may hit 80 on Saturday.

Looking ahead to next week, the Northeast may again suffer a setback and dash hopes of Americans wishing for a long period of dry weather.

"A large and slow-moving storm traveling from the southern Plains to the New England coast during the middle and latter part of next week," Paul Pastelok, AccuWeather lead long-range meteorologist, said.

In addition to suppressing typical the spring warmup and limiting dry days for the Northeast next week, that storm has the potential to unleash heavy rainfall and possible flooding in the Southeast, due to its strength and slow movement.