TRICK-OR-TREAT FORECAST: What's in store across the country on Halloween.

Much-needed rain will fall in the Dakotas and into western Minnesota into Wednesday night, but too much rain could result in flash flooding concerns.

The same storm system that brought the first significant snow of the season to the Rocky Mountains to start the week has swung out onto the northern Plains as of Wednesday and will continue to unload areas of drenching rain that will alleviate ongoing drought concerns into Wednesday night.

In addition to heavy rain that will fall in the northern Plains into Wednesday night, strong winds will cause the rain to blow sideways at times.

"Winds will gust up to 40 to possibly even 60 mph in some locations in the northern Plains," said AccuWeather Meteorologist Rob Richards. 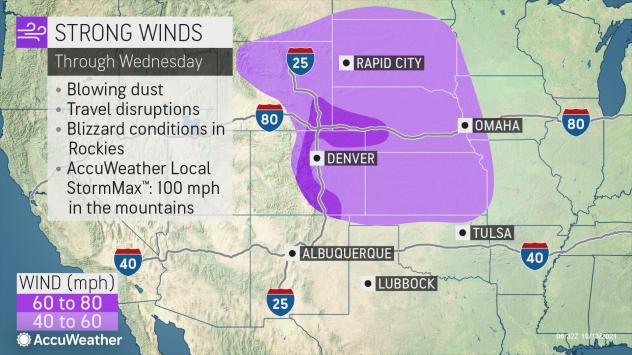 With portions of the northern Plains experiencing severe to extreme drought conditions according to the United States Drought Monitor, the rainfall will be beneficial overall. However, too much rain may fall too quickly and result in flooding.

There will be a few factors that create localized flooding. The ground is less porous than normal due to the current drought conditions. This will cause more of the water to runoff as opposed to being absorbed. The intensity of the rain and the rainfall amounts will also be a concern.

"Some locations in North Dakota and northwestern Minnesota will get 1-3 inches of rain, which can lead to localized flooding in low-lying and poor drainage areas," said Richards. 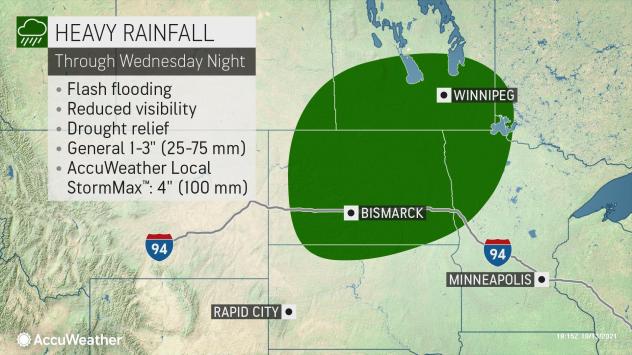 Some colder air in parts of the far western Dakotas could allow rain to mix with or change to snow, forecasters say.

The Dakotas and northern Minnesota won't be the only parts of the central U.S. to receive a bout of heavy rain into Wednesday night. 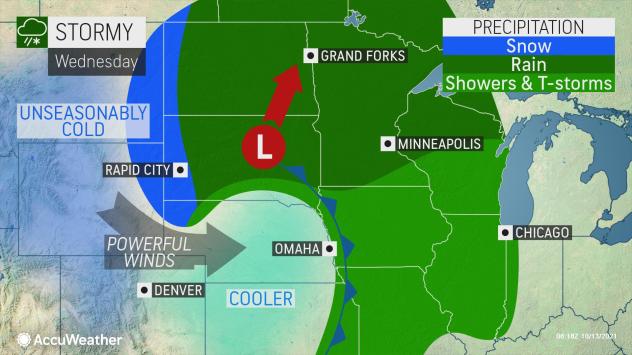 "Some thunderstorms that form along a cold front in eastern Iowa and Missouri will have the potential to produce brief, heavy downpours and gusty winds," said Richards.

Behind the rain and thunderstorms, a drier day is expected on Thursday with gradually diminishing winds. By this weekend, a familiar trend of above-normal temperatures will return, and the dry weather will continue.

Unlike the record-challenging heat from earlier in the month, temperatures will be about 5-10 degrees higher than average. No new record highs will be set this weekend, but the weather will make for a pleasant fall weekend, and it may be hard to find a cloud in the sky.

Halloween forecast: A trick or a treat? Depends where you are

Daily coronavirus briefing: COVID-19 cases on the rise in Europe What is dark energy?