The weather in Dallas this summer has been warm but not all that hot, which has resulted in Big D having not yet experienced a triple-digit temperature in 2021.

On average, Dallas experiences its first 100-degree day on July 1 and the city came close on that day this year, with the mercury topping out at 98 degrees. Dallas also flirted with the century mark a few other times this month, but AccuWeather forecasters say the city is likely to notch its first day of the year at 100 as the end of the month nears.

Triple-digit temperatures have been common across the northern Plains this summer as the region has endured multiple stifling heat waves. However, that hasn't been the case for states in the southern Plains.

This weekend, a heat dome is expected to build across the northern, central and southern Plains. This will mean Dallas and some other locations will soak up the first taste of true summer temperatures of the year.

Dallas is expected to hit 100 degrees on Monday, which would be 26 days behind the average pace. The average high for Dallas on July 26 is 97 degrees. Wichita Falls, Texas, is also forecast to reach the 100-degree mark. 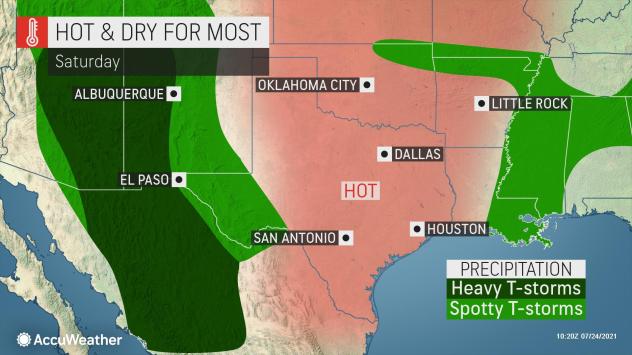 There has been quite a contrast from north to south in the Plains through June and July. For example, Bismarck, North Dakota, is averaging 8 degrees above normal since June 1. In addition, the city has reached 100 degrees or higher on nine days this year. This included readings of 106 degrees on June 4, 103 degrees on June 5, and 107 degrees on July 3, all of which set daily records. Another record was set on Thursday with a temperature of 105 degrees, breaking the record of 103 degrees from way back in 1901.

The heat in northern Plains can at least partially be attributed to the ongoing extreme to exceptional drought. When there is a drought, the sun's energy can go directly into heating the ground.

According to the United States Drought Monitor, drought is much less extensive across the central Plains and there are no drought conditions present in the southern Plains, where plenty of rain has fallen this spring and summer. The sun must first work to evaporate moisture in cases where the ground is saturated, and this has held temperatures back in the southern Plains.

As a disturbance moves westward away from the southern Plains, drier and warmer conditions will begin to take hold. 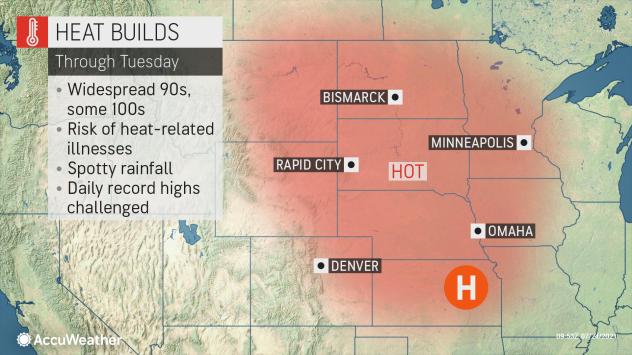 "A strong area of high pressure will strengthen in the upper levels of the atmosphere across the Plains this weekend into early next week, leading to the first heat wave of the year for parts of the central U.S." said AccuWeather Meteorologist Adam Sadvary. 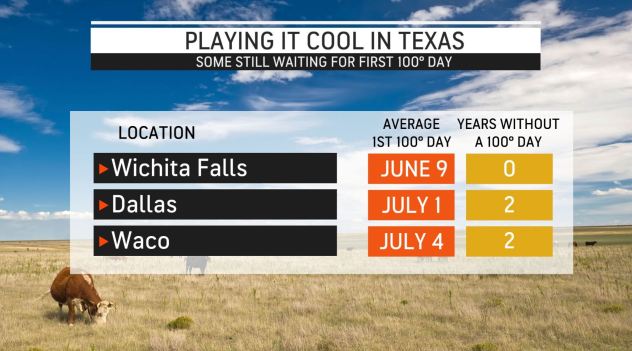 But even with the building heat, some places in Texas and to the immediate north may still fall short of the 100-degree mark.

In Waco, Texas, temperatures at or above 100 degrees are not expected. Monday will be a close call, however, with a forecast high of 99 degrees .

Oklahoma City is another location that has yet to reach 100 degrees, and the city is not likely to do so through at least early next week.

"Wichita, Kansas, has only had five days so far this month where the thermometer reached the 90s, but highs are forecast to be with a few degrees of 100 F on one or two days next week," Sadvary said.

The mercury is likely to reach between 95 and 98 degrees through Tuesday, so the lack of 100-degree temperatures is likely to continue. Through July 23, Wichita is 3.9 degrees below normal for the month.

By the middle of the week, higher temperatures are expected and the current forecast finally has the mercury reaching 100 degrees in Wichita on Wednesday. 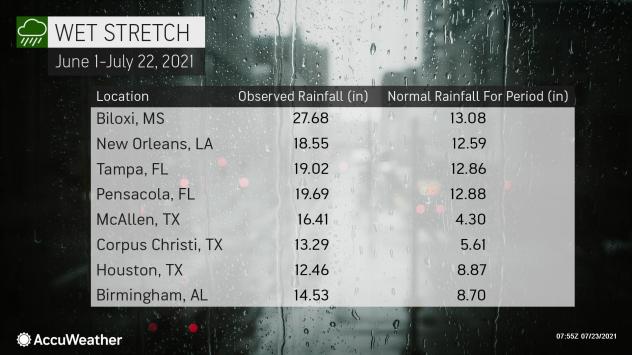 Wet weather has kept the ground saturated across the South, thus limiting temperatures from soaring into the triple digits across the southern Plains.

Meanwhile, farther north, the hot summer will continue. Cities such as Bismarck and Minot, North Dakota; and Pierre, South Dakota, are likely to add to their tally of 100-degree days. In fact, some of the highest temperatures of the year may be observed.

"By Monday, many areas in the Dakotas and Kansas could see temperatures reach the triple digits and a few spots in North Dakota may well approach 110 degrees Fahrenheit," Sadvary said.

A break in the heat is finally expected by late next week, with temperatures in the 80s and lower 90s forecast from North Dakota to Nebraska. Temperatures farther south may still be in the middle to upper 90s, but that is right around normal for late July.

How the Bootleg Fire is generating its own weather Space, weather come together for Friday night sky event 'We were just cooked': The heat wave that gripped the American heartland

Daily coronavirus briefing: Travelers to US may soon need vaccines Tropical Atlantic could soon wake up from doldrums Podcast: Signs of life in the tropics