AccuWeather meteorologists are concerned that dry thunderstorms could cause wildfires to ignite in the mountains of California through Thursday.

The combination of tropical moisture and an offshore storm will result in an uptick in thunderstorms across portions of California into Thursday. However, while a few of the storms could soak some communities, most of the storms will contain little or no rain and could lead to a surge in wildfires, AccuWeather meteorologists warn.

The western part of the United States in general is experiencing its driest period in at least 1,200 years, according to a recent peer-reviewed study published in the journal Nature Climate Change. The Golden State has been plagued by significant drought for much of the last decade, with at least eight of the past 10 years resulting in below-average rainfall. This has often led state and local officials to institute water restrictions in many towns and cities. Last month, state officials once again turned to water reactions to combat water shortages.

Nearly 98% of California was considered to be in severe drought or worse as of mid-June, based on the latest information from the U.S. Drought Monitor.

Numerous wildfires have already developed across the state this week. On Monday evening, a brush fire in Los Angeles' Hollywood Hills burned at least two acres near the famous Hollywood Sign landmark, with multiple aircraft from the Los Angeles Fire Department called to assist with containment. No evacuations were needed due to the fire.

On Tuesday, evacuations were ordered in Redwood City, California, just outside the metropolitan areas of Oakland and San Jose, due to fires in the city's Emerald Hills neighborhood. The evacuation order for what is known as the Edgewood Fire came with a note stating that there was an "immediate threat to life" as well as potential threats to local property. According to local officials, all evacuations were completed in the afternoon hours Tuesday.

More than 11,000 electrical consumers had power go out in the San Fransisco Bay Area in the aftermath of the inferno, with 25 acres burned as of approximately 6 p.m. PDT Tuesday evening. One firefighter was injured trying to contain the blaze, and was transported to a local hospital via ambulance. The firefighter remains in unknown condition. At least four aircraft joined the fight against the Edgewood Fire, but the blaze remained at 0% containment as of 6 p.m. PDT Tuesday. 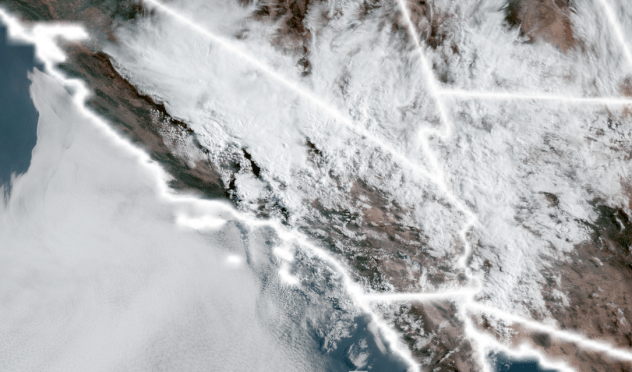 Tall, bubbly clouds capable of casting shadows were evident over California on Wednesday, June 22, 2022. The clouds were producing showers and thunderstorms over the southwestern United States. (GOES-West/NOAA)

“AccuWeather meteorologists are increasingly concerned about the risk for dry thunderstorms to develop across parts of California on Wednesday and Thursday as a surge of mid-level atmospheric moisture arrives along with a jet stream disturbance," AccuWeather Chief Meteorologist Jonathan Porter said on Tuesday.

Porter noted that this is the type of set up that in the past has resulted in a significant number of lightning strikes. Given the dry ground -- and the dry air near the ground due to the serious drought situation over recent years, most rain has a tendency to evaporate before it reaches the ground so we are left with a scenario where there can be considerable lightning and little rainfall in some areas, and that can be a significant concern for sparking new wildfires.

The largest wildfire in California history, the August Complex Fire, burned more than 1 million acres after it ignited due to lightning in August 2020. That blaze destroyed more than 900 structures across seven counties and left 1 dead.

The current risk bears some similarities to the 2020 situation, according to Porter.

“In that circumstance, there was a deeper supply of tropical moisture originating from the eastern Pacific, surging north into California. We don’t have that same supply of copious mid-level moisture, but there may be just enough moisture and lift to produce thunderstorms that could pose a serious risk for many fires to be sparked in the coming days and even a week or more out,” he said, “Sometimes lightning can strike a tree, for example, and the tree can smolder for a time until gusty winds produce conditions that can lead to fire spread.”

During a 10-hour period starting at midnight and ending at 10 a.m. PDT Wednesday, over 3,500 lightning bolts were detected across California. Some, but not all, of these bolts reached the ground with more lightning strikes possible into Thursday.

Opportunities for rainfall during the dry season, which spans from the spring through the summer and early autumn, are scarce. Average rainfall for Downtown Los Angeles during the period from June 1 to Sept. 30 is less than 0.25 of an inch. Across the Sierra Nevada, the average rainfall is 1-2 inches during the same four-month period.

As anticipated, the showers and thunderstorms that erupted across the central and southern portions of California into Thursday morning generally brought a few hundredths of an inch or less to most locations. Most of the rain fell over the mountains or was scattered across the deserts. Lancaster, located 50 miles northeast of downtown Los Angeles, picked up just over 0.50 of an inch of rain through Wednesday morning with Mohave receiving 0.42 of an inch and Edward Air Force Base picking up 0.36 of an inch. Long Beach managed a light soaking with 0.11 of an inch, but only a few drops of rain to 0.01 of an inch fell around Los Angeles as well as Las Vegas.

The opportunities for rain will decline for areas farther east into Nevada, Arizona, Utah, Colorado and New Mexico from Thursday to Friday.

Farther to the east, over the past several days, southerly breezes have kicked in over the interior Southwest. This change in the wind direction from the west to the south is known as the North American monsoon. The uptick in moisture has unleashed numerous showers and thunderstorms in part of the region.

Downpours have been occurring over the past few days in New Mexico, and that will go a long way in aiding firefighting efforts. With not quite half of 2022 in the books, more than 864,000 acres have burned in New Mexico alone, compared to an average of 270,000 acres that typically catch fire over the entire year, according to the Southwestern U.S. Coordination Center. As of June 20, wildfires have consumed about 17,000 acres in California.

In recent months, California has been spared from some of the worst wildfires in the Southwest, with massive fires raging in New Mexico and Arizona.

The chance for minimal rainfall in California has evolved from a different weather-maker than the monsoon pattern. "A weak storm that dropped southward off the Pacific coast allowed some moisture from Tropical Rainstorm Blas to be pulled northward," AccuWeather Senior Meteorologist Heather Zehr said. 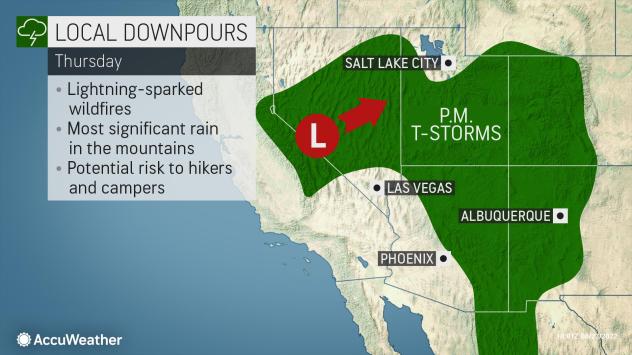 Blas was once a Category 1 hurricane that spun off the coast of Mexico earlier in June and lost its wind energy this past weekend. The former hurricane diminished to a patch of clouds and showers over the Pacific near Baja California, Mexico, on Monday.

"A few of the thunderstorms that spring up from the uptick in humidity can bring brief downpours, but there will be a risk for multiple lightning strikes away from the rainfall, where sparks can cause wildfires to ignite," Zehr said.

Dry vegetation can easily ignite where downpours do not immediately occur, according to AccuWeather meteorologists.

Vegetation is much drier than average for this time of the year as most of the winter rain and mountain snow totals were much less than average. While December brought bountiful rain and snow to the northern part of California, precipitation was not as substantial farther south. Storms were almost non-existent during the rest of the winter and rain and mountain snow events were hard to come by in the spring. 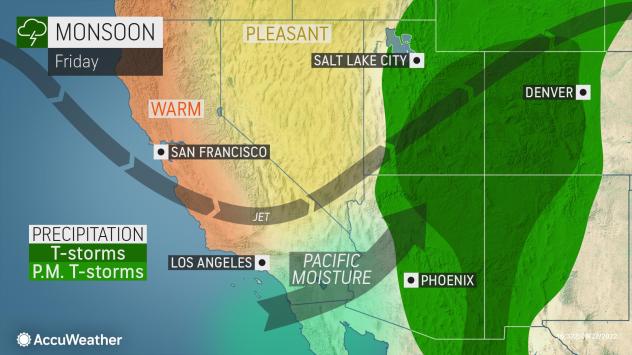 Along with the likelihood of wildfires igniting during the sporadic thunderstorm activity, some cases of blowing dust can substantially reduce visibility for motorists. In rare cases, enough rain can pour down quickly enough to lead to flash flooding and debris flows. These risks will be most likely in urban areas and recent burn scar locations.

Motorists should allow for extra stopping distance and reduce their speed during any rainfall as the combination of water and buildup of oil on the roads can make for extra slick conditions, experts say.

Forecasters urge hikers to keep an eye out for rapidly changing weather conditions and to get off exposed ridges which are often targets for lightning. Similarly, hikers and cyclists should avoid normally dry stream beds that could rapidly fill with water from downpours miles away.

The pattern responsible for the spotty thunderstorm activity will break down at the end of the week, and any moisture is likely to spread to the east and north.

Epic alignment of 5 planets, moon to peak after summer solstice