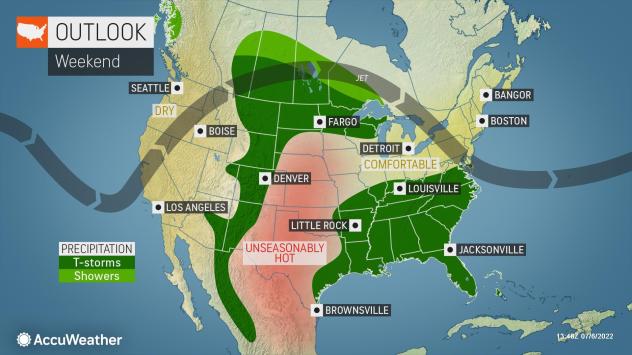 July is typically the hottest month of the year in much of the United States, but AccuWeather meteorologists say that some locations will get a temporary break from the heat this weekend into early next week.

A 'heat dome' has been in place for much of the month so far in the Ohio Valley and into the Southeast. Underneath a heat dome, sinking air causes temperatures to climb and precipitation and cloud cover to be limited.

During a month that is already hot, temperatures have been running well above normal. Indianapolis is nearly 7 degrees above normal through the first seven days of July. All but two of those days have had an observed high temperature over 90 degrees Fahrenheit, including a high of 99 degrees on July 5. Typically, temperatures in Indianapolis top out around 85 F on July afternoons.

In addition, a mere 0.14 of an inch of rain has fallen. When there is little to no moisture in the ground, the sun's energy can go directly into heating the earth and does not need to evaporate water, promoting above-normal temperatures.

The pattern that has been in place for late June and early July is forecast to change before the start of the weekend.

"Starting late this week, there will be a shift in the heat dome farther west over the interior Southwest," said AccuWeather Lead Long-Range Expert Paul Pastelok. 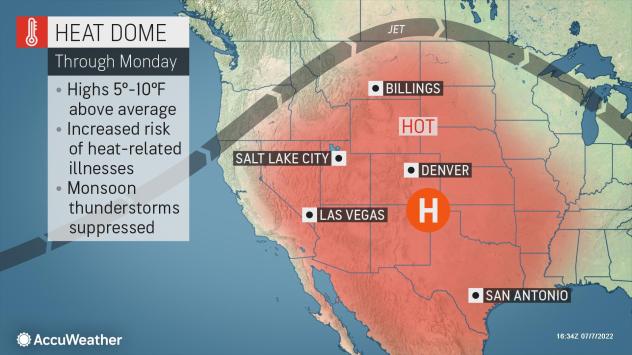 This change will be caused by a change in the configuration of the jet stream.

"The jet stream is normally farther north in July, but a dip will allow a cold front to slip into the Southeast with cooler and drier air to the north," explained AccuWeather Senior Meteorologist Matt Rinde.

The commonplace 90s will be replaced by 80s in the Ohio Valley from Friday through the weekend. Some locations in northern portions of Minnesota, Wisconsin and Michigan may even fail to get out of the 70s.

Not only will the days be cooler, but there will be an effect on overnight lows. Widespread 50s are likely, especially Saturday night, helping residents save on overnight cooling costs.

It will take until later in the weekend for the cool and dry air to reach the Southeast. This will occur as high pressure from the north pushes the cold front nearly all the way to the Gulf Coast, unusually far south for July.

The arrival of the cooler air will be accompanied by showers and thunderstorms that could put a damper on weekend plans. However, the rain is much-needed with most of the region experiencing some short-term drought conditions, according to the U.S. Drought Monitor. 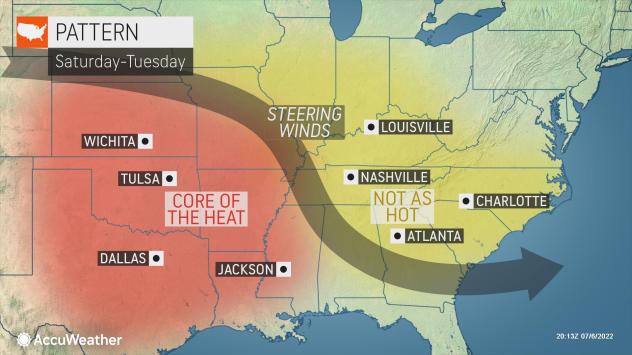 In the Southeast, normal highs are in the 90s. Therefore, temperatures only reaching the lower to middle 80s by Sunday will be a welcome treat for folks looking for a small break in the heat.

Raleigh, North Carolina, typically has a high of 91 degrees in July. However, each day so far this month has been at least 94 degrees. This included a record-tying 102 degrees on July 6 and July 7. By Sunday, it will feel comparatively cool with a high of just 82 degrees expected.

Neither the humidity nor the overnight temperatures will get as low as areas farther to the north, but it will be a brief break from the summertime heat before the cooldown comes to an end.

"Residents should not get used to the more comfortable conditions, as warmer and more humid air will return next week," said Rinde.

By the middle of next week, locations across the Southeast will be back into the 90s. Meanwhile, another cold front may sweep across the Ohio Valley by the middle of the week, extending the break in the heat and humidity.

Northwest bakes under another heat wave