Water levels at the iconic Utah lake hit a historic low this week and drone video illustrates why one official remarked that "it's clear the lake is in trouble."

Twitter user @Grallon shared drone video of pilings stretching for about a mile out towards the edge of the Great Salt Lake in Utah. At one time, they were underwater.

Water levels at Utah's Great Salt Lake reached a new historic low on Sunday, and officials project levels will continue to drop for the next few months. New drone footage shot by a Utah resident shows in stark detail just how dire the situation at the iconic lake has become amid the ongoing megadrought.

On July 3, the lake's average daily surface water elevation was measured as 4,190.1 feet at the U.S. Geological Survey gauge at Saltair Boat Harbor on the southern end of the lake. Last year, on July 23, the same gauge recorded the average daily level of 4191.3 feet, and the water level continued to plunge to 4,190.2 feet by late October.

Officials believe that the lake levels this year will also continue to plunge until fall or early winter when storms roll in and agricultural irrigation ends for the season. The persistent drought in the West, exacerbated by climate change, as well as water diversions from the Bear River Watershed have long contributed to its depletion. 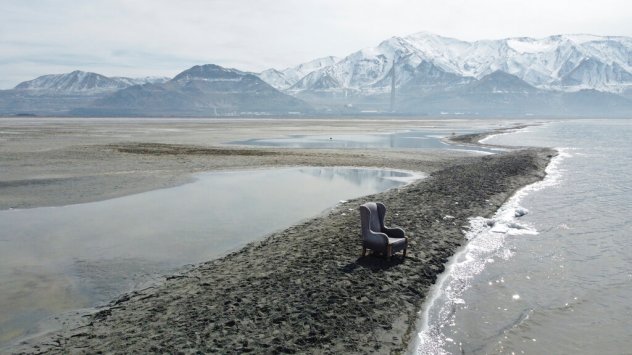 FILE - A chair sits on an exposed sand bar on the southern shore of the Great Salt Lake on March 3, 2022, near Salt Lake City. The Great Salt Lake has hit a new historic low for the second time in less than a year. Utah Department of Natural Resources said Monday, June 5, 2022, in a news release, the lake dipped Sunday to 4,190.1 feet. (AP Photo/Rick Bowmer, File)

"This is not the type of record we like to break," Utah Department of Natural Resources executive director Joel Ferry said in a joint news release from the USGS and the Utah Department of Natural Resources. "Urgent action is needed to help protect and preserve this critical resource. It's clear the lake is in trouble. We recognize more action and resources are needed, and we are actively working with the many stakeholders who value the lake."

Scott Taylor of Magna, Utah, which is just southeast of the lake and on the outskirts of Salt Lake City, shot some drone footage this week that puts into perspective just how much the body of water has dried up in recent years.

"The lake is in terrible shape," Taylor, 62, told AccuWeather. "Over the past few years, I have seen the water [level] fall dramatically." He's lived near the Great Salt Lake for 30 years and has been astonished by the view his drone has provided in recent years.

Taylor's video shows a series of pilings sticking out of dried earth, pilings that were, decades ago, part of a now-defunct lake resort called Saltair. The pilings at one time were all underwater -- and now, as Taylor's video shows, they can be seen protruding from the exposed lakebed for about a mile right up to the water's edge.

The location of Saltair is shown at the 'X' in this satellite animation from 1984 to 2020 via Google Earth.

The footage is just the latest imagery illustrating the Great Salt Lake's demise.

In 2021, the lake's shrinking water levels prompted The Salt Lake Tribune, one of America's oldest continuously published newspapers west of the Mississippi River, to ask AccuWeather mapmakers, with whom the paper partners, to redraw the lake.

"Our maps stay the same for the average level of the lake, and as a news organization, it doesn't make sense anymore," Grant Burningham, the managing editor of The Salt Lake Tribune, told AccuWeather National Weather Reporter Bill Wadell late last year.

With the lake about half the size it used to be, the newsroom made the call in order to raise awareness around just how much the lake has changed in recent years and also to more accurately depict the lake's current state.

A "death spiral" was how Burningham had described the state of the lake, which is in turn connected to the area's ecosystem and economy. 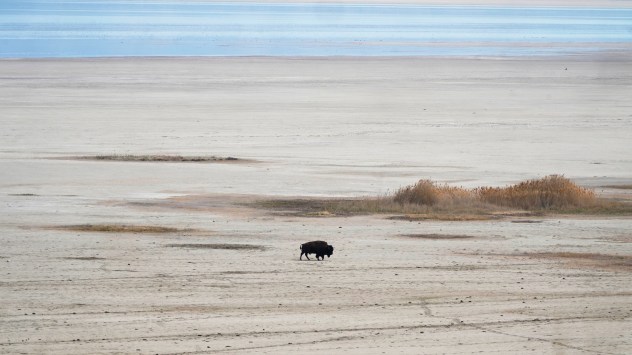 A lone bison walks along the receding edge of the Great Salt Lake on his way to a watering hole on April 30, 2021, at Antelope Island, Utah. (AP Photo/Rick Bowmer)

Should the Great Salt Lake continue to dry up, a state assessment from 2019 found the economic toll to Utah could span from $1.69 billion to $2.17 billion per year and result in over 6,500 job losses. Over the course of 20 years, these costs could be as high as $25.4 billion to $32.6 billion, the assessment emphasizes.

The lake contributes an estimated $1.32 billion to Utah's annual economy, according to a 2012 report that the assessment references. However, this estimate is in 2010 dollars. When adjusted for inflation, the estimate would equate to at least $1.77 billion.

The health of the nearly 3 million people who live around the Great Salt Lake will also be impacted, with exposed lakebed dust containing levels of arsenic.

"Every single measurement that I took out on the Great Salt Lake had higher arsenic concentrations than would be recommended by the Environmental Protection Agency," Kevin Perry, an associate professor in the Department of Atmospheric Sciences at the University of Utah who has studied the impacts on the lake, told Wadell in 2021. To answer the question of just what was in the dust, he biked out to collect samples every 500 meters across the exposed lakebed.

Even if the dust didn't contain arsenic, the combination of wind and dust would still pose a health hazard if the concentration was high enough, Perry added. 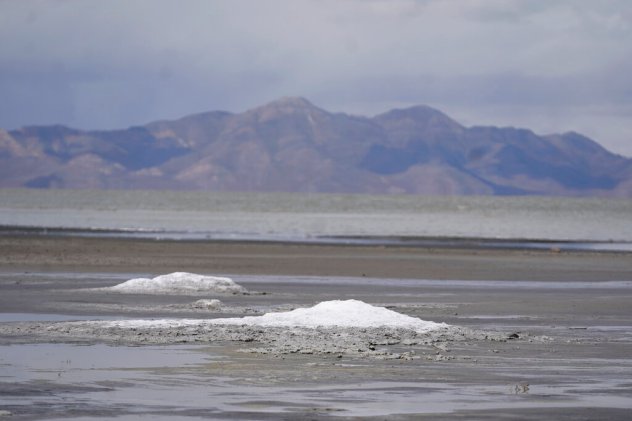 FILE - Mirabilite spring mounds are shown at the Great Salt Lake on May 3, 2022, near Salt Lake City. The Great Salt Lake has hit a new historic low for the second time in less than a year. Utah Department of Natural Resources said Monday, June 5, 2022, in a news release, the lake dipped Sunday to 4,190.1 feet. (AP Photo/Rick Bowmer, Pool, File)

Earlier this year, lawmakers in Utah, desperate for a solution to the worsening problem, voted to commission a study on the feasibility of piping in water from the Pacific Ocean to replenish the Great Salt Lake.

“Dire times call for dire measures,” Utah Representative Carl Albrecht said at the time, according to a report by KUTV. “Water’s going to become pretty valuable for drinking, sewer, and irrigation. We run pipelines all over this country full of gas and oil and whatever.”

For Taylor, the longtime resident who shot the drone footage, urgency is top of mind. "Something needs to be done soon," Taylor said. "Or the lake will be a hazard more than a good thing."

Meanwhile, other lakes and reservoirs across the West have also suffered the consequences of harsh drought and water diversions.

In late June, water levels at Lake Mead, a reservoir formed by the Hoover Dam that sits between Arizona and Nevada, reached the lowest point since the lake was filled in the 1930s. The reservoir is the nation's largest by volume.

Lake Mead and its declining water levels gained national attention after the federal government formally declared a water shortage in August 2021 for the first time since its construction. From June 2021 to June 2022, the water levels at the reservoir dropped an additional 26 feet, and water levels are projected to continue to drop until the wet season begins in November, according to the Bureau of Reclamation. 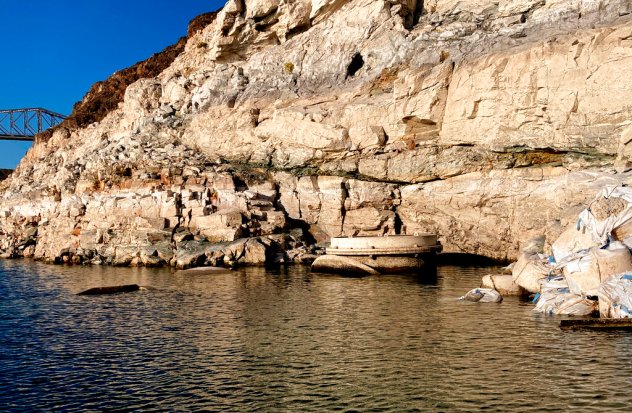 This photo taken Monday, April 25, 2022, by the Southern Nevada Water Authority shows the top of Lake Mead drinking water Intake No. 1 above the surface level of the Colorado River reservoir behind Hoover Dam. The intake is the uppermost of three in the deep, drought-stricken lake that provides Las Vegas with 90% of its drinking water supply. (Southern Nevada Water Authority via AP)

The Higgins landing craft that once sat 185 feet below the surface is now nearly halfway out of the water less than a mile from Lake Mead Marina and Hemingway Harbor, The Associated Press reported.

While over 1,000 of these crafts were deployed at the Battle of Normandy on June 6, 1944, or D-Day, this boat had once been used to survey the Colorado River. It was sold to the marina before sinking, the dive tours company Las Vegas Scuba told the AP.