Blistering heat wave to ramp up in southwestern, central US as July progresses

In today’s Daily Dose of Sunshine, Dr. E. talks about the difficult decisions the pandemic is forcing people to make regarding summer vacations.

Meteorologists warn that ongoing heat and drought in portions of the Southwest and Plains states are likely to get worse, while intermittent heat and rounds of thunderstorms are forecast for portions of the Midwest and Northeast for the middle of July.

The main jet stream, a ribbon of high-speed air at the level of the atmosphere where jets cruise, was located along the northern tier of the United States with southward dips in the Northwest and Northeast at the start of July.

The jet stream is forecast to flatten out briefly and allow some heat from the Southwest and Plains to push into the East for a time early this week. 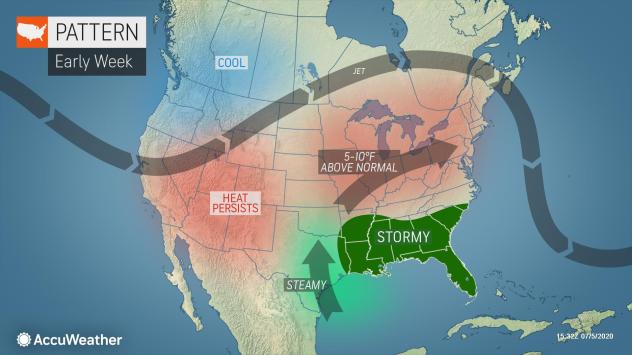 Moving forward into the middle of July, the jet stream is forecast to change shape in such a way as to cause a large northward bulge over the Southwest.

This forecast setup produces what is called a high pressure area at most levels of the atmosphere. During the summer, similar patterns have resulted in day after day of blistering heat and sunshine with little to no rainfall. 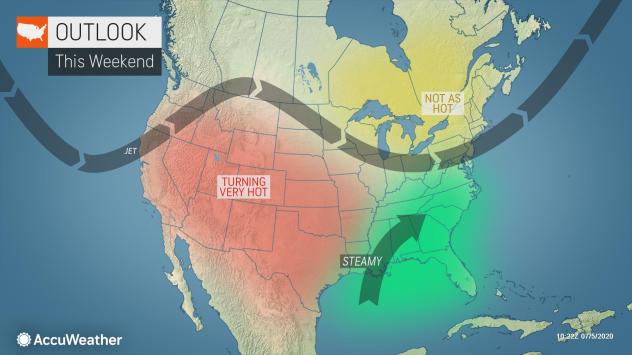 Even though July is typically the hottest month of the year for much of the nation, the pattern is expected to be centered over a region that has already had little or no rainfall in recent weeks and is already experiencing widespread abnormally dry soil conditions to extreme drought.

Areas across some Plains states rely on large complexes of thunderstorms to fill reservoirs and water crops. These have occurred, but they have been very sparse and generally limited to the northern half of the Plains with still parts of the northern half still missing out on regular rounds of rainfall.

Dryness tends to breed heat since more of the sun's energy is used to heat the ground and lower part of the atmosphere instead of evaporating moisture. The result is above-average temperatures. 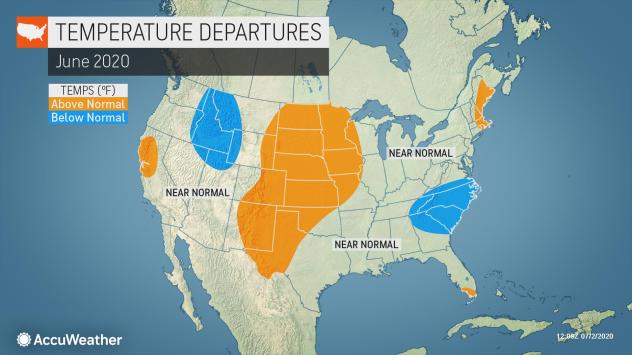 "In the pattern for the middle part of July, we expect routine highs in the middle 90s to near 100 F for much of the High Plains and eastern slopes of the Rockies, including Denver," according to Meteorologist Tyler Roys, who is a member of AccuWeather's Long-Range Team.

"As the pattern evolves, highs in the low 100s could be routine for the High Plains region, especially the southern half," Roys added.

Despite the strength of the jet stream and the high pressure system in the Southwest, a small amount of moisture from Mexico will filter in that is associated with the North American monsoon. 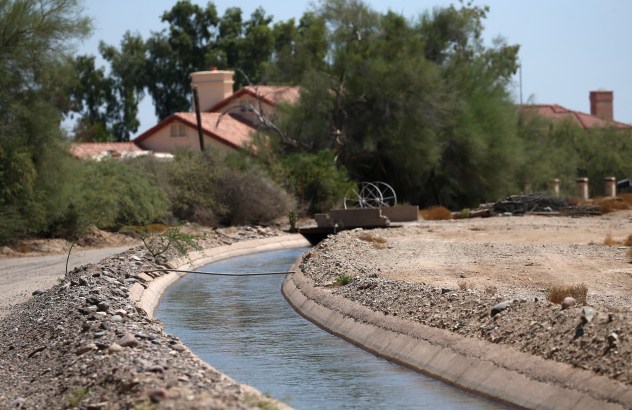 Only sparse thunderstorm activity is likely over the Southwest and Rockies in the pattern in the coming weeks. While a couple of spots may get a heavy enough downpour to cause flash flooding and debris flows in burn scar locations, the main effect of the thunderstorms may be to produce dry lightning that can spark more wildfires. 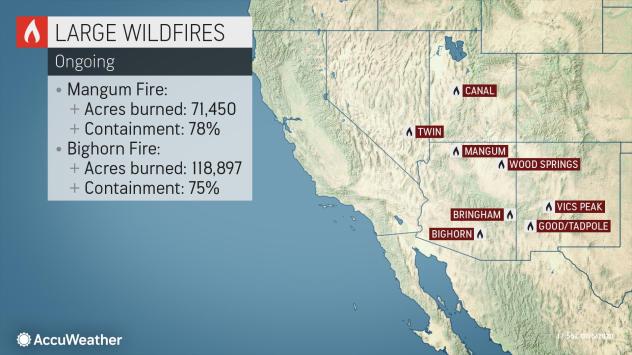 "We have concern for the wheat crop in the Plains as July is an important month for growing mature plants," Roys said.

Slightly less acreage of wheat was planted in 2020, according to the United States Department of Agriculture. 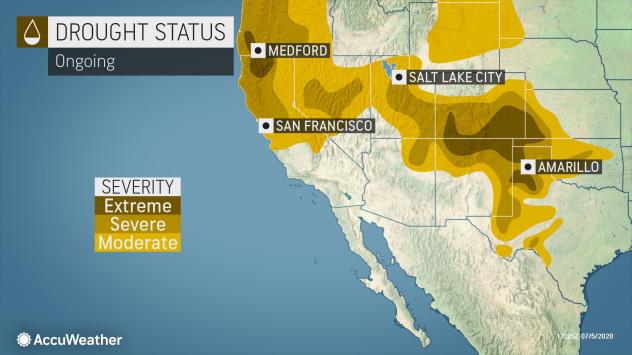 "Even though wheat requires less moisture to grow and mature, the anticipated worsening drought could result in reduced yields in central and southern areas of the Plains," Roys explained.

Farther to the east, in the corn belt of the Midwest and the Mississippi Valley area of the central and northern Plains, more corn was planted than last year, which should help end-of-season yields. However, pockets of dryness can become a problem.

"We still have concern for some areas in the corn belt since in a pattern such as this there are still areas that miss out on thunderstorms time and time again, which could stunt growth," according to AccuWeather Lead Long-Range Meteorologist Paul Pastelok.

Many areas in the corn belt will manage to capture enough rain to be unaffected by the hot weather.

"How long and how extensive the hot, dry weather is during July will determine how serious or not the situation becomes," according to AccuWeather Senior Meteorologist Dan Kottlowski.

Kottlowski, an Indiana native who grew up on a farm, said, "farmers, in general, are pretty resilient and can handle weather conditions within reason and tend to bounce back quickly."

From the eastern half of the Midwest to the Eastern Seaboard, an overall southward dip in the jet stream is forecast for the middle part of July.

There will be rounds of heat where temperatures can surge well into the 90s on a number of days in cities such as Chicago, Minneapolis and St. Louis as July progresses.

While intrusions of heat are likely to extend from the Midwest to the Northeast in the mid-July pattern, with highs on some days surging into the 90s, there will be a number of days with highs in the more typical range in the 80s. These cycling temperature conditions are expected in cities such as Washington, D.C., Pittsburgh, Philadelphia and New York City.

The intrusions of heat in the Midwest and Northeast are likely to be broken up by home-grown, pop-up thunderstorms related to slightly cooler air at the jet stream level, but also another phenomenon: large complexes of thunderstorms that can travel hundreds of miles over a span of a couple of days.

"This pattern we have coming up for the middle part of July is conducive for derechos on the rim of the heat from the northern Plains to the Midwest and parts of the East," according to AccuWeather Storm Chaser Blake Naftel. 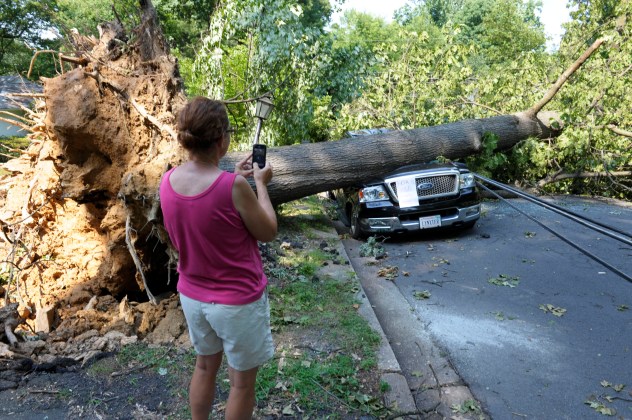 A woman makes a photograph of a man's pick-up truck as it lies under a fallen tree in front of his house after a long-lived severe thunderstorm complex swept through Falls Church, Va., Saturday, June 30, 2012. (AP Photo/Cliff Owen)

Derechos are long-lived complexes of thunderstorms that can bring damaging wind gusts and hurricanelike rain conditions along a path ranging from 250 to 400 miles or more.

AccuWeather will continue to pursue developing stories with the anticipated weather for July.

"With many people taking to the road in RVs and going camping as their vacation for the first time, given the ongoing coronavirus pandemic, monitoring severe weather and areas of critical fire danger are more important than ever," Pastelok added.