Once stuck in the throes of drought like much of the West, the Pacific Northwest has recently had the opposite problem -- too much rain. And more is on the way this week, forecasters say.

Another series of storms will target the hard-hit Northwest into the weekend.

Most of the western United States remains in the throes of severe or exceptional drought, but one notable exception is the Pacific Northwest. In fact, the region has received too much rain recently and AccuWeather forecasters say that trend will continue for at least several more days.

Following a very dry summer in much of the Pacific Northwest, a complete turnaround has occurred over the past couple of months. The rain was needed given the drought that was gripping the region, but the precipitation has been excessive. An atmospheric river led to major flooding and washed out roads last week in Washington state and British Columbia and another is on the way.

Although September and October were above normal in terms of rainfall, November has been especially wet.

"Seattle has recorded a whopping 8.42 inches of rainfall so far in November, which is 167% of normal through Nov. 24," said AccuWeather Meteorologist Alyssa Smithmyer.

Through the first 24 days of the month, measurable rain has fallen on 20 of those days in Seattle. A break in the rain occurred Wednesday with only very light rain on Wednesday evening but, yet again, the relatively dry weather will not last. 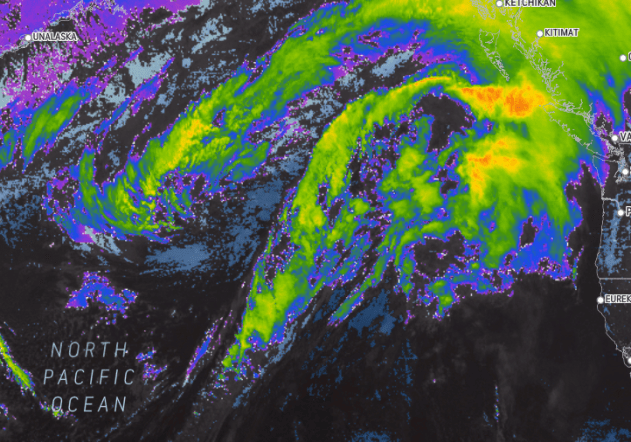 A river of moisture can be seen over the North Pacific Ocean on AccuWeather’s RealVue™ Enhanced satellite on Nov. 24, 2021.

The heaviest rain is expected to be focused west of Seattle in northwestern Washington and in coastal sections of southwestern British Columbia. Similar to Washington, portions of British Columbia received excessive rainfall and significant flooding just last week.

"Significant travel delays as a result of closed roadways, mudslides and washed-out bridges impacted the region after a swath of moisture shifted over the [Northwest] the previous week," noted Smithmyer.

Similar to the last atmospheric river event, the air this week will be very warm. This will add to the flood risk with heavy rain falling even in the high elevations, causing snow to melt.

Rain should come to an end later Friday or Friday evening, but the next car in the storm train will be coming ashore in the Northwest Saturday. This time, however, the focus will be farther north.

"A second round of rainfall is expected in coastal British Columbia through this weekend," said Smithmyer.

Any additional rain can exacerbate ongoing flooding and slow the receding of rivers. In some of the heaviest rain, rivers may even rise again. Only the highest elevations in British Columbia will receive snow, as most of the precipitation will fall as rain. 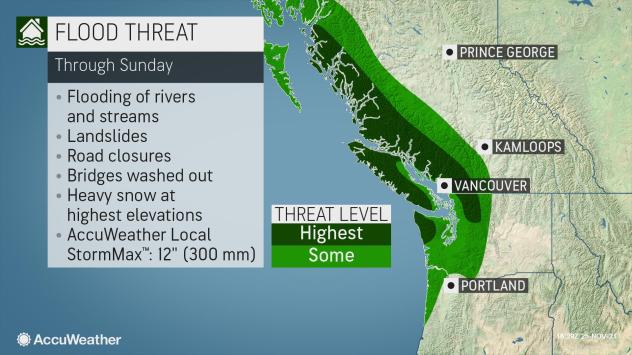 It appears that heavy precipitation will continue in southwestern British Columbia right through early next week. Forecasters say there is some question as to how far south any rain will get into the U.S.

Regardless of how far south precipitation reaches during the early and middle part of next week, a pattern change is expected. It appears that a much drier regime is in store as December arrives. While this is unfortunate news for areas of the West still dealing with drought, a much-needed and prolonged break in the precipitation is expected for at least the first several days of the new month in southern British Columbia and parts of waterlogged Washington.