It may not feel like it everywhere just yet due to the polar vortex overstaying its welcome in northwestern parts of Canada, but the change to spring is just about a month away. Astronomical spring officially begins at the equinox, which will occur at 5:37 a.m. EDT on March 20, 2021. For those counting down to the seasonal transition, meteorological spring will arrive even sooner, since it begins on the first day of March each year.

AccuWeather long-range forecasters, including veteran meteorologist Brett Anderson, released the Canada spring forecast this week. A La Niña phenomenon, which is marked by cooler-than-normal waters in the tropical Pacific Ocean, will carry over from the winter months into the spring.

Anderson explained that the global pattern will be a driving force behind spring weather across the country, and, in particular, will influence two active storm tracks that will keep opposite ends of the nation stormy during spring. An active northern branch of the jet stream -- typical during a La Niña -- will help to stir storms across the country. Meanwhile, one region that missed out on winter precipitation could face worsening drought conditions as spring progresses.

Extended ski season in the West

One area of the country may face an extension of stormy weather that began during winter. "An active storm track is likely to persist into British Columbia through April," Anderson said. It is not unusual for stormy weather to linger across western Canada into spring as the storm track across North America begins to lift north. 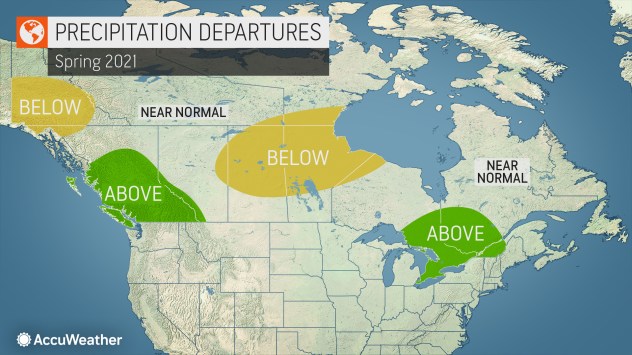 This active pattern across western Canada can bring bouts of heavy, coastal rain as well as a prolonged snow season in the Coastal Range and into the Rocky Mountains.

Temperatures across most of British Columbia and into Alberta are expected to remain below normal for the season as rounds of storms can delay the onset of sustained spring warming.

This may be a welcome pattern for skiers and snowboarders in western Canada trying to hit the slopes in the Coastal Range as well as the Canadian Rockies, including Whistler Blackcomb, one of the largest ski resorts in North America.

However, this pattern may cause trouble later in the season, Anderson warned.

"The result of this expected weather pattern will be above-normal snowpack and river levels that may lead to a higher-than-usual threat for spring flooding due to excessive runoff and ice jams in British Columbia and western Alberta by late spring and into early summer," Anderson explained. He added that this comes after spring flooding caused major headaches for some communities last year.

Thousands were forced to evacuate in Fort McMurray, Alberta, after an ice jam caused rivers to burst their banks, sending floodwaters into the town at the end of April 2020.

Drought to worsen in the Prairies

Drier-than-normal weather in recent months in south-central Canada has gradually caused moderate to severe drought conditions across much of southeastern Saskatchewan, southern Manitoba and extreme northwestern Ontario. Anderson said that this trend may continue into the spring.

A more tranquil weather pattern is likely to unfold during March, April and May as the jet stream dips south, forcing storms into the central United States and bypassing the south-central parts of Canada. Near- to below-normal precipitation is expected throughout the season.

This after a lack of snowfall across the Canadian Prairies during the winter has led to a below-normal snowpack. During December, January and through the middle of February, Regina, Edmonton and Winnipeg have all received below-average snowfall -- 19.3 cm (7.6 inches), 22 cm (8.7 inches) and 34 cm (13.5 inches) of snow, respectively.

Over the course of a normal winter, Regina and Edmonton report about 51 cm (20 inches) of snow, while Winnipeg will receive about 58 cm (23 inches) of snow.

According to Anderson, the combination of these factors and less water frozen in the sub-surface soil in February, compared to the amount during the winter of 2019-20, will keep the risk for extreme spring flooding below average this year.

"However, it is still very early and conditions can change quickly in early spring, thus additional updates on the spring flood risk are likely through the season," Anderson said.

Even though the concern for flooding may be lower than in recent years, the region won't be out of the woods for all springtime weather dangers. The ongoing drought may increase the wildfire risk late in the spring and into the summer, especially from southern Saskatchewan to southwestern Manitoba.

"It is still too early to determine whether or not this will be an extreme year in terms of wildfires across northwestern Canada," said Anderson, adding that if fires do develop, there is potential for air quality issues depending on the exact weather pattern and location of fires.

Warm and unsettled in the East

As stormy conditions set up over western Canada, a secondary storm track will develop over the Great Lakes and eastern Canada.

"This pattern will lead to above-normal precipitation and the risk for significant, early-spring snowfall over northern and central Ontario as well as into Quebec," Anderson said.

There is an average risk for severe flooding across Ontario and Quebec this spring due to the high frequency of storms that are expected to impact the region. However, the flooding risk may not emerge until later in the spring, since the winter was drier than normal. 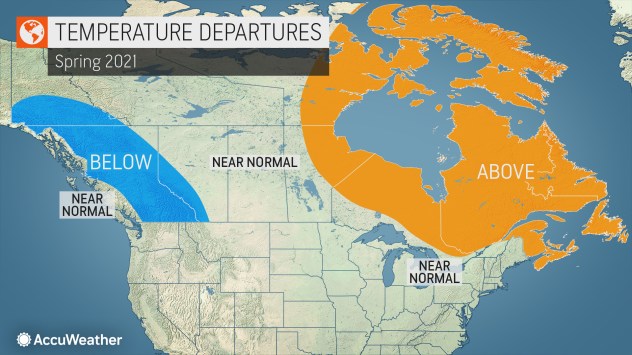 The first few storms of the season will help to add moisture back into the soil across the region. Once this soil becomes saturated, the risk of flash flooding can increase with each passing storm.

"There can be an elevated risk for ice jam flooding in eastern Canada, especially in New Brunswick, this spring," Anderson said.

The most likely areas for flooding this spring will be near the lake shores, especially along Lake Erie and Lake Huron. The continuation of abnormally high water levels in addition to the stormy pattern will increase the risk for lakeshore flooding. 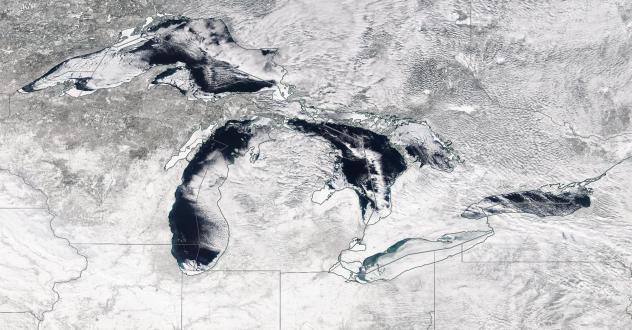 In addition to high water levels, any lingering ice and strong winds associated with storms or fronts can easily lead to more rounds of significant lakeshore flooding on the downwind sides, according to Anderson.

"Lingering ice clearly can delay spring warming near the shore; however, ice that was already relatively low this season and has already begun to break up will not play a major role," he said.

"The prospect for sustained periods of extreme cold the rest of February into March appears to be low at this point. Based on this information, I expect ice coverage on the Great Lakes to remain near to below average into the early spring," Anderson added.

Despite the unsettled weather pattern, temperatures across much of eastern Canada are forecast to climb above average. Above-normal water temperatures in the northwest Atlantic Ocean will play a role.

Sea surface temperatures near Atlantic Canada during the middle of February were about 2-5 degrees Celsius (4-9 degrees Fahrenheit) higher than normal. This will help to keep temperatures in populated areas along the coast well above normal, especially overnight.

AccuWeather’s 2021 severe weather and tornado forecast
6 tips to help prepare for a flood, minimize damage to your home
Temperature bottoms out at 61 below zero in northwestern Canadian town