The Arctic outbreak I blogged about for Valentine's Day extended for another week and is now being called a Siberian cold outbreak after temperatures as low as 50 degrees below zero, that could cause $50 billion in economic impact. It brought repeated ice and snow from Seattle to Texas, then up to Maine. It was so large and impactful, it's a challenge to describe succinctly. Here are some highlights:

It started with warnings covering the nation and models showing low temperatures off the charts for the Central U.S. The cold air plunged temperatures to as low as 50 degrees below zero in Minnesota, while Oklahoma *averaged* just below zero degrees. 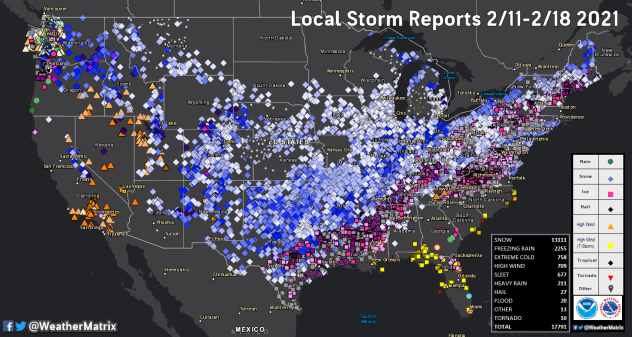 From Feb. 11 to Feb. 18, there were over 13,000 snow Local Storm Reports issued to NWS offices, along with nearly 3,000 freezing rain, ice storm and sleet reports. There were also 758 extreme cold reports, 700 high winds reports as well as everything else from mudslides to lightning to tornadoes -- including an EF2 in Georgia and a deadly EF3 in North Carolina!

With nothing to treat the roads or move the snow, much of Texas and Louisiana were snowed in. Freezing rain fell down to the U.S. Mexico border at Texas' most southern points, including Brownsville. 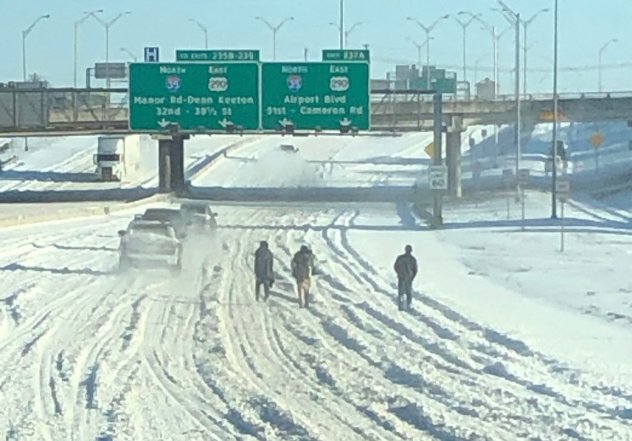 The storm spotter reports shown above illustrate that this was a truly cross-country storm. Reports touched every corner of the country from coast to coast: Seattle, San Diego, Brownsville, Texas, Miami, Florida, and northern Maine. The only state untouched was North Dakota, but even they had a few record-low temperatures there. Speaking of record temperatures... 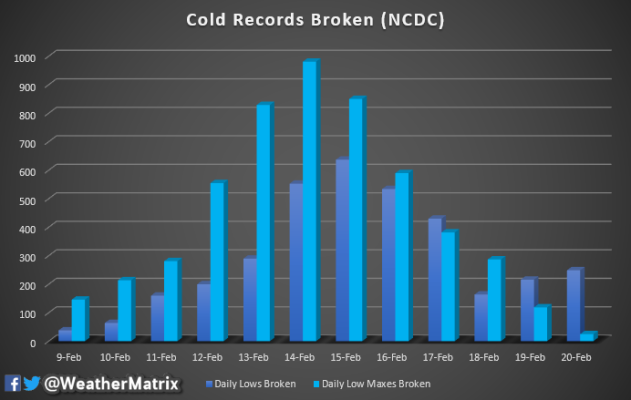 NCDC says there were over 8,900 daily record-low minimums and maximums (those are record cold afternoons) set or tied between Feb. 9 and Feb. 20. Four days in the middle set more than 1,000 daily low temperature records.

Unofficially, I can say this is the biggest cold outbreak I've seen in my last 16 years of blogging (NCDC only allows 1,000 records to be plotted at one time, so I can't show you a map of those, but trust me, it would be impressive.) In addition, there were about 3,000 snow records set as well. 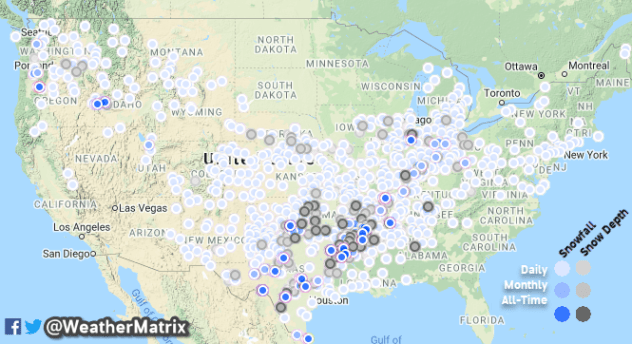 The snow records happened as multiple powerful winter storms swept across the country. One hundred and three stations set or tied all-time records -- they had never seen that much snowfall or snow depth (snow on the ground). Another 324 stations did the same for the month of February.

At one point, 73% of the U.S. was covered in snow, the greatest extent in NOHRSC database, which began in 2003. Only South Carolina, Georgia, and Florida were without it.

73% of the CONUS was covered in snow as of Midnight CST, February 16, modeled by @nwsnwc (NOHRSC). This is the greatest extent on record in the database, which dates back to 2003. pic.twitter.com/hSbWuxANh9

More than 5.6 million customers were without power at the peak of the cold snap, when many of the record-low temperatures were occurring.

Over 5.6 million electric customers are without power across the USA. SPP has initiated load shedding across central USA as severe winter storms and low temps continue to impact the grid. Check out https://t.co/8cAFt3zGJe for #PowerOutage information! [2021-02-16 10:22AM EST] pic.twitter.com/B6qQXJh5T4

As the cold air froze most power equipment in the state, the entire state of Texas dealt with rolling blackouts, and some were without power for more than a week.

If you want to see how the first few days played out, you can read our Live Blog from Feb. 15-18.