An unusually stormy Saturday coast to coast will lead to the coldest Valentine's Day on record for much of the Plains on Sunday, so bundle up, lovers!

UPDATE FEB 14, 2021: Here are the 3 PM ET temperatures -- some love for the Space Coast of Florida with a 90-degree F reading, while it was only 1 degree in the Plains and 15 below zero in Minnesota this Valentine's Day afternoon. 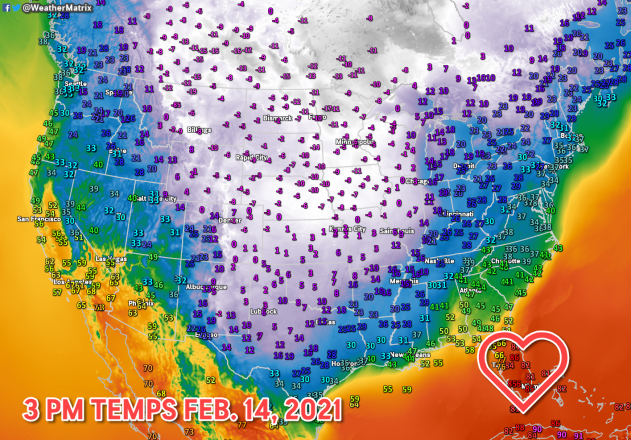 That 90 degrees at Titusville, Florida unofficially breaking their all-time daily and February high temperature, according to CoolWx.com, while hundreds of low afternoon temperature records are being threatened in the Plains. 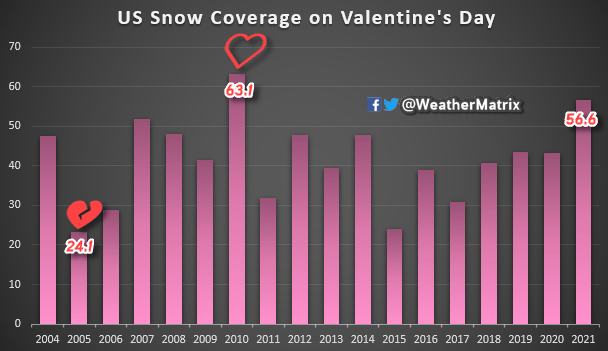 An unusually stormy Saturday coast to coast will lead to the coldest Valentine's Day on record for much of the Plains on Sunday, so bundle up, lovers.

The bad weather really hit the ground running this morning. 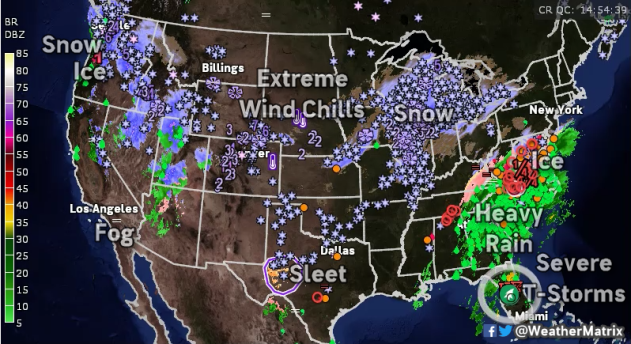 Severe storms were causing wind damage in Florida; a major ice storm was underway in the mid-Atlantic, with heavy rain in the Southeast. Snow was covering the Midwest, up to 10 inches in Indiana and 2-3 inches in Chicago. Extreme wind chills were reported in the Plains, while 31.5" of snow had fallen at multiple stations in southern Wyoming. 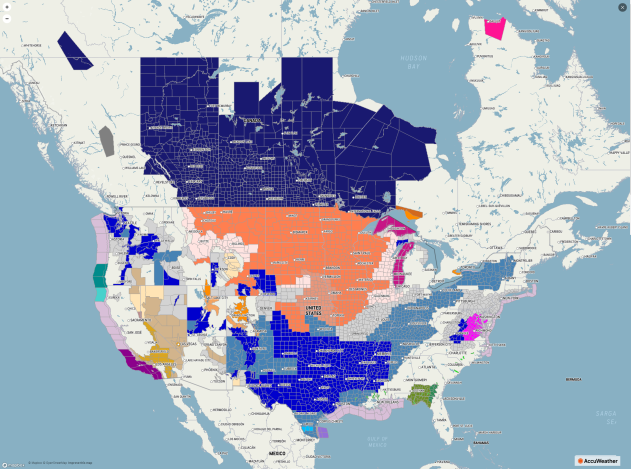 The weather in the afternoon wasn't much better than the morning. 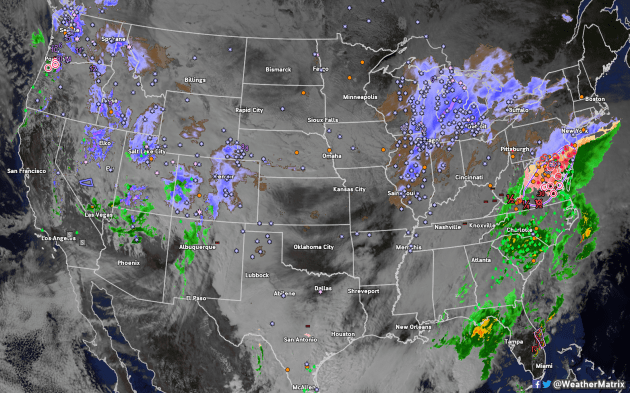 To our north, Canada is experiencing the coldest weather nationwide in 20 years. One station in Canada dropped to -61 degrees F Friday, and a station in Minnesota fell to -50 F this morning -- a new record if confirmed. 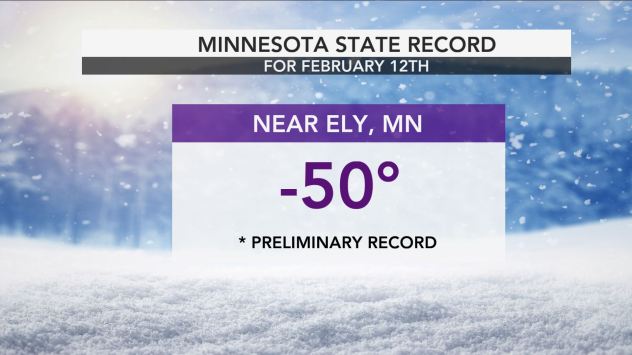 All this weather is a precursor to what will be the coldest Valentine's Day in recorded history for much of the Plains.

Waking up Sunday morning, wind chills will be as low as -58 F in Minnesota, according to the GFS model: 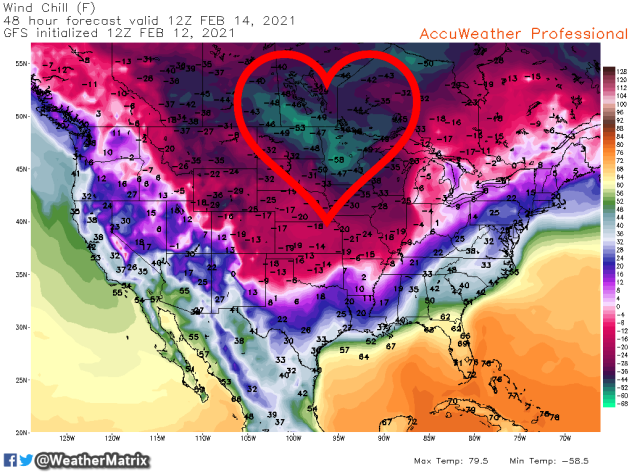 The NWS is predicting that 100 stations will see their lowest afternoon high temperatures in history for February 14th, including every major city in the Plains, with the exception of the Dakotas, but with the addition of Portland, Oregon. 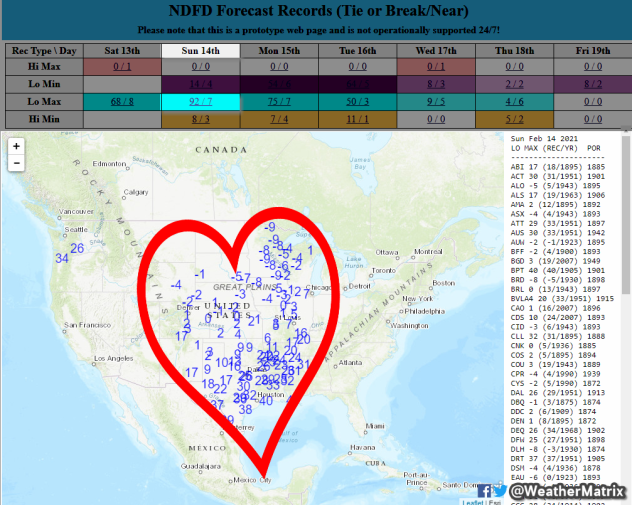 Monday morning, the coldest air will hit, with record lows threatened from Canada to Mexico. 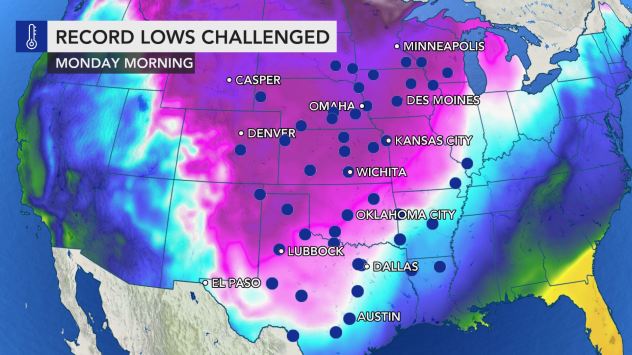 If the HWRF model is correct, low temperatures will be below zero from the Canadian border to Texas, and as low as -35 in Minnesota, Wisconsin, and Nebraska. 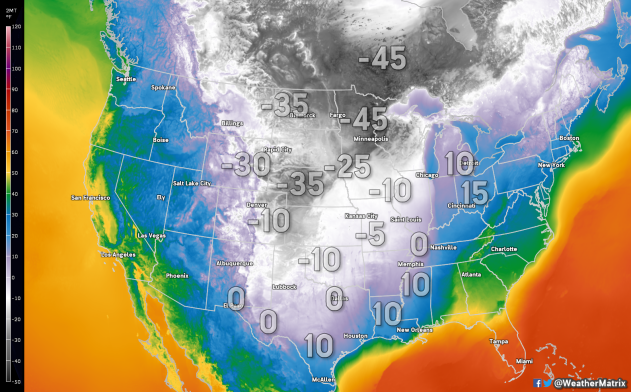 This map overlays those temperatures Monday morning with current power outages, and shows the area likely to get ice (i.e. more power outages) through Tuesday: 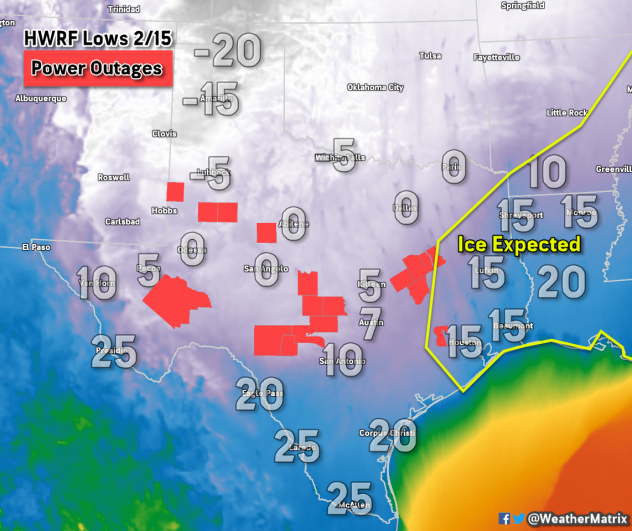 This is not good. If those people's power isn't restored by Monday morning, they will need to be in shelters.

Here's today's insane weather on a loop from 8 AM to 4 PM ET: Wintry precipitation falls across the South