PROGRAMMING ALERT: Hurricane season special premieres on the AccuWeather TV network this week. Get the details.

Feb. 22 (UPI) -- About 10 million people in Texas still don't have safe drinking water on Monday and are relying on the state government to provide bottled water that's in short supply, a week after a rare winter storm rolled in and disrupted treatment plants.

The state lifted water boiling notices Sunday for about 5 million of the 15 million people originally under the order, the Commission on Environmental Quality said. That includes Houston, Texas' largest city.

"The city of Houston boil water notice has been lifted," Mayor Sylvester Turner tweeted late Sunday. "You may use for drinking, cooking, washing." 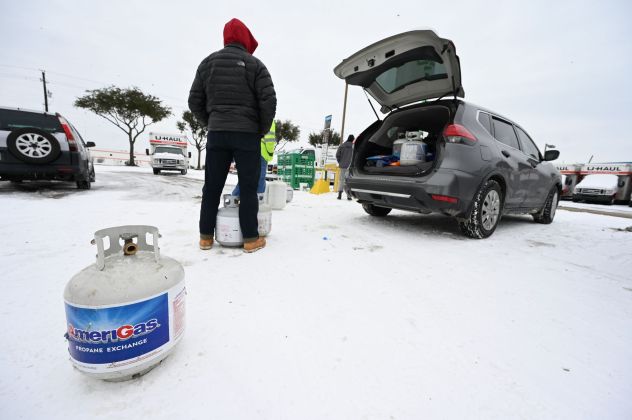 People wait to get propane tanks filled outside Dallas, Texas on Tuesday, February, 16, 2021. Record cold temperatures along with snow and ice blanketed the entire state while an increased demand for electricity caused the state's electric grid to fail leaving millions without power. Photo by Ian Halperin/UPI

"Our community helped each other through tough times and once again showed why we are Houston Strong," he added in a statement.

The government has so far given out almost 4 million bottles of water to residents in need, according to Gov. Greg Abbott, but some distribution sites have run out. A site in Fort Worth went through 50,000 bottles on Sunday.

About one-third of Texas' population of about 30 million people are still without drinkable water, including residents in Dallas, Fort Worth, San Antonio and Austin.

The emergency started last week after a rare bout of freezing cold temperatures, snow and ice arrived in Texas and crippled many of the state's basic services, like water and power. The outage affected water treatment plants, which were forced to shut down and halt operations.

By Monday morning, only about 11,000 customers statewide remained without electricity, according to poweroutage.us. Last week, at peak disruption, more than 4 million in the state were in the dark -- as well as hundreds of thousands of others in neighboring Louisiana and Mississippi.

A major problem now for many Texans is steep sticker shock over their power bills. Because Texas operates its own energy grid and allows customers to opt to pay for power wholesale, that means utilities can charge customers more at peak demand times.

As a result, some customers have seen bills for thousands of dollars for just a few days or weeks of service.

Today I joined the Texas Air Guard, the Texas National Guard & the US military to distribute water to our fellow Texans.

About 3.5 million bottles of water have been delivered.

Thanks to the countless Texans who are pitching in to help out others in need.

Late Sunday, Abbott announced a moratorium to bar power companies from disconnecting any service for nonpayment.

"Texans shouldn't have to face a spike in their energy costs," he tweeted over the weekend. "To quickly address this issue I held an emergency meeting ... to begin crafting solutions."

Officials said federal emergency funds will be used to help pay for some of those bills. President Joe Biden has designated Texas a major disaster area, making it eligible for federal aid.

Abbott said he joined U.S. military and members of Texas' armed forces on Sunday to help distribute bottles of water -- as did Republican Sen. Ted Cruz, who was caught last week jetting to a Mexican resort with his family in the middle of the crisis. He returned after public outrage.

Officials also have closed the largest school districts in the North Texas area for at least Monday and Tuesday. A number of districts also extended their closures in Houston.