This resident's water heater pipe burst above his master bedroom in Houston, Texas, on Feb. 16. They shut the water flow off, but they were then stuck with no water and no electricity.

The United States economy, already unstable from the coronavirus pandemic and restrictions, is now taking another hit from an unprecedented coast-to-coast winter storm. Since last week, at least 47 people have died across the U.S. from the extreme weather conditions as of Thursday evening, The Washington Post reported.

Hypothermia, carbon monoxide poisoning, fires and slipping on ice are among some of the causes of death across the country during the record-breaking cold.

The total damage and economic loss caused by the historic storm could be between $45 and $50 billion, AccuWeather Founder and CEO Dr. Joel N. Myers estimates.

To put the economic toll of the storm into context, AccuWeather’s estimate for the entire 2020 hurricane season, the most active hurricane season on record, was $60-65 billion.

“We have been experiencing one of the stormiest patterns seen in decades,” said Myers, who has been studying the economic impact of severe weather for over 50 years. “The damage has been exacerbated by the record cold temperatures that have pushed all the way to the Gulf Coast this week.” Myers’ expert analysis helps emphasize the magnitude of the life-threatening crisis’s impact and the U.S. financial ramifications.

The estimate is based on an analysis incorporating independent methods to evaluate all direct and indirect impacts of the storm and is based on a variety of sources, statistics and unique techniques AccuWeather uses to estimate the damage.

Myers said that AccuWeather’s estimate includes damage to homes and businesses as well as their contents and cars, job and wage losses, infrastructure damage, auxiliary business losses, medical expenses and closures. The estimates also account for the costs of power outages to businesses and individuals, for economic losses because of highway closures and evacuations and the extraordinary government expenses for cleanup operations.

Citrus crop farmers in South Texas are among many who face major losses due to the extreme cold and wind. The citrus industry in Texas, which is the third-largest citrus-producing state behind California and Florida, took a brutal beating from the combination of excessively low temperatures and wind.

“We will no doubt lose some of the crop as we are seeing some ice build-up inside the fruit. But it will take a couple of weeks to really evaluate,” Dale Murden, the president of Texas Citrus Mutual told AccuWeather Executive Editor Andrew Tavani in an interview.

The ongoing cold air and wind foils growers’ ability to protect the fruit. According to Murden, if temperatures are below 28 degrees Fahrenheit for more than five hours they will begin to freeze inside. “The wind was blowing so hard last night most measures to warm trees up couldn’t work,” Murden said.

The citrus crops faced temperatures as low as 21 degrees for several hours.

"At this time we have about 15% of our crop hanging on the trees, and that is likely lost," said April Flowers of Lone Star Citrus. 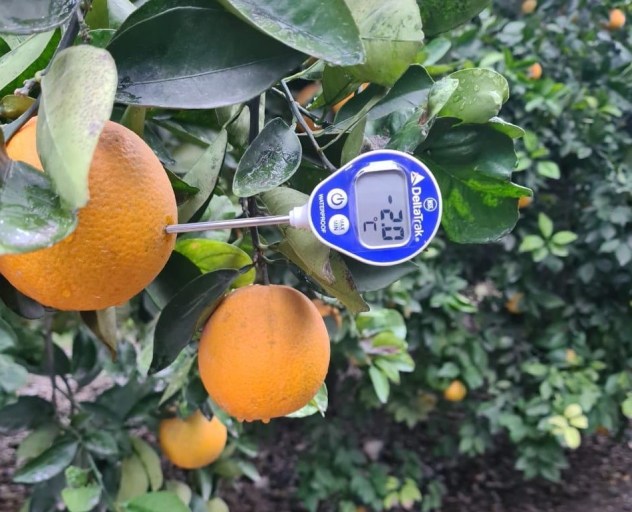 Growers take the temperature of an orange growing on a tree. (Dale Murden)

Pipes have burst in homes and businesses all across Texas as the prolonged, extremely cold air has been too much for houses to handle. Not only will the pipes need to be repaired, but the water gushing out of the pipes likely caused extensive damage to the houses themselves, including the flooring.

“We deal with heat here, not freezing cold,” Houston resident Noel Zepeda said in a video from inside his home. As he walks around, he shows how water is leaking from the ceiling due to a burst pipe with water pouring onto his bed and across the hardwood floor.

“It’s not that we can’t handle the snow, it’s just that we never get this kind of temperatures down here, so our houses are not ready for this,” he added. Watch the video below to see just a glimpse of what it’s like for some Houston residents during this weather disaster.

This resident's water heater pipe burst above his master bedroom in Houston, Texas, yesterday. They shut the water flow off, but they were then stuck with no water and no electricity. https://t.co/woLGK9XEtV pic.twitter.com/UOXZXMcr1p

Power outages in the millions and the freezing temperatures prompted Texas Gov. Greg Abbott to deploy the National Guard to help conduct welfare checks and transport residents in need to one of the 135 warming centers. On Sunday, Joe Biden declared that an emergency exists in the State of Texas and ordered federal assistance to supplement state and local response efforts due to the emergency conditions resulting from a severe winter storm.

This extensive power outage continues to endanger millions of lives. Being prepared can help you and your family stay safe and comfortable. If the power is out, make sure to keep all doors to the outside shut. Use towels to block drafts coming in from window and door cracks. Place generators away from doors, windows and vents that could allow carbon monoxide to come indoors.

Limit non-emergency phone calls during serious situations to minimize network congestion. Texting is better for keeping phone lines open. Put extra clothes on your children and animals or wrap up in blankets.

Many Texans are at their wits' end after enduring coronavirus restrictions and now freezing amid power outages. "To go through all of that and then also to have stuff like this happen, it's like, 'One more [historic] event, and I'm going to develop PTSD,'" Brianna Blake, a mother of two sons, told the Texas Tribune on Wednesday. "I cannot do this."

With so many people affected, there is a need for organized aid and relief. Here is how you can help: