A 32-year-old runner collapsed at the finish line of a half marathon in Brooklyn on Saturday as the Northeast was in the midst of record warmth. Officials are probing whether heat played a role in the fatality. 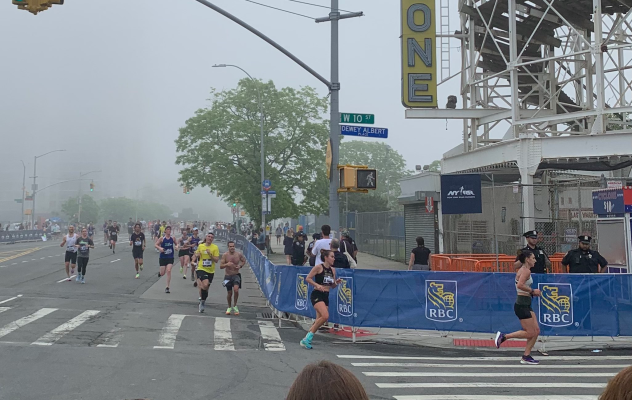 The RBC Brooklyn Half Marathon on May 23, 2022. (Twitter/@NYPDBklynSouth)

At least one runner died and 15 were hospitalized on Saturday in New York City after the RBC Brooklyn Half Marathon, which took place during the early stages of what turned out to be a record-setting hot spell that impacted much of the Northeast over the weekend, including the New York metro area.

Of those who were hospitalized, four were in serious but non-life-threatening condition, with the others suffering minor injuries, according to The New York City Fire Department, The New York Times reported.

As of Monday, it was still unclear if the heat and high humidity played a role in the injuries or the fatality, but the conditions were extreme enough to pose heat-related health hazards to runners.

The race organizers warned participants of the record temperatures in the days leading up to the race. Three days before the event, New York Road Runners posted on Twitter that the risk of heat-related medical issues would increase as the forecast temperature and humidity rose on the day of the event.

After running the 13.1-mile race, 32-year-old David Reichman crossed the finish line and collapsed on the boardwalk. The incident occurred shortly before 9 a.m., about two hours after the race started. When Reichman collapsed, medical workers stationed at the finish line rushed to treat him, according to a spokeswoman at New York Road Runners. Reichman was taken to Coney Island Hospital where he was pronounced dead.

According to the New York Post, the New York City Medical Examiner's office will determine Reichman's cause of death and whether the heat may have played a role.

Reichman was the founder of the mental health and psychotherapy company Field Trip Health, according to the Post. The 32-year-old was a graduate of Concordia University and later attended the New York University Silver School of Social Work. Reichman lived in Flatbush, New York, before moving to Manhattan in March.

The half marathon began at 7 a.m. local time on Saturday morning, when the temperature was 63 degrees Fahrenheit with 97% humidity, giving an AccuWeather RealFeel® of 66. In nearby downtown Manhattan, foggy and misty conditions were reported for the beginning of the race.

When Reichman collapsed just before 9 a.m., the temperature and humidity stayed mainly consistent at 64 degrees Fahrenheit and 96% humidity, with an AccuWeather RealFeel® of 69. After the race, temperatures climbed to 90 at around 6 p.m., which was the city's first 90-degree reading of the year -- and the first time the official high temperature, which is recorded in Central Park, reached 90 since Aug. 27, 2021, when the mercury topped out at 93.

This was the first year the RBC Brooklyn Half Marathon was held since 2019, due to coronavirus-related cancelations in 2020 and 2021. The race began at the Brooklyn Museum and ended at the Coney Island boardwalk.