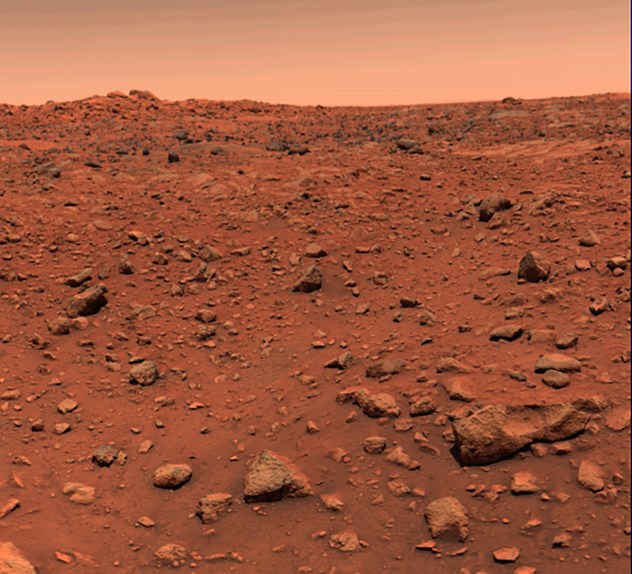 Viking 1 captured a color photo of its Martian landing site on July 21, 1976, the day after touching down, showing a surprisingly rocky view of the surface. (NASA)

(CNN) -- When NASA's Viking 1 lander made history as the first spacecraft to touch down on Mars on July 20, 1976, it sent back images of a landscape no one was expecting.

Those first images taken from the ground there showed a surprisingly boulder-strewn surface in the red planet's northern equatorial region, rather than the smooth plains and flood channels expected based on images of the area taken from space.

The mystery of the Viking landing site has long puzzled scientists, who believe an ocean once existed there.

Now, new research suggests that the lander touched down where a Martian megatsunami deposited materials 3.4 billion years ago, according to a study published Thursday in the journal Scientific Reports.

The catastrophic event likely occurred when an asteroid slammed into the shallow Martian ocean — similar to the Chicxulub asteroid impact that wiped out dinosaurs on Earth 66 million years ago, according to researchers.

Five years before the Viking I landing, NASA's Mariner 9 spacecraft had orbited Mars, spotting the first landscapes on another planet that suggested evidence of ancient flood channels there.

The interest in the potential for life on the red planet prompted scientists to select its northern equatorial region, Chryse Planitia, as the first Martian landing site for Viking I.

"The lander was designed to seek evidence of extant life on the Martian surface, so to select a suitable landing site, the engineers and scientists at the time faced the arduous task of using some of the planet's earliest acquired images, accompanied by Earth-based radar probing of the planet's surface," said lead study author Alexis Rodriguez, senior scientist at the Planetary Science Institute in Tucson, Arizona, via email.

"The landing site selection needed to fulfill a critical requirement — the presence of extensive evidence of former surface water. On Earth, life always requires the presence of water to exist." 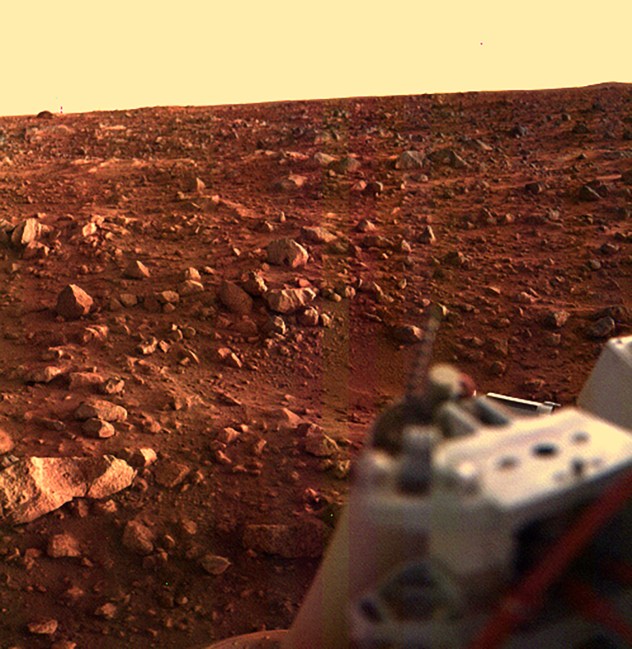 At first, scientists thought the rocky surface might be a thick layer of debris left behind due to space rocks crashing into Mars and creating craters, or broken pieces of lava.

But there weren't enough craters nearby, and lava fragments proved rare on the ground at the site.

"Our investigation provides a new solution — that a megatsunami washed ashore, emplacing sediments on which, about 3.4 billion years later, the Viking 1 lander touched down," Rodriguez said.

The researchers believe the tsunami occurred when an asteroid or comet hit the planet's northern ocean. But finding a resulting impact crater has been difficult.

Rodriguez and his team studied maps of the Martian surface created from different missions and analyzed a newly identified crater that seemed to be the likely point of impact.

The crater is 68 miles (nearly 110 kilometers) across in part of the northern lowlands — an area once likely covered in ocean. Researchers simulated collisions in this region using modeling to determine what impact was necessary to create what's known as the Pohl crater.

For perspective, the most powerful nuclear bomb ever tested, Tsar Bomba, created 57 megatons of TNT energy.

During simulations, both impacts created a crater with Pohl's dimensions — as well as a megatsunami that reached 932 miles (1,500 kilometers) from the impact site.

The 1.8-mile asteroid generated a tsunami that measured 820 feet (250 meters) tall once it reached land.

The results were similar to those of the Chicxulub impact on Earth, which created a crater that was initially 62 miles (100 kilometers) across and triggered a towering tsunami that traveled around the world.

The impact likely sent water vapor up into the atmosphere, which would have affected the Martian climate and potentially created snow or rain in the fallout. Vast amounts of water from the shallow ocean, as well as sediments, would have been displaced, Rodriguez said, although most of the water returned to the ocean soon after the megatsunami reached its peak.

"The seismic shaking associated with the impact would have been so intense that it could have dislodged sea floor materials into the megatsunami," said study coauthor Darrel Robertson at NASA's Ames Research Center in California's Silicon Valley, in a statement.

It's also possible that the megatsunami reached the location of the 1997 landing site for the Pathfinder, south of where Viking 1 landed, and even contributed to the formation of an inland sea.

If so, then the two landers touched down at the site of ancient marine environments.

"The ocean is thought to have been groundwater-fed from aquifers that likely formed much earlier in Martian history — over 3.7 billion years ago — when the planet was 'Earth-like' with rivers, lakes, seas, and a primordial ocean," Rodriguez said.

Next, the team wants to investigate Pohl crater as a potential landing site for a future rover, since the location might contain evidence of ancient life.

"Right after its formation, the crater would have generated submarine hydrothermal systems lasting tens of thousands of years, providing energy and nutrient-rich environments," Rodriguez said, referring to the heat generated by the asteroid impact.