NOAA plane, Miss Piggy, flew over the Caribbean into the center of Hurricane Isaias on July 31. The plane helps gather data for forecasters to prepare advisories.

NASA plans for the spacecraft, named Endeavour by the astronauts aboard, to undock from the International Space Station at 7:34 p.m. EDT Saturday and splash down at 2:42 p.m. Sunday.

That is around the time the National Hurricane Center predicts Hurricane Isaias will arrive near the coast of central Florida and close to what could have been the primary splashdown site.

"We're going to watch the weather very carefully," said Steve Stich, manager of the agency's Commercial Crew Program. "This is a test flight, and we're going to take our time to come home. We have plenty of opportunities here in August, and we're in no hurry." 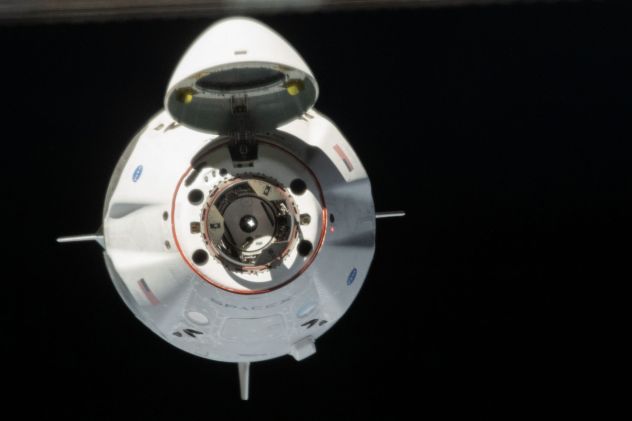 SpaceX's Dragonship Endeavor, with NASA astronauts Robert Behnken and Douglas Hurley on board, docks with the International Space Station at 10:16 am EST on May 31, 2020, following the successful launch of the Crew Demo-2 mission from NASA's Kennedy Space Center in Florida, the day before. The Crew Dragon's nose cone is open revealing the spacecraft's docking mechanism that would connect to the Harmony module's forward International Docking Adapter. NASA/UPI

The schedule has astronauts traveling for more than 19 hours in the capsule, but they could spend up to three or four days above Earth if needed, Stich said.

For example, if the track of the hurricane shifted unexpectedly and made it impossible to land, the astronauts could remain in orbit until the storm passed and seas calmed.

Astronauts Doug Hurley and Bob Behnken will return after two months in space. They made history when they flew the capsule to the space station May 31 -- the first crewed launch from U.S. soil in nine years.

The two said during a press conference from space Friday that they enjoyed their time on the space station, especially Behnken's four spacewalks with fellow astronaut Chris Cassidy, who will remain there. Hurley helped the spacewalkers from inside.

The astronauts acknowledged weather is their primary concern about the return, but said they weren't going to worry about potential delays.

"We don't control the weather, and we know we can stay up here longer -- there's more chow and I know the space station programs have more work that we can do," Behnken said.

Behnken said he will have a few tips for his wife, Meghan McArthur, who is scheduled to sit in his seat on the Dragon during a flight to the International Space Station later this year, notably "where best to pack all your personal items so that you can get to them conveniently."

The SpaceX mission is considered a demonstration flight -- a final step before the capsule is fully certified for regular ferry service to the space station.

The return to Earth would mark the first splashdown of a U.S. space capsule carrying astronauts since the Apollo-Soyuz Test Project that was launched from Kennedy Space Center in 1975. It was the final flight of the Apollo spacecraft.

The astronauts anticipate they might become seasick and nauseated after they land in the water, probably the Gulf of Mexico, Hurley said.

"There are bags, if you need them, and we'll have those handy. We'll probably have some towels handy, as well. And, you know ... it certainly wouldn't be the first time that that's happened in a space vehicle, but it will be the first time in this particular vehicle if we do," Hurley said.

The seven potential Florida splashdown sites for Crew Dragon are off the coasts of Pensacola, Tampa, Tallahassee, Panama City, Cape Canaveral, Daytona Beach and Jacksonville. As of Friday, Hurley said splashdown most likely will be in the Gulf because of Hurricane Isaias off the state's east coast.

NASA said it would make a decision on the primary splashdown target about six hours before the undocking.

About 40 workers from NASA and SpaceX will be stationed on each of two recovery ships to retrieve the astronauts from their capsules -- one in the Gulf and one in the Atlantic Ocean.

Crew Dragon will travel about 17,500 mph as it re-enters the atmosphere. The re-entry will create a communications blackout, expected to last about six minutes.

Dragon Endeavour has two sets of parachutes will that deploy once back inside Earth's atmosphere to slow the capsule before splashdown. The recovery vessel is expected to secure the astronauts within an hour.

Behnken completed four spacewalks while aboard the space station. The mission had been planned to last just five days, but it was extended so Behnken could help finish a years-long project to upgrade the power system.

No issues with the capsule have been reported -- a situation described by a SpaceX commentator as "pretty boring for the astronauts, but that's what we wanted."

SpaceX secured a contract to provide ferry service to the space station for a fixed cost in 2014, and developed the rocket and capsule with NASA's cooperation.

If the flight home is successful, NASA plans to launch another SpaceX capsule to the space station in September, officials said.

Crew members for that mission are to be NASA astronauts Mike Hopkins, Victor Glover and Shannon Walker, along with Soichi Noguchi from the Japan Aerospace Exploration Agency.

Over the past decade, NASA astronauts only used Russian Soyuz rockets and capsules to reach the space station, at a cost of more than $70 million per seat.

Behnken, 49, and Hurley, 53, have been astronauts since their selection in 2000. They worked closely with SpaceX to develop the new spacecraft systems.