The intense explosion rocked Earth about 12,000 years ago, turning sand into glass and unleashing tornado-force winds. The research team says it also offers clues into a mysterious disappearance.

And the findings are out of this world.

The Atacama Desert in northern Chile is one of the driest places on Earth, but it is not the weather that has left scientists puzzled, but the glass that is scattered across a large region of the desert.

Deposits of the black and dark green silicate glass are strewn across a region nearly 50 miles long around the town of Pica, Chile, with chunks of glass measuring nearly 2 feet across.

There have been many different theories about where the glass came from. Some focused on volcanoes or ancient fires, but the proper evidence to confirm such theories was never produced.

New research published in the journal Geology on Nov. 2 says that the glass came to be after an extraterrestrial intervention. 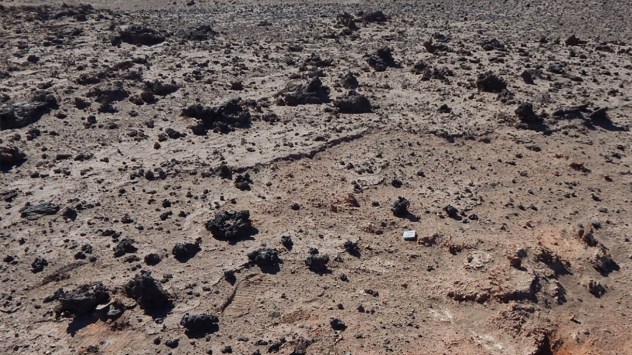 New research finds that the dark silicate glass strewn across a vast swath of the Atacama Desert was created by an exploding comet around 12,000 years ago. (Image/P.H. Schultz, Brown University)

However, the otherworldly influence was not aliens, but a comet.

Researchers carefully analyzed samples of the twisted silicate glass and discovered dust from meteorites embedded in the glass.

Minerals such as cubanite, troilite and calcium-aluminum-rich inclusions found in the glass were also found in debris from a comet that was collected during NASA’s Stardust mission, according to Brown University, where several of the researchers are from.

“Those minerals are what tell us that this object has all the markings of a comet,” said Scott Harris, a planetary geologist at the Fernbank Science Center in Druid Hills, Georgia, and study co-author.

This evidence has led scientists to believe that a comet plunged through Earth’s atmosphere and exploded over the Atacama Desert around 12,000 years ago. This explosion scorched the region with such heat and ferocity that it turned the desert sand into glass.

“To have such a dramatic effect on such a large area, this was a truly massive explosion. Lots of us have seen bolide fireballs streaking across the sky, but those are tiny blips compared to this,” said Pete Schultz, a professor emeritus in Brown University’s Department of Earth, Environmental and Planetary Sciences.

The exploding comet also created tornado-force winds which hurtled the chunks of molten glass across the region. 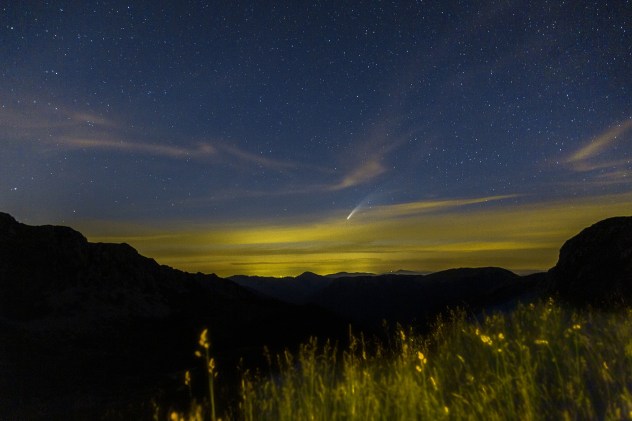 A comet glowing in the night sky just above the horizon. (Image/Alberto Agostini)

The fallout from the cataclysmic event could have done more than just transform the desert landscape to glass.

According to Schultz, around the time that the comet exploded over the desert is also around the same time that all of the large mammals that once inhabited the region disappeared.

“It’s too soon to say if there was a causal connection or not, but what we can say is that this event did happen around the same time as when we think the megafauna disappeared, which is intriguing,” Schultz said.

The extremely dry climate in this region of Chile could have helped to preserve some of the samples over the thousands of years since the comet’s arrival.

An exploding space rock is just one of the ways that sand can be transformed into glass.

A more common way for this mutation to occur is for lightning to strike a sandy landscape.

The temperature of a lightning bolt can exceed 3,200 degrees Fahrenheit, which is hot enough to fuse the sand together to create silica glass, according to Discover Magazine. This natural occurrence created what is known as petrified lightning, a hallow branch-shaped tube that almost resembles a lightning bolt.