Along with an increased risk for tornadoes, areas from Pittsburgh to Maine will be on guard for damaging winds from heavy thunderstorms.

Heavy thunderstorms roared through New York state, New Jersey and Pennsylvania Sunday and Monday night, and AccuWeather forecasters expect additional rounds of severe weather to rumble through the Northeast this week. The most dangerous and widespread severe weather will erupt Wednesday.

"Some exceptionally warm and humid air for mid-September is expected to remain in place over the eastern region through midweek," said AccuWeather Senior Meteorologist Carl Babinski.

New York City is expected to have temperatures rise into the middle 80s Fahrenheit Wednesday -- the highest temperatures have been all September. Generally, the Big Apple reports high temperatures in the upper 70s this time of year. Meanwhile, temperatures in Philadelphia can soar to near 90 F through midweek, nearly 10 degrees above the typical average of 80 F. Humidity will make these conditions feel even worse, as the AccuWeather RealFeel® Temperatures skyrocket well above average.

"This is expected to be a key ingredient which can fuel strong to locally severe thunderstorms in the Northeast, especially on Wednesday and early Wednesday night," said Babinski.

Thunderstorms that arrived on Monday night brought damaging winds and heavy rain to Pennsylvania and New Jersey. A new round of storms took shape over part of the Great Lakes region on Tuesday afternoon and could rumble over the Ohio Valley and western New York states through Tuesday night. However, the biggest concern for the northeastern U.S. lies on Wednesday, when the chance for a tornado returns to areas farther east.

Severe weather is most likely from Pennsylvania to Maine on Wednesday. Storms will move through parts of New York, New Jersey, Connecticut, Vermont, New Hampshire and Massachusetts as well. Cities that could be impacted include Albany, New York; Scranton, Pennsylvania, and Springfield, Massachusetts. The National Weather Service's Storm Prediction Center estimates that close to 10 million residents will be under a slight risk of severe weather. 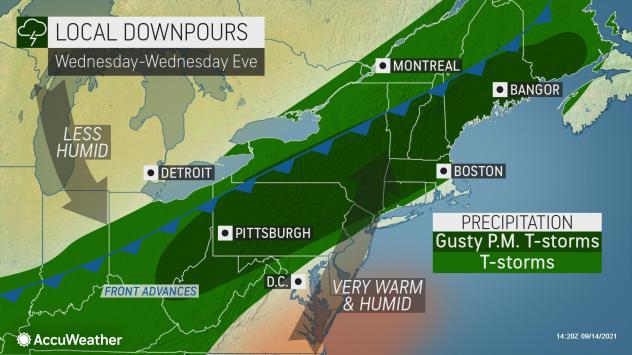 Forecasters say residents should ensure they have a way to receive severe weather warnings as Wednesday grows closer. Motorists traveling on highways such as Interstates 80, 81, 84, 89 and 91 as well as portions of the New York Thruway should prepare for changing levels of visibility as well as debris from wind damage that could spill onto roadways.

"There is the risk of isolated tornadoes during Wednesday afternoon and evening, especially in parts of New England and eastern upstate New York," Anderson said. 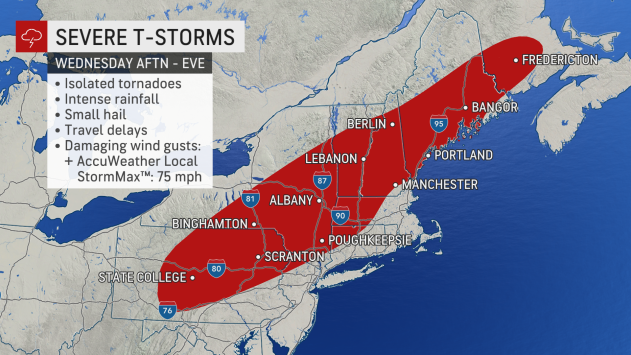 Forecasters say residents should prepare for possible power outages across the region as winds can damage trees and power lines. Helpful things to keep on hand during times of severe weather are flashlights and first aid kits, and experts recommend charging cell phones ahead of time.

"AccuWeather forecasters will continue to monitor a cold front as it pushes to the south and east on Thursday, since it may also manage to generate additional heavy thunderstorms, primarily in the mid-Atlantic region," said Babinski.

Though severe weather isn't currently anticipated immediately following Wednesday's event, downpours are possible in some areas late this week and this weekend from any interaction with a tropical system brewing northeast of the Bahamas. Any downpours could easily trigger renewed flash flooding following excessive rainfall and deadly flooding that has occurred in parts of the Northeast in recent weeks.

Why was Ida so devastating to the Northeast?
Summer 2021 edges out 'Dust Bowl' summer as hottest ever for US
How do you like them apples? Tiny micro fruit survives in Earth's coldest city