Intense tropical downpours will bring much-needed rain to the drought-stricken Southwest, but the amount of precipitation could increase the risk of life-threatening flash flooding.

An impressive monsoon season in the southwestern United States has brought many scenes of flash flooding, in particular to Las Vegas where floodwaters turned the famous Las Vegas Strip into a river last week. AccuWeather meteorologists warn that tropical moisture could bring more widespread downpours through the weekend.

A surge of moisture from a tropical rainstorm that brought torrential rainfall to Texas this past weekend and Monday will continue to spread into the interior Southwest through this upcoming weekend.

The ongoing North American monsoon will tap into the tropical moisture, fueling rain as far inland as Albuquerque, Phoenix and even Las Vegas. As of Wednesday morning, heavy rain was falling across areas of New Mexico and along the U.S.-Mexico border, also bringing along heavy wind gusts such as a 58 mph gust in Wickenburg, Arizona. This area of heavier rain continued to slowly track west through Thursday. 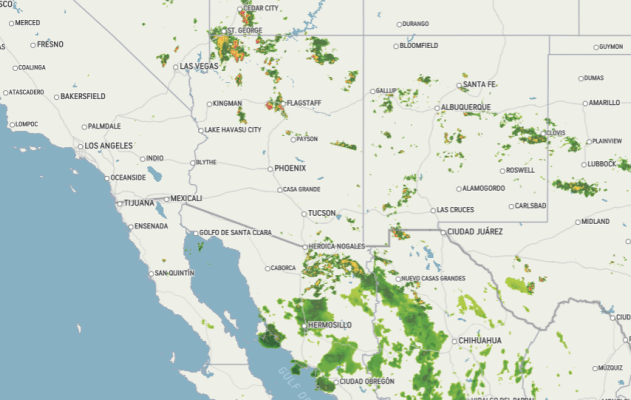 "The storm will then get absorbed into existing moisture over the southwestern U.S. and will help to enhance precipitation across Arizona and New Mexico into the weekend," AccuWeather Meteorologist Alex DaSilva explained.

While the rainfall will be largely beneficial across the Southwest due to the ongoing drought, the extra surge of moisture could lead to heavier downpours that could trigger episodes of flash flooding. These rounds of heavier rainfall could continue to impact parts of the Southwest even into next weekend. 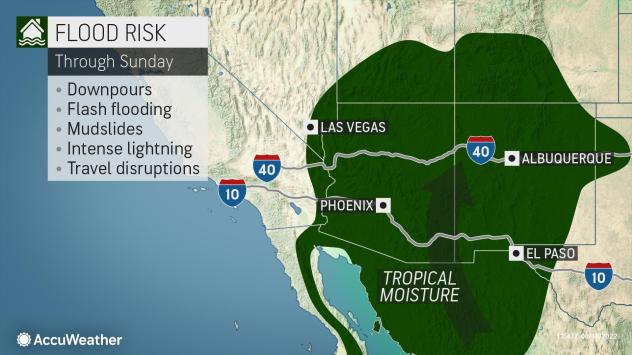 The same area has been inundated with heavy rainfall in the last month. Las Vegas is currently experiencing its wettest monsoon season in 10 years. On the evening of July 28, Sin City was drenched with a month's worth of rain in less than two hours.

This surge of tropical moisture could make problems even worse for some as there will be a risk of flash flooding and even mudslides in the higher elevations or near burn scars from recent wildfires.

While a general 1 to 2 inches of rain is expected from Yuma, Arizona, to Las Vegas, into the Wasatch range in Utah and over into the Colorado Rockies and New Mexico, an area of 2-4 inches can be expected along the Sierra Madre in northern Coahuila, Mexico, southeastern Arizona, southwestern New Mexico and the mountains of northern New Mexico.

"The greatest chance of flash flooding will occur on Friday and Saturday across the region before the monsoon returns to near normal levels by early next week," DaSilva continued. 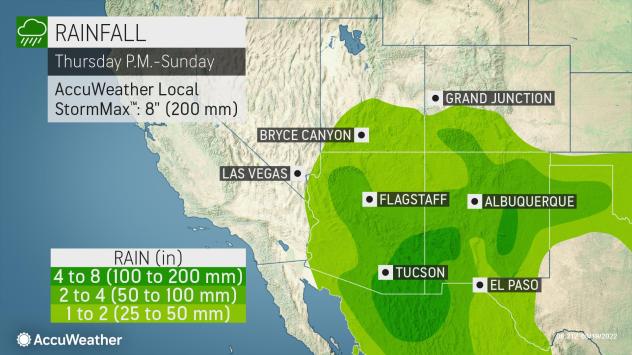 Despite the already active monsoon season, any rain from this tropical rainstorm will be very beneficial to the Southwest as most of the region is currently in severe or extreme drought, according to the U.S. Drought Monitor. Tucson, Arizona, for example, has received only 2.70 inches of rain so far in 2022, which is only 43% of its normal rain to date. Phoenix has received only 42% of its normal rainfall so far this year.

On the flip side of the coin, other areas of the Southwest have been bombarded by rainfall. Albuquerque, New Mexico, has already recorded 85% of its normal rainfall for the entire month of August through Aug. 18. Yuma, Arizona, recorded 0.54 of an inch of rain so far in August, which is 270% of normal.