Las Vegas is now in the middle of its wettest monsoon season in a decade after drenching storms wreaked havoc around the city on Thursday.

Pockets of heavy rain and thunderstorms swept across the Southwest on Thursday night, prompting flash flood warnings in southern Nevada, far southeastern California and Arizona. The gusty storms knocked out power to many Las Vegas residents and flooded numerous roadways, including the famous Las Vegas Strip.

The Las Vegas Metropolitan Police Department announced on Friday afternoon that a body was found in a flood wash near the Las Vegas Strip. This was the second body discovered in the same wash near Giles and Mandalay Road. The Clark County Fire Department stated that both deaths were likely the result of people living in the tunnel system that became trapped when the heavy rain occurred on Thursday.

Harry Reid International Airport in Las Vegas recorded 0.58 of an inch of rainfall from thunderstorms in just an hour, nearly double what the site typically observes for August. Surrounding neighborhoods picked up anywhere between 0.25 and 0.75 of an inch of rain from the storms. Thursday was also the wettest day at the airport since March 12, 2020. 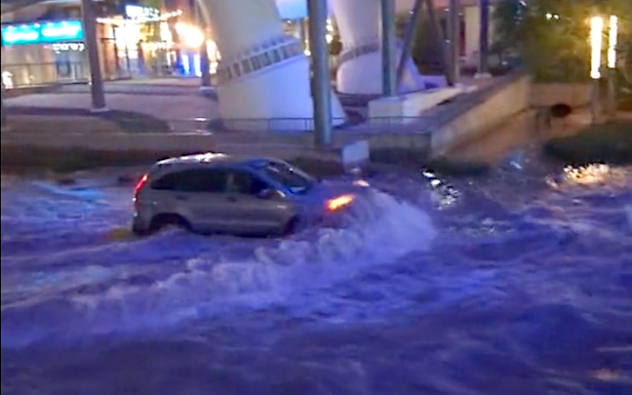 A car drives through floodwaters near the Las Vegas Strip on Thursday, Aug. 11. (Twitter user @Skittishandbus via Storyful)

Las Vegas is now up to 1.28 inches of rainfall this monsoon season, which lasts from June 15 to Sept. 30 in the Southwest. According to the National Weather Service, this has been Las Vegas' wettest monsoon season since 2012.

The short burst of heavy rain was enough to flood Las Vegas Boulevard and temporarily strand tourists in their resorts. Casino guests captured videos of rain pouring in through the ceilings of Caesars Palace and Planet Hollywood among other businesses. Weeks ago, a similar scene played out across the Las Vegas Strip with multiple cases of water damage and flooded casinos due to the monsoon moisture.

Footage of vehicles attempting to drive through the floodwaters was posted to social media late Thursday evening. Flowing water swept through the ground floors of nearby parking garages.

Lightning from the storms lit up the glowing neon Las Vegas landscape even more Thursday night. According to KLAS-TV in Las Vegas, the frequent lightning was blamed for setting a tree ablaze in a North Las Vegas neighborhood.

As the storms shifted across the Las Vegas valley, observed wind gusts at the Harry Reid International Airport reached speeds of 55 mph. A sensor at Allegiant Stadium, home of the NFL's Las Vegas Raiders, even recorded a thunderstorm gust of 64 mph, according to the National Weather Service's Storm Prediction Center. By 11 p.m. PDT Thursday, more than 12,000 Nevada Energy customers were without power.

The number of outages in the Las Vegas area gradually declined throughout the early morning hours on Friday as crews worked to restore electricity, according to PowerOutage.US.

Quite the storm blowing into the forecast office now! #VegasWeather pic.twitter.com/I716vDaaNv

Select rivers and washes, including Moenkopi Wash near Tuba City, Arizona, surpassed major flood stage after rounds of rainfall drenched the region. Tuba City is located in the northern part of the state, about 73 miles north of Flagstaff.

Additional rain and thunderstorms are expected to erupt once again across the Southwest through the end of the weekend, AccuWeather forecasters say.