Excessive heat has roasted a large swath of China for weeks and set all-time highs in spots. Forecasters say a break in the heat is not expected in the short term.

About a month after Shanghai, the most populated city in China, endured a dangerous heat wave that sent the mercury to over 100 degrees Fahrenheit, the intense heat has shifted west into central China where residents have endured one of the worst stretches of excessive heat in decades.

Portions of the Yangtze, China's longest river, remain depleted as the heat and lack of rain have caused major impacts to crops in the region, and AccuWeather meteorologists warn that the heat is not expected to ease any time soon.

On Aug. 13, the China Meteorological Administration (CMA) activated a level three emergency response to address this unprecedented heat wave, which requires all meteorological entities in the affected region to keep the general public up to date with the latest weather information during this time of extreme weather, according to the CMA's website. 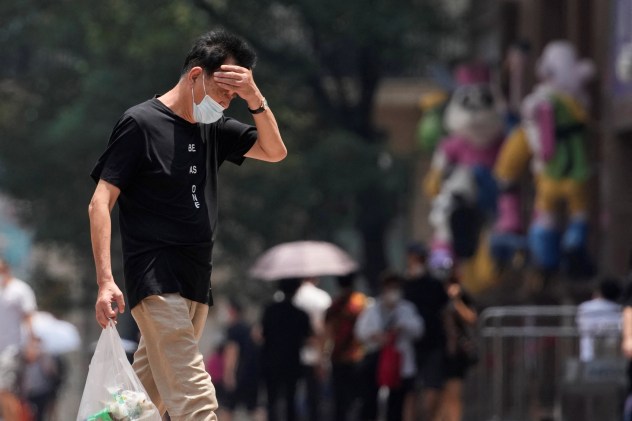 By Tuesday afternoon, the CMA placed the provinces of Hubei and Jiangxi, home to about 100 million people, under red alerts, the highest level of the CMA's three-tiered warning system. A red alert is issued when the temperature is expected to reach 104 F (40 C) in the next 24 hours.

The heat wave is expected to continue for at least the next couple of weeks which would make this the longest period of extreme heat in this region of China since records began in 1961, according to a report from Reuters, which cited China's official Science and Technology Daily on Monday.

Officials in areas affected by the declining water levels around the Yangtze have started to deploy pumps and cloud-seeding rockets, according to Reuters. Rainfall amounts in the river's drainage area were down about 30% in July and are 60% lower than normal in August, Reuters reported.

Although this is the time of year that China normally experiences its hottest weather, observed afternoon high temperatures have surpassed record levels reaching 15 to 25 degrees F above normal, specifically in the Chongqing district and Sichuan province located in central China.

"A strong ridge of high pressure has persisted over a large portion of China during the past several weeks, resulting in extreme heat that has resulted in an increased power demand, forcing some factories to close to preserve the power grid, and crop yields to suffer," AccuWeather Meteorologist Tony Zartman said. 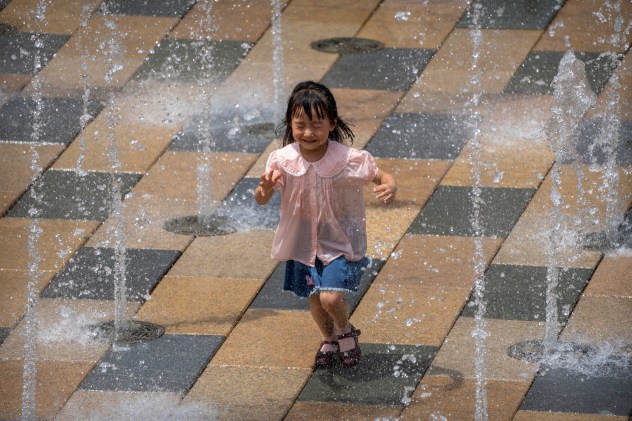 FILE - A girl runs through a fountain at an outdoor shopping area on an unseasonably hot day in Beijing, Saturday, June 25, 2022. From the snowcapped peaks of Tibet to the tropical island of Hainan, China is sweltering under the worst heat wave in decades while rainfall hit records in June. (AP Photo/Mark Schiefelbein, File)

In Chongqing, the capital city of the district of Chongqing, temperatures reached a staggering 109 F Monday, over 15 degrees above the normal afternoon high of 92 F this time of year. Monday was not the only day that the metropolitan area reached temperatures in the triple digits this month. The last time the city had a day below 100 was on July 28 when the afternoon high was 97 F. This makes this summer the second-hottest since records began in 1961. More than 16 million live in the city itself, while the population is around 30 million when accounting for the surrounding areas.

On Tuesday, the city of Chongqing measured a high temperature of 110 F continuing the unrelenting heat wave that has gripped the region for all of August.

Even areas farther east have had their fair share of stifling heat. High temperatures climbed to 112 F Monday in Fengjie, China, which was the highest maximum temperature recorded in the country that day. The new all-time provincial record for Sichuan was shattered as the city of Qu recorded a high of 110 F Monday.

"There really isn’t any short-term relief in sight with high temperatures forecast to be 100 F [or higher] through at least the middle of next week," Zartman said.

Daily record highs are anticipated to be shattered over the coming days as the dome of unrelenting heat persists over the middle of the country this week through next week.