Lightning put on a show as it scattered across the night sky over Greensboro, North Carolina, on July 5.

Just one state of India has accounted for more than 150 lightning deaths in just 14 days.

The state of Bihar, nestled between Bangladesh and southern Nepal, is one of the poorest states in all of India and has been inundated with rounds of rain and thunderstorms since the last week of June.

The AFP reported on Tuesday that the deaths from lightning in Bihar, India, reached 147 in just 10 days' time. More than two dozen of these deaths came on just Saturday, July 4. Additional deaths through the beginning of this week took that number to over 150.

A total of 215 people have been killed so far this year across the state. Nearly all of the deaths have been farmers, rural laborers and cattle graziers. 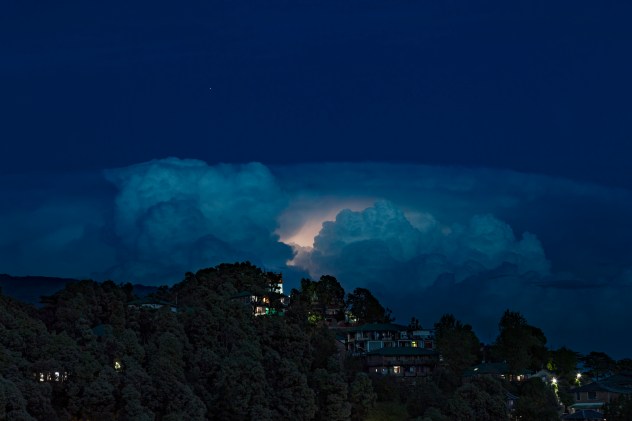 A flash of lightning lights up a raincloud hovering over a township in Dharmsala, India, Sunday, April 19, 2020. (AP Photo/Ashwini Bhatia)

During the entirety of the monsoon season last year, about 170 deaths were attributed to lightning in Bihar.

In neighboring Uttar Pradesh, just over 200 people have been killed by lightning since April of this year. A total of 239 lightning deaths were reported in the state during the entirety of 2019.

More frequent and widespread thunderstorms are common during the southwest monsoon period, which impacts India from late May or early June through the middle of October. During this time, excess moisture pushes through India, helping to create the right environment for showers and thunderstorms.

According to the India Meteorological Department, the onset of the 2020 southwest monsoon across Bihar was ahead of schedule by several days.

In 2018, India's National Crime Records Bureau reported that lightning caused 2,357 deaths across the whole country throughout the year.

India averages at least 2,000 to 3,000 lightning-related deaths each year, according to the Hindustan Times.

Bihar's Disaster Management Minister, Lakshmeshwar Rai, said he was briefed by scientists, weather experts and officials who attributed the "rising temperatures due to climate change" as "the main cause behind the increasing lightning strikes".